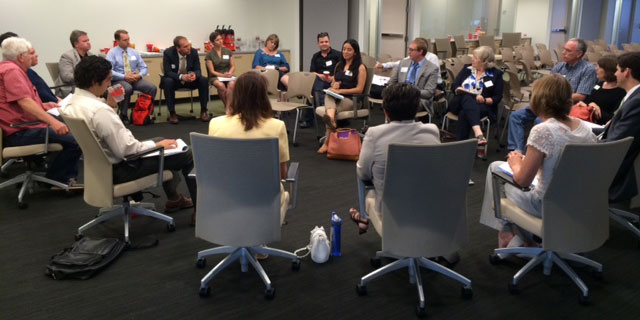 The U.S. Department of Commerce joins the Denver Metro Chamber of Commerce, the Mile High United Way, the Office of Governor John Hickenlooper, the Office of Mayor Michael Hancock, and Opportunity Nation to co-host the Denver Business and Community Partnerships Summit.

Ed. note: This is cross-posted on the U.S. Department of Commerce's blog. See the original post here.

On Monday, the U.S. Department of Commerce joined the Denver Metro Chamber of Commerce, the Mile High United Way, the Office of Governor John Hickenlooper, the Office of Mayor Michael Hancock and Opportunity Nation to co-host the Denver Business and Community Partnerships Summit. This first-of-its-kind event highlighted innovative ways businesses are partnering with nonprofits, faith-based organizations, institutes of higher education and the public sector to improve their communities. In addition to promoting effective cross-sector partnership models focused on workforce development, healthy communities, education and the environment, the Summit educated participants on resources offered by the federal government and provided people an opportunity to connect with others in their community interested in partnering to effect positive change. Leaders from more than 130 organizations, including over 50 businesses and more than 60 nonprofits, participated in this inaugural event. Jay Williams, U.S. Assistant Secretary of Commerce for Economic Development, joined Congressman Ed Perlmutter in delivering keynote remarks.

This was an important convening for the Commerce Department because it showcased the critical function that innovative partnerships between community-based organizations and the business community play in driving positive local development, particularly in the areas of skills and workforce training and education. The Summit also exhibited the significant contributions of multiple Commerce resources in facilitating effective community partnerships, including Economic Development Administration grants and Census data from the American Communities Survey.

The Economic Development Administration (EDA) played a particularly prominent role in the Summit. With one of its six regional offices situated in the heart of Denver, EDA and its investments are well-known and respected in the community. Assistant Secretary Jay Williams highlighted the work of the Denver office, while also pointing to the ways in which cross-sector partnerships promoted positive community development in Youngstown, Ohio during his tenure as mayor. He further discussed the multiple ways in which EDA is working around the country to revitalize hard-hit cities and towns and create lasting jobs at the local level.

In addition to remarks from Assistant Secretary Williams and Congressman Perlmutter, the event provided participants with a chance to hear from expert practitioners doing effective partnership work across Colorado. Attendees also engaged in issue-based breakout sessions, where they discussed how to partner together in strategic ways to strengthen the Denver community.

This event was the first in a series of Business and Community Partnerships Summits led by Commerce’s Center for Faith-based and Neighborhood Partnerships. Future Summit locations and dates are set to be announced by the end of summer 2014.

Joshua Dickson is the Director of the Center for Faith-based and Neighborhood Partnerships at the U.S. Department of Commerce.