July 7, 2014 at 1:40 PM ET by Secretary Thomas E. Perez
Twitter Facebook Email
Summary:
Congress is back in session, and if members have been listening to their constituents they will move quickly to raise the federal minimum wage, which has lost 20 percent of its purchasing power since the 1980s. But absent action from Capitol Hill, states are taking up the slack.

Ed. note: This is cross-posted on the U.S. Department of Labor Blog. See the original post here.

Congress is back in session this week, and if members have been listening to their constituents they will move quickly to raise the federal minimum wage, which has lost 20 percent of its purchasing power since the 1980s. But absent action from Capitol Hill, states are taking up the slack.

In March, President Obama and I visited Central Connecticut State University with four New England governors who are leading the charge to reward hard work with a fair wage. Three weeks after our visit, Gov. Dannel Malloy of Connecticut signed a bill raising Connecticut’s minimum wage. And in the last month alone, Govs. Peter Shumlin of Vermont, Deval Patrick of Massachusetts and − as recently as last Wednesday − Lincoln Chafee of Rhode Island have followed suit. 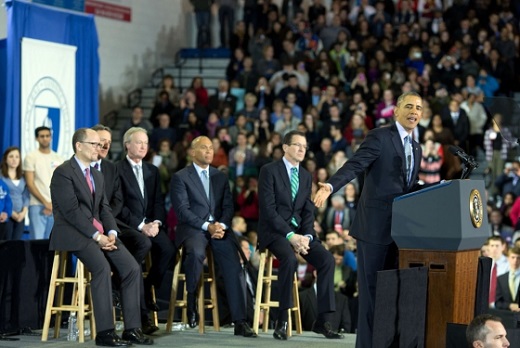 These state leaders are answering the call of low-wage workers who want nothing more than the dignity of being able to support their families, men and women who have to make heartbreaking decisions every day about which bill to pay or which meal to skip. These governors and their legislatures are also listening to employers who understand that paying higher wages is a sound bottom-line investment, leading to more consumer spending, which helps businesses to compete and the economy to grow.

The four New England states join nine others (plus the District of Columbia) that have raised their wage floor since the beginning of 2013. Twenty-two states and D.C. now have minimum wages higher than the federal level of $7.25 per hour. And President Obama has taken executive action to increase the minimum wage for private sector workers on federal construction and service contracts.

Hopefully, members of Congress are watching. They have it in their power to lift 2 million people out of poverty by passing legislation that will increase the minimum wage nationwide to $10.10 per hour. The time for this step is long overdue. Too many people are working harder but falling further behind, forced to subsist on food stamps and other forms of public assistance, desperately trying to build a better life for themselves and their families.

It’s time to follow the example of so many states and give our workers the raise they deserve.