President Obama Speaks on the Economy in Denver

July 9, 2014 at 7:30 PM ET by David Hudson
Twitter Facebook Email
Summary:
On a beautiful Wednesday afternoon in Denver, President Obama talks about the economy, the progress that his Administration has made, and how Republican obstructionism is making it more difficult to help Americans achieve their full potential.

On a beautiful Wednesday afternoon in Denver's Cheesman Park, President Obama delivered remarks about the economy, the progress that his Administration has made, and how Republican obstructionism is making it more difficult for Americans achieve their full potential.

The President opened his remarks poking fun at Colorado Governor John Hickenlooper over their pool game from last night at the Wynkoop Brewing Company.

"You should not ask him who won," the President joked. "No, no, really, don't ask Governor Hickenlooper who won at pool."

The President then quickly got down to business, telling the audience exactly what he was there to talk about:

Every day, we get thousands of letters and emails at the White House. I think it's something like 40,000 a day of some sort of correspondence. And every night, our Correspondence Office selects 10 letters for me to read. And I've been doing that since I first came into office. And it's one of the most important things I do -- it's right there next to my national security briefing and whatever policy issues that we're supposed to be working on -- because it reminds me of why I ran for office.

Alex, the young lady who introduced the President and ate pizza with him the night before, was one of those who wrote to the White House, noting that her boss gave her a raise to $10.10 an hour after watching this year's State of the Union address.

And the President talked about the four other Coloradans who wrote him and who he sat down for dinner with him last night.

I’m here because of Elizabeth, and Alex, and Carolyn, and Leslie. And I’m here for every American who works their tail off and does everything right and who believes in the American Dream -- and asks for nothing but a chance at a decent life for themselves and their families. That's why I'm here. And to tell all of you that I hear you. 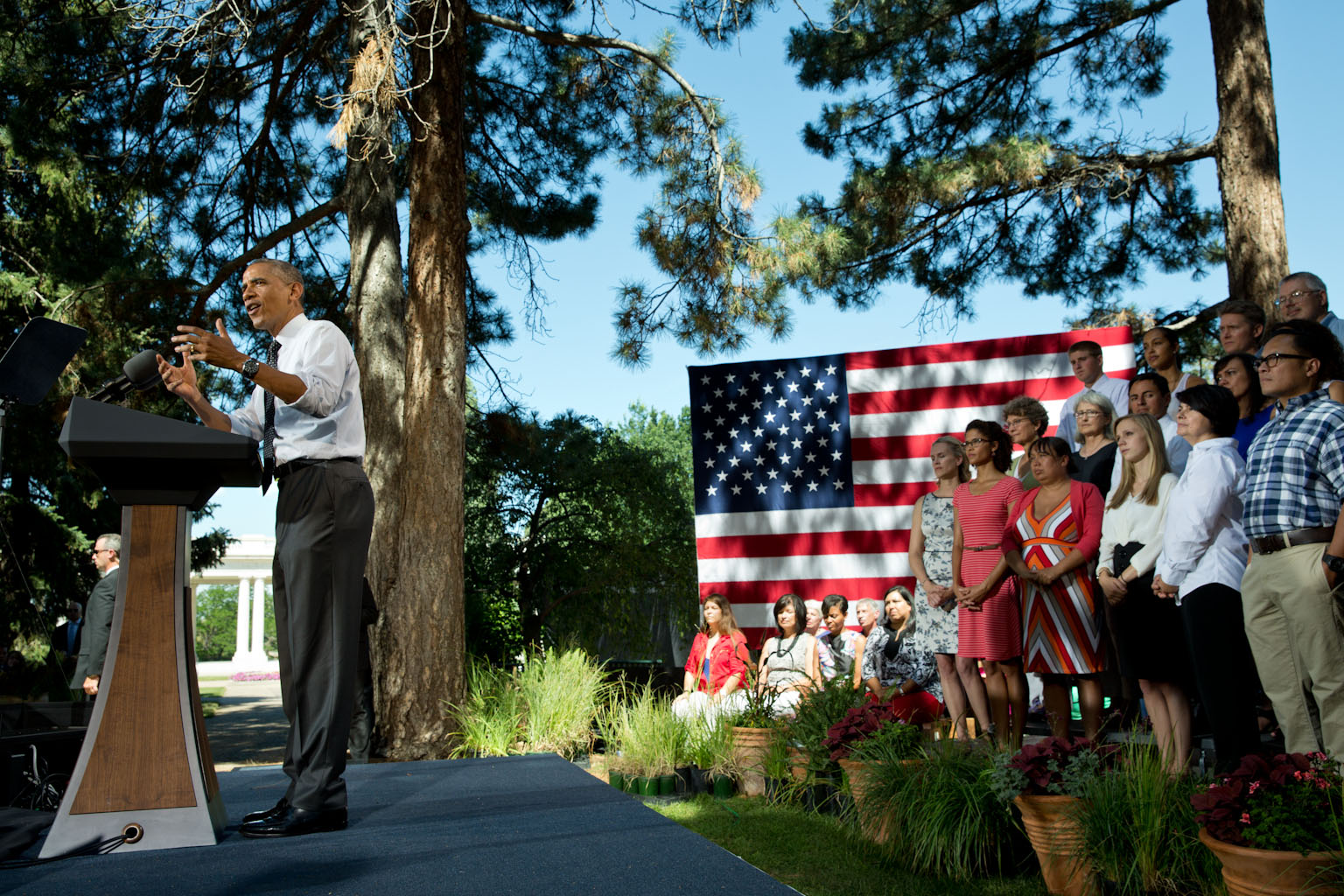 The President is also going around the country to stress to everyday Americans that as a country we're making progress.

Today, our businesses have added nearly 10 million new jobs over the past 52 months. Construction and housing are rebounding. Our auto industry is booming. Manufacturing is adding jobs for the first time since the ‘90s. The unemployment rate has fallen to its lowest point since September of 2008 -- the fastest one-year drop in nearly 30 years.

We've reduced our carbon emissions more than any other country over the past five years, our high school graduation rate is at a record high, we've cut our deficit by more than half, we've created more jobs in the first half of this year than we have since the '90s, and millions more Americans have health care today than did a couple years ago.

"We have come farther and recovered faster than almost any other advanced nation on Earth."

Today, we are better off by almost every economic measure than we were when President Obama took office. But the President reiterated that there's still work to do.

"But here’s the thing -- and this is why I’ve got to get out more and have lunch with -- and pizza with my friends -- because the fact is, we know we’ve still got a long way to go."

And that's why the President is heading to cities and towns across the country to continue to fight for folks that work hard to provide a better future for themselves and their families. He's fighting to provide a world-class education to every child, higher wages so people can live and save for retirement, workplace flexibility for families -- an opportunity agenda that enables every American the ability to get ahead if they work hard.

We’re fighting for the idea that everybody gets opportunity -- no matter what you look like, or where you come from, or who you love, or how you grew up, or what your last name is. America is a place where you should be able to make it if you try.

But the President reminded the audience of the reason why we haven't made more progress: "So far this year, Republicans in Congress have blocked or voted down every serious idea to strengthen the middle class."

They’ve said no to raising the minimum wage. They said no to fair pay legislation so that women are getting paid the same as men for doing the same work. They said no to unemployment insurance for Americans who are out there looking for a new job. I know, because I get letters from them every day -- folks who have worked all their lives, paid taxes all their lives. And now, right when they’re having a tough time because of an unprecedented recession that we just went through, and they need a little help so they don’t lose their house or they don’t lose their car, suddenly Congress can’t do it.

Congress just said no to fixing our broken immigration system in a way that strengthens our borders and our businesses -- despite the fact that everybody from law enforcement to corporations to evangelicals -- there’s a coalition around immigration reform that’s unprecedented. These guys still can’t get their act together.

So where Congress continues to do nothing, the President is going to continue to take action on his own, where he can. Already, as part of his Year of Action, the President has taken more than 40 actions, including: helping more students manage their student loan debt, raising the minimum wage for federal workers, ensuring equal pay for women, and investing in high-tech manufacturing. 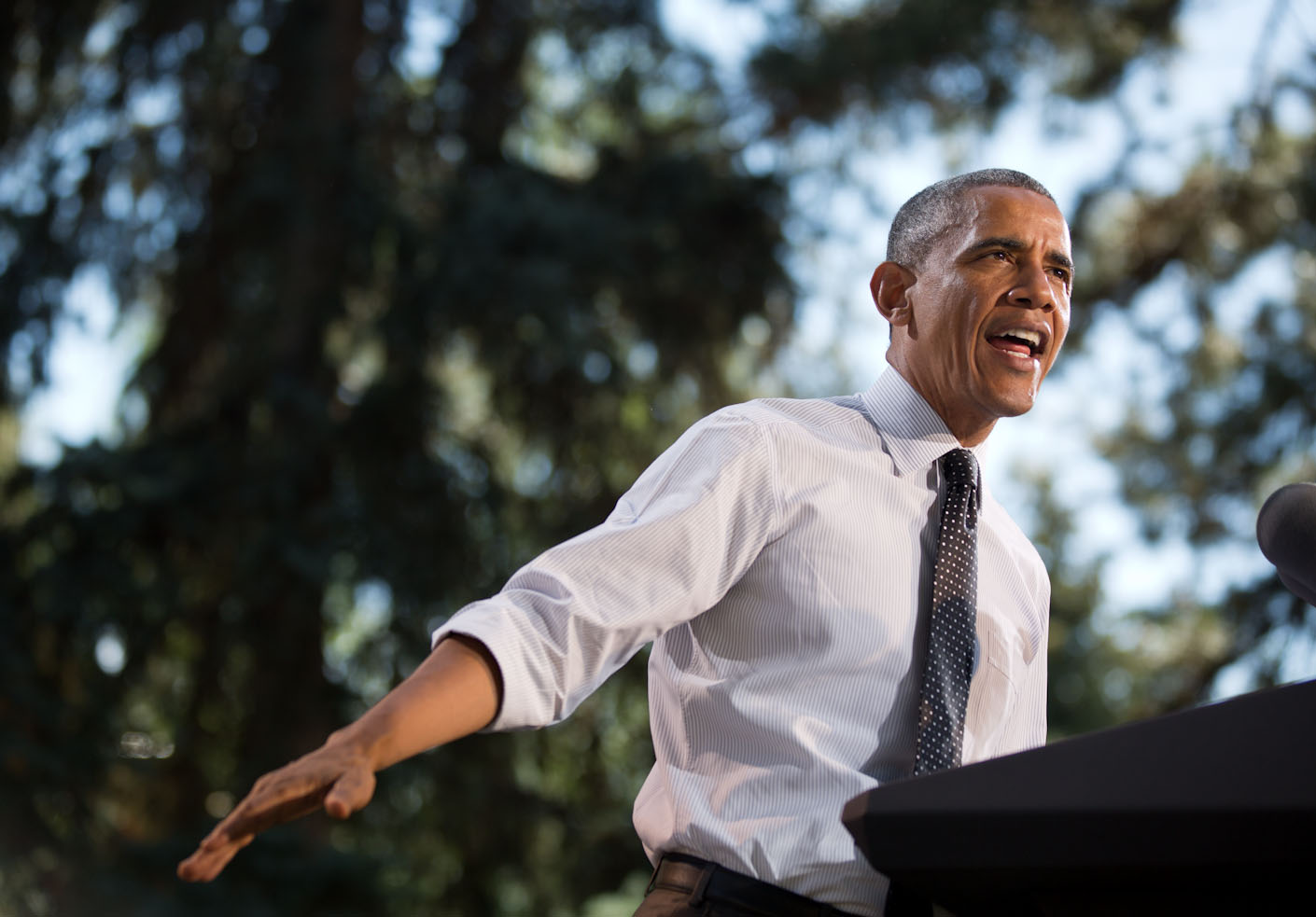 And the President made it clear that he remains more than willing to work with Republicans in Congress to get things done together.

"I have a better idea. They should do something. I will work with them. Rather than engage in political stunts that waste time and taxpayer money, join me. Let's do some things together."

And he told people not to get cynical: that even when it seems like Washington isn't working for them and obstructionism is the flavor of the month, this country is still making meaningful progress.

The President closed his remarks by reminding people that despite the cynicism and obstructionism, he's going to continue to spend every day fighting to restore the American Dream for everybody:

Every day I receive these thousands of acts of hope from you. I’m listening. It’s why I ran for office. It’s why I’m fighting for you. I will keep treating your cares and concerns as my own. I will keep trying to restore the American Dream for everybody who is willing to work for it.