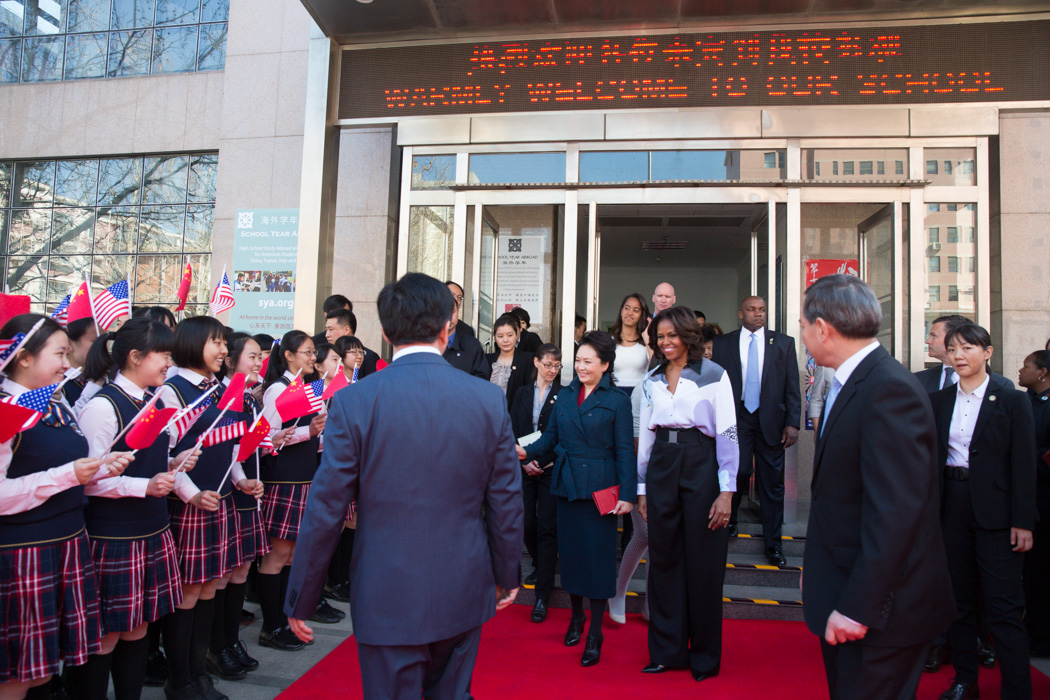 First Lady Michelle Obama and Madam Peng are greeted by a group of students as they leave the Beijing Normal School in Beijing, China, March 21, 2014. (Official White House Photo by Amanda Lucidon)

This March, First Lady Michelle Obama traveled to China with her mother and her daughters, Malia and Sasha Obama. Mrs. Obama’s trip to China underscored the mutual emphasis placed on education by the U.S. and China and the importance of cultural exchanges between each nation’s youth. While there, the First Lady met with students from both countries and explained that the defining challenges of our time - from climate change to economic opportunity – are shared challenges that the next generation will need to solve by working together across borders.

This week, the U.S. and China held meetings for the sixth round of the Strategic and Economic Dialogue (S&ED), and the fifth annual Consultation on People-to-People Exchange (CPE) in Beijing. The S&ED, which was co-led by Secretary of State John Kerry and Treasury Secretary Jacob J. Lew, focused on addressing shared strategic and economic challenges and opportunities. The CPE, which was led by Secretary Kerry, focused on strengthening ties between the two peoples through cultural, scientific, educational, and technological exchange. The First Lady delivered a message to the CPE, which was read by her Chief of Staff Tina Tchen, who is serving as the Women’s Pillar Lead for the U.S.-China People-to-People Exchange.

You can read the full message from First Lady Michelle Obama here and below:

Good Morning.  I am pleased to send my warmest greetings to all those gathered at the opening of the fifth round of the United States-China Consultation on People-to-People Exchange (CPE) in Beijing, China.  I would like to send my thanks to President Xi Jinping, Vice Premier Liu Yandong, and the entire Chinese delegation for hosting the United States’ delegation this year.

I would also like to take this opportunity to personally thank President Xi, Madame Peng, and the Chinese people for their gracious hospitality during my recent visit to China.  In conversations with Madame Peng – as well as with students, teachers and others from across China – I gained a deep appreciation for the shared aspirations of people in both of our countries.  I saw firsthand the importance of continuing to strengthen the bonds between our peoples – the foundation upon which the U.S.-China relationship is built.

Over the past five years, we have collaborated on a number of important initiatives.  Through the CPE, our two countries have encouraged Chinese and American women to enter science, technology, engineering, and mathematics careers through the Young Scientist Forum.  The Fulbright program and other educational opportunities have helped foster the highest numbers of exchange students and scholars in the history of both our countries.  The NBA Yao School opened in February in Beijing to promote youth development on and off basketball courts, and the NBA will also lead a youth-exchange at the 2014 World Youth Olympic Games in August.  The U.S. Olympic Committee, U.S. Paralympic Committee and the Special Olympics have continued to forge relationships with their Chinese counterparts to promote access to every level of sport for all people.

By strengthening the bonds between our two nations, you all are playing a critical role in building our relationship for future generations.  I wish you every success in these efforts, and I hope you have a productive and enjoyable event.