The President Discusses the Humanitarian Situation at the Southwest Border

After meeting with local officials, faith leaders, and Texas Gov. Rick Perry, President Obama delivered a statement yesterday evening on the humanitarian situation at the border.

He first described two of the crucial components of this ongoing crisis. First, the surge of unaccompanied children, and children with adults, is occurring in one concentrated sector at the border -- the Rio Grande Valley. Second, many of these children and their parents are not looking to evade law enforcement; rather, they are being apprehended in large numbers.

In his remarks, the President reiterated the steps that his Administration is taking to ensure that sufficient resources are being provided to this region of the border:

Right now, there are more Border Patrol agents and surveillance resources on the ground than at any time in our history. And we deport almost 400,000 migrants each year. But as soon as it became clear that this year’s migration to the border was different than in past years, I directed FEMA to coordinate our response at the border. Members of my Cabinet and my staff have made multiple trips to facilities there. And we’re also addressing the root of the problem. I sent Vice President Biden and Secretary Kerry and Secretary Johnson to meet with Central American leaders, as well as working with our international partners to go after smugglers who are putting their kids’ lives at risk.

On Tuesday, the President sent a letter to Congress asking them to commit $3.7 billion to "comprehensively address this urgent humanitarian situation."

"About half of the resources would go to border security, enforcement, and expedited removal of people who don’t qualify for a humanitarian claim," the President said. "About half would go to make sure we’re treating children humanely. We’d also make investments to further tackle the root problems in Central America."

President Obama reminded the audience that the Senate passed a bipartisan immigration bill over a year ago that could have prevented this situation:

"It would have put us in a stronger position to deal with this surge and, in fact, prevent it."

The President also addressed his meeting with Governor Perry and other local officials, calling the meeting "constructive" and detailing the governor's ongoing concerns. 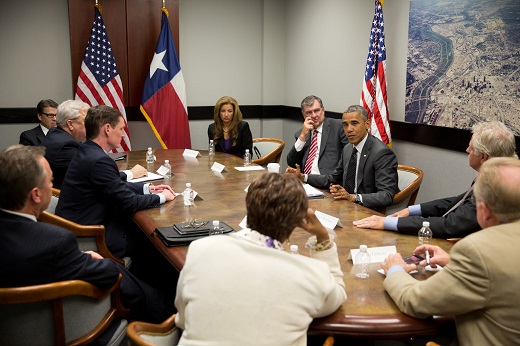 President Barack Obama chairs a meeting with Texas officials in Dallas on the unaccompanied minors trying to cross the border from Central American countries into the U.S. July 9, 2014. (Official White House Photo by Pete Souza)

In the meeting, Governor Perry expressed four areas of concern: the number of Border Patrol agents directly on the border; positioning some agents too far from the border to be effective; the lengthy process for children coming from countries other than Mexico; and the length of administrative processing within the immigration judicial system.

The President emphasized that many of these concerns could be dealt with if Congress passed the supplemental in an expeditious manner -- and he urged Governor Perry to talk with the Texas delegation to vote in favor of the supplemental to give the federal government the resources to deal with this problem.

President Obama closed his remarks by thanking local officials and faith-based groups that he met with, who have been incredibly compassionate in looking at facilities that could accommodate some of these children. Other organizations have provided care and assistance to children in need.

"I told them thank you, because it confirmed what I think we all know, which is the American people are an incredibly compassionate people and when we see a child in need we want to care for them." 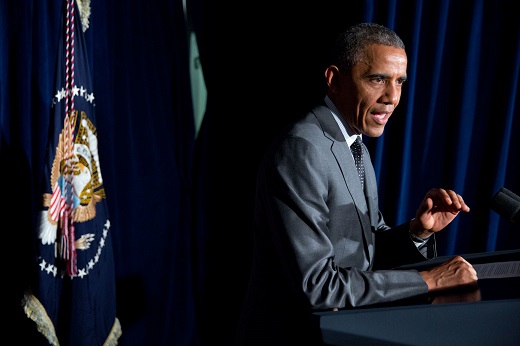 President Barack Obama makes a statement after meeting with Texas Gov. Rick Perry and with Texas officials in Dallas on the unaccompanied minors trying to cross the border from Central American countries into the U.S. July 9, 2014. (Official White House Photo by Pete Souza)