July 14, 2014 at 12:53 PM ET by Todd Larson
Twitter Facebook Email
Summary:
Reflecting on USAID's commitment to the human rights of lesbian, gay, bisexual and transgender (LGBT) folks around the world.

Ed. note: This blog is cross posted on the USAID Blog. See the original post here. 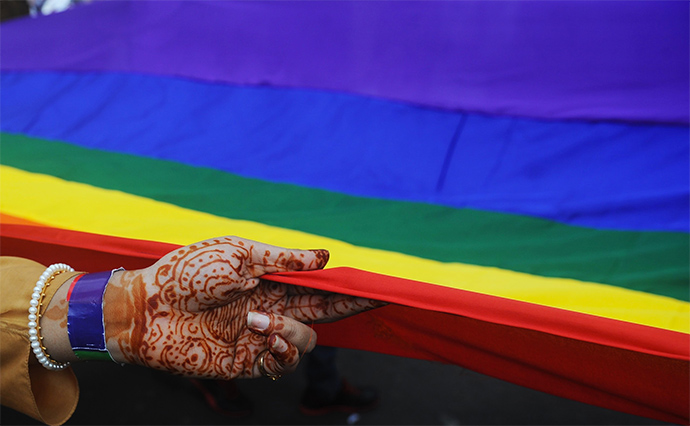 India: A gay rights activist holds a rainbow flag during a Rainbow Pride rally in Kolkata on July 15, 2012. More than 500 people from the lesbian, gay, bisexual and transgender communities and supporters participated in the annual event to show solidarity and to create awareness about their basic rights. June 15, 2014. (by Dibyangshu Sarkar)

With June’s Pride month celebrations behind us, I reflect on the reasons I celebrated.

Reverberations continue from President Obama’s ground-breaking Memorandum of December 2011, which outlined the U.S. Government’s commitment to the human rights of lesbian, gay, bisexual and transgender (LGBT) folks around the world. USAID continues to take a lead among foreign affairs agencies in fulfilling the tenets of the Presidential Memorandum, recently issuing its own document: USAID LGBT Vision for Action.

USAID’s vision is a world in which the basic and universal human rights of LGBT persons are respected and they are able to live with dignity, free from discrimination, persecution and violence. In this world, LGBT persons are able to participate fully in democratic decision-making in their households, communities and countries; have equal access to sustainable livelihoods, economic assets and resources; are not barred from accessing the basic education, health and other services that are enjoyed by their fellow citizens and that are essential for personal well-being and growth.

In Colombia, for example, USAID has worked hard to build the skills of LGBT leaders so they can participate fully and effectively in democratic processes. We are supporting a project designed to extend democratic governance and respect for human rights to all Colombians, as well as mainstream LGBT and other vulnerable populations’ rights (e.g. through improving relations with law enforcement and pursuing legal cases to enforce human rights). Our Colombian civil society partners are developing advocacy and policy strategies, improving relations with law enforcement, pursuing legal cases to enforce human rights abuses, and raising awareness to institutionalize a culture of respect for LGBT rights. 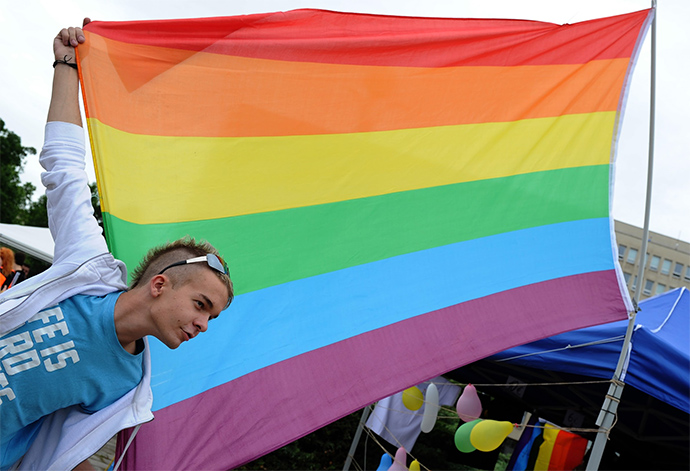 Slovakia: A demonstrator holds a rainbow flag in Bratislava on June 9, 2012, during the Rainbow Pride Parade, a march for the human rights of non-heterosexual people and the celebration of LGBT (lesbian, gay, bisexual, transgender) pride in Slovakia. June 9, 2014. (by Samuel Kubani)

The first Pride celebration I attended, decades ago, was small, apologetic and attended by only a furtive few. My calendar this past June couldn’t possibly have accommodated all the events hosted by the White House and federal agencies across Washington, D.C., let alone the numerous events hosted by USAID missions across the more than 80 countries in which we work. Near the end of June, I co-moderated a session at the first ever White House Forum on Global LGBT Human Rights.

When I first engaged as an American in the struggle for the human rights of LGBT folks around the world, it was often difficult to identify local LGBT representatives with whom to interface. Today they have bravely and proudly organized in most countries. They guide us, and trust us to join forces with them, shoulder to shoulder, as they live and breathe and move their cultures and countries toward realization of the Martin Luther King Jr. teaching: “The arc of the moral universe is long, but it bends towards justice.” 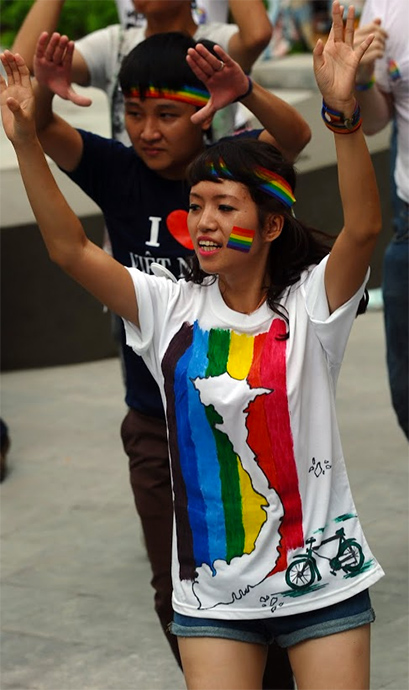 Vietnam: A participant dances during a flashmob organised by the local LGBT community in Hanoi on September 23, 2012. Two first ever flashmobs by LGBT communities were held at the same time in both Hanoi and Ho Chi Minh City, Vietnam’s two largest cities. September 23, 2013. (by Dinh Nam)

Soon after arriving at USAID, four months ago, I travelled to Uganda to meet with some of these brave, proud individuals. I came away not only bowed by the enormity of their challenges and the urgency and critical importance of supporting them, but also – by virtue, above all, of their brilliance and tenacity – convinced of the inevitability of their success.

While many of us celebrated this June openly and joyously, others of us were forced to do so behind closed doors, shielding ourselves from hostile environments. In some 80 countries around the world, same-gender consensual relations are criminalized; in a half dozen countries, same-gender consensual relations are punishable by death. In countries like Uganda, Nigeria and Russia, this past year saw backsliding of enormous and tragic proportions.

To say that there is a lot of work ahead is to state the obvious. At the same time, more than ever before in my lifetime, I understood and joined in the celebrations of Pride month 2014.  I look forward to Pride month 2015, and celebrating the further achievements of our global community.