Preparing Communities for the Impacts of Climate Change

July 16, 2014 at 5:12 PM ET by David Hudson
Twitter Facebook Email
Summary:
A world-class infrastructure system is a vital part of a top-performing economy. But there's another important reason why we need to rebuild our infrastructure: climate change. 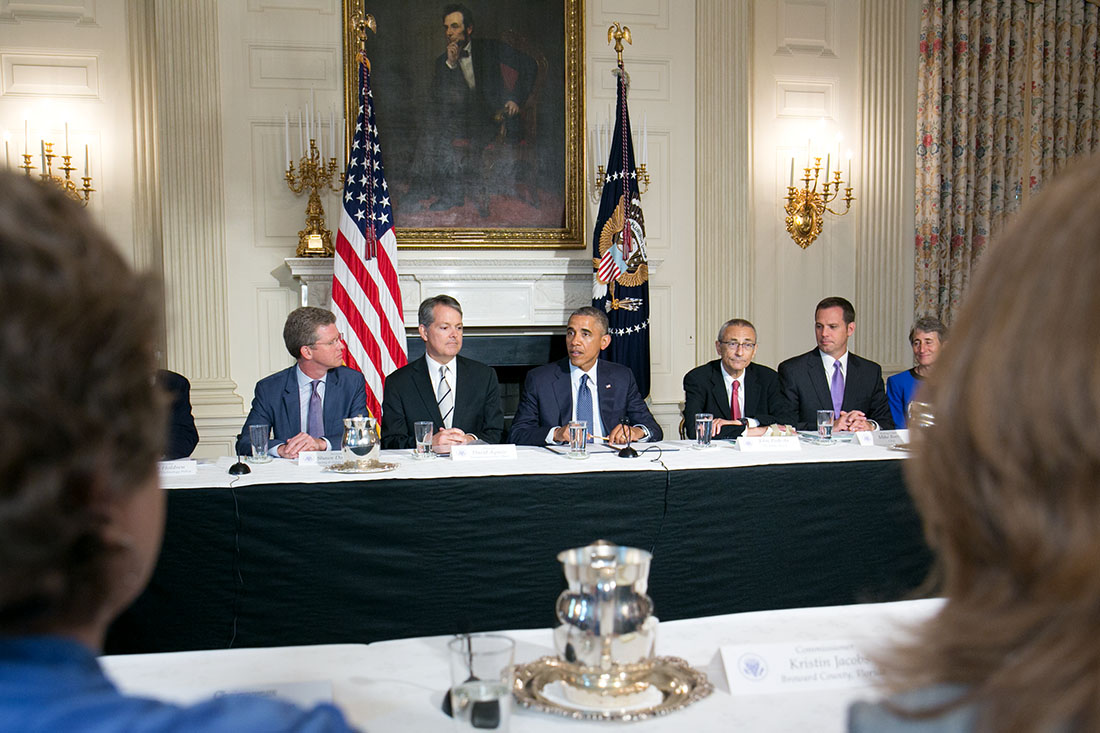 President Barack Obama drops by a meeting of the Task Force on Climate Preparedness and Resilience, in the State Dining Room of the White House, July 16, 2014. (Official White House Photo by Amanda Lucidon)

We've been talking a lot recently about the need to rebuild and strengthen our nation's infrastructure. As the President has made clear, a world-class infrastructure system is a vital part of a top-performing economy.

But there's another important reason why we need to rebuild our infrastructure: climate change.

Communities across America need more resilient infrastructure that can withstand the impacts of climate change -- like more extreme weather and increased flooding. That's part of the reason why the President established the State, Local, and Tribal Leaders Task Force on Climate Preparedness and Resilience last November.

The Task Force, made up of 26 governors, mayors, and county and tribal officials from across the country, advises the President on how the federal government can best help American communities dealing with the effects of climate change. Today, the Task Force came to the White House for their fourth and final meeting, and will give the President final recommendations this fall.

"These leaders are here because states and communities that they represent are already dealing with the effects of climate change," the President said at today's meeting. "They’re seeing rising sea levels, more powerful hurricanes, more intense heatwaves, severe droughts, and wildfires out west. So this is already happening, and these leaders understand that climate change is a threat to public safety, it’s a threat to public health, and to something that we want to emphasize today -- the infrastructure upon which our economy depends."

During his remarks, the President also announced a series of actions in response to early feedback from the Task Force. These actions will help state, local, and tribal leaders prepare their communities for climate change by building more resilient infrastructure and rebuilding existing infrastructure in a stronger and smarter way.

We’re going to do more, including new data and 3D maps to help state, local officials in communities understand which areas and which infrastructure are at risk as a consequence of climate change.  We’re going to help communities improve their electric grids, build stronger seawalls and natural barriers, and protect their water supplies.  We’re also going to invest in stronger and more resilient infrastructure.

Last month, I announced a new competitive fund -- $1 billion -- to help communities do this.  Today we’re taking steps to make sure that this competition will work.  We’re going to announce the specifics about who can compete, how we can learn from communities that are rebuilding stronger from disasters like Hurricane Sandy and flooding in Colorado.  We want the best ideas to become models for the whole country.  And the idea of this competition is not just the communities that win a grant are able to improve their infrastructure but what we’re also going to be doing is hopefully lifting everybody’s game and making sure that people in their planning are thinking about these issues as they move forward.

"The bottom line is investing in our infrastructure, protecting our communities, ensuring the health and safety of our citizens."

He reiterated that this shouldn't be a partisan issue, as it's something that Democrats, Republicans, and independents all care about.

"I want you to know that you have a partner in me," the President said. "You have a partner in this administration, and I'm confident that, working together, we can take some common-sense steps to make sure that America’s infrastructure is safer, stronger and more resilient for future generations."

Find out more about the series of actions the President announced this afternoon, and watch the President's full remarks below: