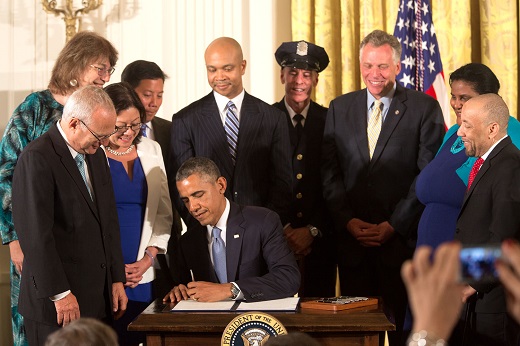 Earlier today, President Obama signed an Executive Order that prohibits federal contractors from discriminating on the basis of sexual orientation or gender identity. The Order also ensures that federal employees – who are already protected on the basis of sexual orientation – will now formally be protected from discrimination based on gender identity as well.

In response to the President's actions today, many national organizations dedicated to LGBT equality, civil rights, and religious freedom expressed their support.

This is one of the most important actions ever taken by a president to eradicate LGBT discrimination from America's workplaces. By signing this order, President Obama is building on a bipartisan tradition, dating back over 70 years, of barring discrimination without exception when taxpayer dollars are involved.

For nearly 50 years it has been illegal for federal contractors to discriminate in employment decisions on the basis of race, color, religion, sex, or national origin. This action by President Obama continues his historic leadership in promoting LGBT rights and equality and moves our nation closer to full equality in the workplace.

We’re very pleased that the President has issued such a strong directive to all government contractors, with no religious exemption—it’s a clear message that America does not tolerate bigotry. We’re proud to contribute to the ongoing effort to make the American workplace more inclusive.

Christopher Hale, Catholics in Alliance for the Common Good:

Since our nation's founding, American Catholic organizations have responded to the Gospel of Jesus Christ by serving every person in need. And with today's order, we pray the Church can continue that great tradition while ensuring that our own institutions are welcoming to all who are willing to serve.

The executive order ensures that 28 million hardworking Americans have the protections they need to provide for their families and can go to work without the threat of losing their jobs simply because of who they are or whom they love. While there is still work to be done, this is a watershed moment in our country’s march toward basic fairness, and President Obama has continued to secure his legacy as a champion for equal rights for all Americans.

Today our nation is taking another important step towards creating a more perfect union. President Obama’s action today is another historic milestone as we create a more just and equal workplace for all. Now Congress must act to ensure all Americans are protected and treated equally.

For the first time in our nation’s history, all hardworking LGBT employees of the federal government and federal contractors are protected from discrimination. Because of these historic executive orders, LGBT workers will be judged on their qualifications, experience, and performance – nothing more, and nothing less. This monumental step forward is yet another testament to President Obama’s commitment to treating all people fairly and equally.

At the foundation of every happy, healthy family is economic security – the ability to earn a living and the economic stability to provide for a dependent partner and children. Through this executive order, the President ensures protections for many of the LGBTQ families we serve so that they may better provide security and stability for their loved ones.

LGBT individuals should not be discriminated against in the workplace based on their sexual orientation or gender identity. Young LGBT individuals in particular stand to benefit from workplace discrimination protections, as we called for in a recent report. Everyone has a right to earn a living, and workers should be judged on the quality of their work.

With this action, President Obama has cemented his legacy as a transformative leader. Consistently, this administration has taken unprecedented and historic executive actions to advance LGBT equality in this country and around the world.

The president’s decision to bar discrimination by federal contractors on the basis of sexual orientation and gender identity demonstrates his compassion for those Americans who fear discrimination; his decision not to include a new religious exemption is a testament to his understanding of religious freedom. We cannot secure the separation of church and state if religious organizations are allowed to use federal money to pursue a sectarian agenda. This executive order is an important step toward ensuring that public money does not fund religiously motivated discrimination.

With today’s executive order, President Obama has aligned the interests of American taxpayers with industry standards well established by America’s business leaders. The American public deserves good value when spending public dollars to meet public needs. Discrimination is hurtful and wasteful. American workers and the American public need both value and fairness when public funds are expended. We thank and applaud President Obama and his administration for taking this important step.

MCC stands with all people of good will to support President Obama in this historic action. It is a deep honor to represent Metropolitan Community Churches at the signing event. While these executive orders will add sexual orientation and gender identity to the list of protected classes for federal contractors and workers, we will not rest until Congress passes the Employment Non-Discrimination Act (ENDA) with no religious exemptions so all Americans will be hired and fired based on their work and integrity rather than their gender identity or whom they love.

President Obama’s decision to protect LGBT workers contracting with the federal government is a powerful sign that our nation continues to make progress on expanding equality and opportunity to all. But the fight on this issue is far from over.

For far too long, LGBT employees have been subject to open bigotry and negative job actions based on factors that have nothing to do with our ability to do the job. We are confident the President’s leadership on this issue will soon lead us to a day where all LGBT employees are protected from rank discrimination on the job.

With President Obama's signature today, millions of LGBT Americans now have explicit workplace protections that ensures they and their families aren't cut out of a job because of who they are.

Unfortunately, far too many states in this country do not have the types of protections in place that would prevent employers from firing a person simply because of his or her sexual orientation or gender identity. While the president’s action today is a critical step toward remedying this injustice, much more needs to be done. In order to ensure that all LGBT Americans are treated equally within the workplace, the House of Representatives must pass a long-overdue legislative solution that extends beyond federal contractors—the Employment Non-Discrimination Act.

This is the ultimate ‘pro-business’ decision the president can make. Access to work and economic advancement is a basic and fundamental principle of what makes the U.S. economy strong and resilient. With today’s executive order, President Obama has greatly added to his outstanding legacy to making America stronger for all.

This decision is good for LGBT people, good for our economy and good for America. It also speaks volumes about President Obama's resolve to end discrimination in all its guises. Millions more LGBT workers and their families will have the employment protections and economic security they need and deserve.

Today, I am more hopeful than ever that fairness can win over discrimination, but only if we continue to stand up and speak out, reaching our elected officials in their local communities, their statehouses, and on Capitol Hill about why discrimination is not an American value.

We commend President Obama for these important steps affirming that the government should not fund discrimination through its contracts. These orders represent a significant step in ensuring equal opportunity in the workplace. They expand the Administration's consistently robust efforts to protect the fundamental rights of LGBT people (as it has done through key steps such as its support for marriage equality and the repeal of Don't Ask Don't Tell and the Defense of Marriage Act).

What President Obama has recognized is that the call to government service is not limited by sexual orientation or gender identity. He has courageously expanded the opportunities for service to all who hear that call and in doing so has affirmed the highest values of our country and our diverse faiths.

This executive order provides much needed clarity to federal contractors and agencies. President Obama today sent a clear message to employers that receive federal money that it is unacceptable for them to discriminate because of who someone is or who they love.

Transgender people face enormous obstacles to finding and keeping jobs. They report unemployment at twice the rate of the population as a whole. And they are nearly four times more likely than the population as a whole to have a household income of less than $10,000. These statistics are troubling. Our nation needs a comprehensive federal law to protect [LGBT] workers. The President’s action today is an enormous step forward in realizing that goal.

The executive order will help reduce the number of American workers who can be harassed or fired based on their actual or perceived sexual orientation and gender identity. Williams Institute research has documented pervasive and persistent patterns of workplace discrimination in all fifty states, however, our analysis indicates that state and local nondiscrimination laws protect only a portion of the American workforce.