President Obama in L.A.: "You Are Why I Ran for President in the First Place"

This afternoon, President Obama addressed an excited and energized crowd under sunny skies at the Los Angeles Trade-Technical College.

In his remarks, the President said that he was excited to be back in L.A., where he spent a few "good years" in college -- and quickly explained what he was there to talk about.

I’m listening to Americans all across the country, everybody who works their tail off, is doing the right thing, who believes in the American Dream, just wants a chance to build a decent life for themselves and their family. You are why I ran for President in the first place.

And we've made a lot of progress since the President took office. Months before the President was sworn into office, the economy tanked, millions of Americans lost their jobs, some of them lost their homes, and almost everyone suddenly was much less certain about America's future.

But we've bounced back.

Today, our businesses have added nearly 10 million new jobs over the past 52 months. The unemployment rate is at its lowest point since September of 2008. And this past year, we saw one of the fastest drops in nearly 30 years in the unemployment rate. The decisions we made not only to rescue the economy, rescue the auto industry, but to rebuild it on a new foundation -- those decisions are paying off.

We're more energy independent. We're the world's number-one oil and gas producer. We've done more to reduce our carbon footprint than any other country over the past eight years. Our high school graduation rate is at a record high. More young people are going to college than ever before. And millions more Americans now have quality, affordable health care. 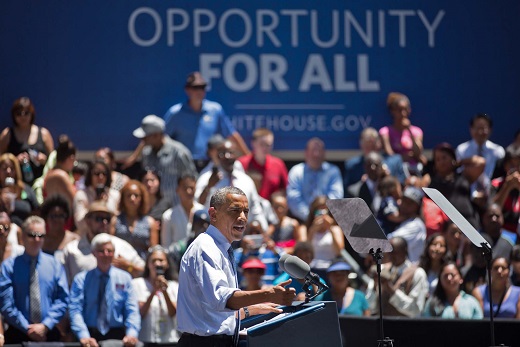 "None of this was an accident," the President declared. "It’s thanks to your resilience and resolve that America has recovered faster and come farther than almost any other advanced country on Earth."

"We've recovered faster, we've gone farther than almost any country on Earth since the economic crisis."

The President also visited Los Angeles Trade-Technical College to focus on one thing in particular: training more Americans for the types of jobs that we're creating in the 21st century.

Right now, there are more job openings in America than any time since 2007. That doesn’t always make headlines, it's not sexy so the news doesn’t report it, but it’s a big deal. And the job training programs can help folks who fell on hard times in the recession, help them find a solid path back to the middle class.

"Americans are the best workers in the world -- if we're given a chance," the President said. He then called on all of us to work together to help more Americans to learn the skills that the 21st-century economy needs.

Earlier this week, President Obama signed into law the Workforce Innovation and Opportunity Act (WIOA), which makes our federal training program more geared toward high-quality jobs that are in demand today. The President stressed that we should be doing things like this more often -- that Congress should be taking efforts to strengthen the middle class and help create more opportunities for all Americans.

But there's one specific issue where the President suggested Democrats and Republicans could come together -- a type of corporate tax loophole called an "inversion."

"Even as corporate profits are higher than ever," the President said, "there’s a small but growing group of big corporations that are fleeing the country to get out of paying taxes." 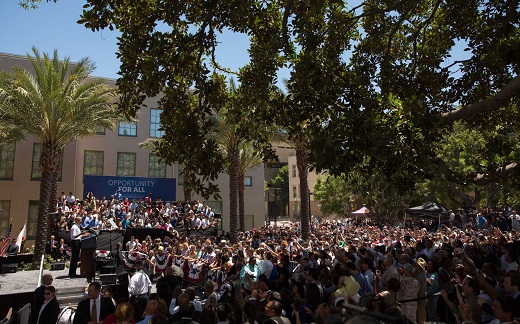 Corporations don't want to give up the perks of doing business in the United States -- the best universities, a strong economy, the best military -- they're just not trying to pay for those perks. "So they’re technically renouncing their U.S. citizenship," he said. "They’re declaring they’re based someplace else even though most of their operations are here."

It damages the country’s finances. It adds to the deficit. It makes it harder to invest in things like job training that help keep America growing. It sticks you with the tab to make up for what they’re stashing offshore through their evasive tax policies.

The President pointed out that a nurse or a construction worker or a teacher doesn't get to pick the tax rate that they have to pay -- so neither should these companies.

But the good news is that we're able to do something about this. In this year's budget, the President proposed closing these "unpatriotic tax loopholes for good."

"You shouldn’t get to call yourself an American company only when you want a handout from American taxpayers."

And the President stressed that has wasn't interested in punishing these companies for what they've done -- he's simply interested in an economic patriotism where everyone in this country contributes their fair share.

Instead of tax breaks for millionaires, let’s give tax breaks to families to help on child care or college. Let’s stop rewarding companies that ship jobs overseas; give tax breaks to companies that are bringing jobs back to the United States. Let’s put America back to work rebuilding roads and bridges and airports. Let’s make sure the next generation of good manufacturing is happening right here in Los Angeles, and in Wisconsin, and in Pittsburgh, Pennsylvania.

The President noted that the hardest thing to do in politics is to change the status quo. There's an entire industry in Washington that feeds off of people staying cynical.

Cynicism is fashionable these days. But I got to tell you, cynicism didn’t put a man on the moon. Cynicism did not create the opportunity for all our citizens to vote. Cynicism has never won a war, or cured a disease, or started a business, or fed young minds.

"Cynicism is a choice, and hope is a better choice," the President said. "And if we can work together, I promise you there's no holding America back."