Empowering Africa's Next Generation of Leaders

July 28, 2014 at 4:44 PM ET by Valerie Jarrett, Valerie B. Jarrett
Twitter Facebook Email
Summary:
The U.S.-Africa Leaders Summit represents the largest gathering any American president has ever hosted with African heads of state and government.

President Obama’s town hall today with 500 of Africa’s most promising young leaders provided an inspiring window into what the future holds for Africa, and the world.

The 500 participants in the Washington Fellowship program were selected from nearly 50,000 applicants from across Africa, as part of the President’s Young African Leaders Initiative (YALI). YALI was launched by President Obama in 2010, as part of a long-term investment in the next generation of African leaders. It aims to sharpen their skills, to improve their networks, and to strengthen partnerships between the United States and Africa for years to come.

The President announced during the town hall that the Washington Fellowship was being renamed as the Mandela Washington Fellowship for Young African Leaders, in honor of the former South African President, Nelson Mandela. Mandela Washington Fellows represent the best and brightest from communities across Africa, and fields ranging from education, medicine, law, business, and beyond. These are the young leaders whose skills, passion, and visions for the future, will help shape the fate of their countries and the world. It is in everyone’s best interest to help them prepare with the tools they need to build a healthier, more secure, more prosperous, and more peaceful Africa, which is why President Obama launched YALI in the first place.

President Obama also took today’s opportunity to preview another historic event planned for next week. The U.S.-Africa Leaders Summit will be hosted in Washington, by President Obama, and will represent the largest gathering any American president has ever hosted with African heads of state and government.

The President pointed out today, “even as we deal with crises and challenges in other parts of the world that often dominate the headlines; even as we acknowledge the real hardships that so many Africans face every day -- we have to make sure that we’re all seizing the extraordinary potential of today’s Africa, the youngest and fastest-growing continent.” 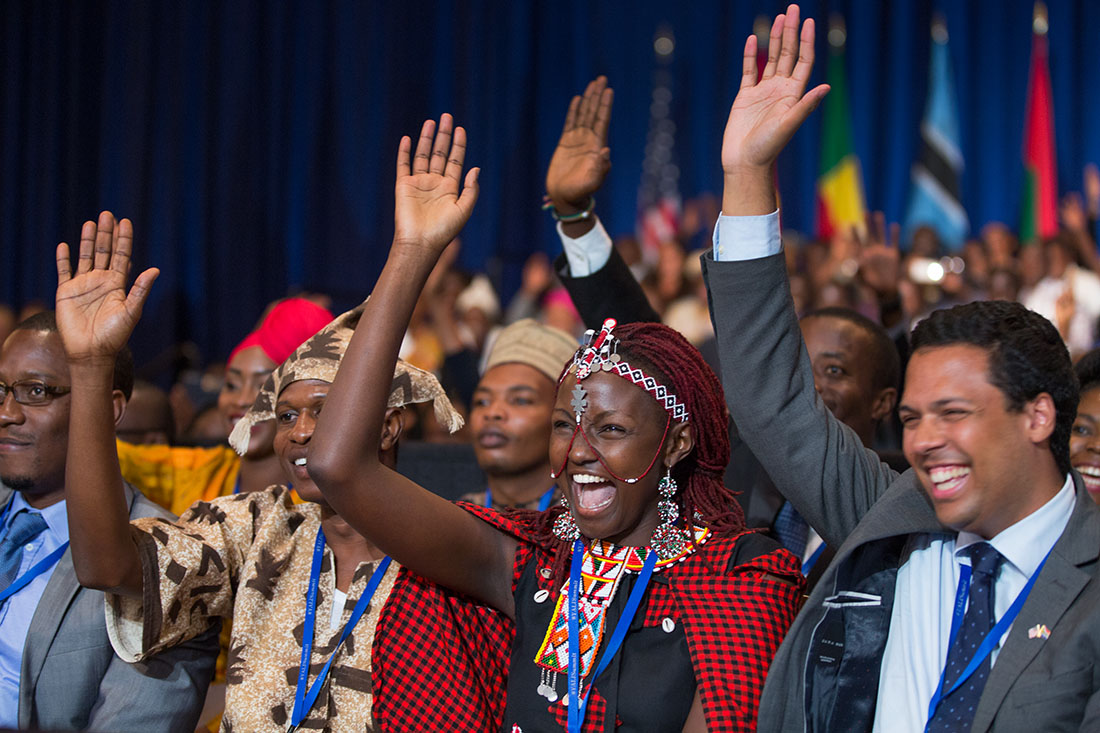 YALI is about capitalizing on the creativity and talent of Africa’s young leaders by empowering them with the skills, training, and technology necessary to make lasting change, and meaningful progress back home. And to do so, we are engaging public and private sector partners to create new Regional Leadership Centers across Africa to reach more young leaders.  We’re joining with American universities, African institutions and business partners like Microsoft and MasterCard Foundation. Starting next year, young Africans can come to these centers to network, access the latest technology, and get training in management and entrepreneurship. The first centers will be located in Senegal, Ghana, South Africa and Kenya --  and will provide tens of thousands of young Africans the resources they need to put their ideas into action.

As last year came to a close, the world said goodbye to one of the brightest lights the world has ever known -- President Nelson Mandela. His life was proof of the power within each of us to leave the world better than we found it. Yet, as that brilliant star dimmed, we now have the opportunity to see 500 more shine brightly this week.

One of this summer’s Fellows, Sobel Ngom from Senegal, captured the spirit of his experience in the YALI program this way: “Here, I have met Africa. The [Africa] I have always believed in. She is beautiful, young, full of talent, motivation and ambition.”  And being here with all of his Fellow Mandela Washington Fellows -- learning together, working together, dreaming together -- has only strengthened his determination, he says, to realize his aspirations for his country and his continent.

Watch the full video of the town hall below: