July 29, 2014 at 11:26 AM ET by Jason Furman, John Podesta
Twitter Facebook Email
Summary:
The Council of Economic Advisers released a report that examines the economic consequences of delaying implementing policies to reduce the pace and ultimate magnitude of these changes; the findings emphasize the need for policy action today.

The signs of climate change are all around us. The average temperature in the United States during the past decade was 0.8° Celsius (1.5° Fahrenheit) warmer than the 1901-1960 average, and the last decade was the warmest on record both in the United States and globally. Global sea levels are currently rising at approximately 1.25 inches per decade, and the rate of increase appears to be accelerating.

The scientific consensus is that these changes, and many others, are largely consequences of anthropogenic emissions of greenhouse gases that have led to a warming of the atmosphere and oceans.

The Council of Economic Advisers released a report today that examines the economic consequences of delaying implementing policies to reduce the pace and ultimate magnitude of these changes; the findings emphasize the need for policy action today. The report was written under the leadership of Jim Stock, who recently resigned as a Member of the Council of Economic Advisers to return to his teaching position at Harvard University.

1. Immediate action substantially reduces the cost of achieving climate targets. Taking meaningful steps now sends a signal to the market that reduces long-run costs of meeting the target. Such action will reduce investments in high-carbon infrastructure that is expensive to replace and will spur development of new low- and zero-emissions technologies. For both reasons, the least-cost mitigation path to achieve a given climate target typically starts with a relatively low price of carbon to send these signals to the market, and subsequently increases as new low-carbon technologies are developed and deployed. An analysis of research on the cost of delay for hitting a specified climate target suggests that net mitigation costs increase, on average, by approximately 40 percent for each decade of delay. 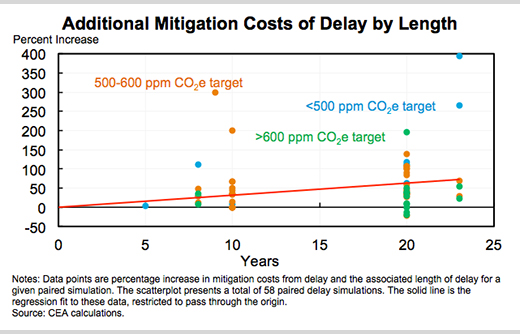 2. Climate change stemming from delayed action creates large estimated economic damages. If delayed action causes the mean global temperature increase to stabilize at 3° Celsius above preindustrial levels, instead of 2°, that delay will induce annual additional damages of 0.9 percent of global output. To put this percentage in perspective, 0.9 percent of estimated 2014 U.S. GDP is approximately $150 billion. The next degree increase, from 3° to 4°, would incur greater additional annual costs of 1.2 percent of global output. These costs are not one-time: they are incurred year after year because of the permanent damage caused by additional climate change resulting from the delay. 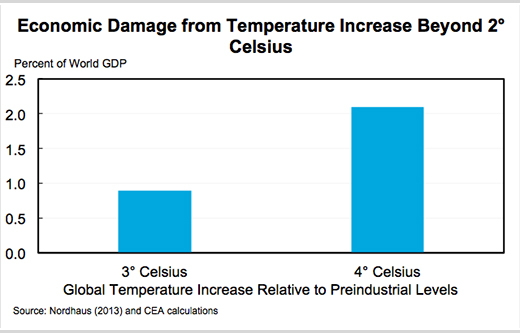 3. The possibility of abrupt, large-scale, catastrophic changes in our climate increases the need to act. These large-scale events include the melting of the West Antarctic ice sheets and other ice sheets – which would cause large degrees of sea level rise – as well as the release of additional methane through thawing of permafrost, which would accelerate global warming. These and other potential large-scale changes are irreversible on relevant time scales – if an ice sheet melts, it cannot be reconstituted on any societally relevant timescale – and they could potentially have massive global consequences and costs. For many of these events, there is thought to be a “tipping point,” for example a temperature threshold, beyond which the transition to the new state becomes inevitable, but the values or locations of these tipping points are typically unknown.

4. Enacting meaningful change in climate policy is analogous to purchasing climate insurance. Much like other insurance purchased by individuals and businesses, paying mitigation costs now reduces the odds of a large-scale catastrophic change in climate. And, unlike conventional insurance policies, climate policy that serves as climate insurance is an investment that also leads to cleaner air, energy security, and benefits that are difficult to monetize like biological diversity.