July 29, 2014 at 1:11 PM ET by Cameron Brenchley
Twitter Facebook Email
Summary:
Lucy Coffey, age 108, is the oldest living female World War II veteran, and received a warm welcome to the White House by President Obama and Vice President Biden during her visit to Washington, D.C. as part of the Honor Flight Network. 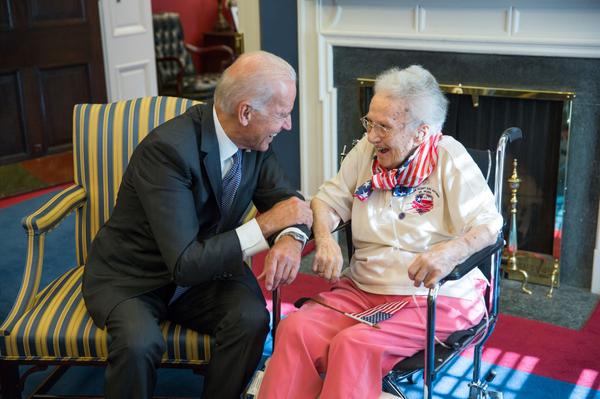 When her country called during World War II, Lucy Coffey answered. Three months after her 37th birthday, Coffey quit her job at the local A&P grocery store and enlisted in the Women’s Army Auxiliary Corps (WAAC). Today, at age 108, Coffey is the oldest living female World War II veteran, and last week she received a warm welcome to the White House by President Obama and Vice President Biden during her visit to Washington, D.C. as part of the Honor Flight Network.

Coffey was one of 400,000 American women who served in uniform during World War II, and during the war, she travelled through Australia, New Guinea, the Philippines, and eventually landed in Japan where she served as an account-statistician in the procurement office. During her WWII service, Coffey rose to the rank of sergeant and served in the Battle of Luzon, earning the Philippine Liberation Ribbon with a bronze star. She also earned an Asiatic Pacific Theatre Ribbon with one bronze star, a World War II Victory Medal, the WAC Service Medal, and a Good Conduct Medal.

Following her discharge in 1945, Coffey continued to work as a civilian for the Army in Okinawa, Japan for 13 years, and then returned to Texas to continue her service in the procurement office at Kelly Air Force Base in San Antonio, Texas until her retirement in 1971.

In addition to meeting with President Obama and Vice President Biden, Coffey received a personal tour of both wings of the White House, and visited the Rose Garden.

Watch the video below — we're sure it will make your day: