President Obama in Kansas City: “Let’s Get Some Work Done Together”

July 30, 2014 at 3:34 PM ET by Cameron Brenchley
Twitter Facebook Email
Summary:
President Obama travels to Kansas City, Missouri for a short one-day trip to have dinner with several people who had written him letters, and to give a speech on ensuring that the economy works for everyone. 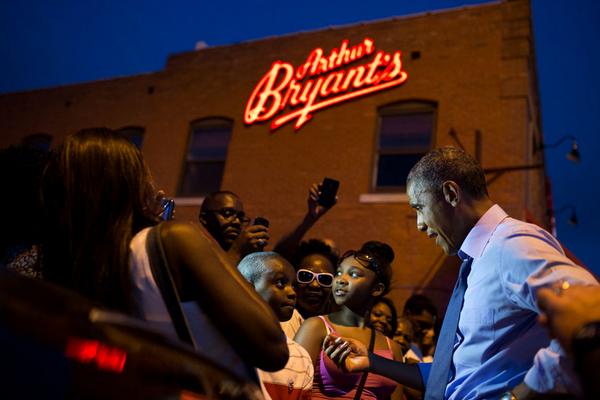 Yesterday, President Obama traveled to Kansas City, Missouri for a short one-day trip to have dinner with several people who had written him letters, and to give a speech today on ensuring that the economy works for everyone.

Last night, the President had dinner at Arthur Bryant’s BBQ in Kansas City with four local residents who had written to him to share how they're working hard to get ahead in America.

This is just the latest stop the President has made while on the road to meet with hardworking Americans who have written him, and to let them know he’s listening.

Victor, who joined the President for BBQ last night, is one of those letter writers. He wrote the President to explain how a student loan Income Based Repayment Plan had helped him and his family, and during dinner, told the President that the Affordable Care Act was key to his family getting health insurance. Victor introduced the President earlier today at the historic Uptown Theater in Kansas City, and joked that the President “can really tear up some ribs.”

After taking the podium, the President noted that Victor wasn’t too shy about eating, either. But the President quickly got down to the primary reason for his speech.

I’m here because Victor is the sort of person I'm working for every single day, somebody who never quits, somebody who is doing everything right, somebody who believes in the American dream. Somebody who just wants a chance to build a decent life for himself and his family. And that's the vast majority of Americans. That's who I'm fighting for right here in Kansas City and all across this country. 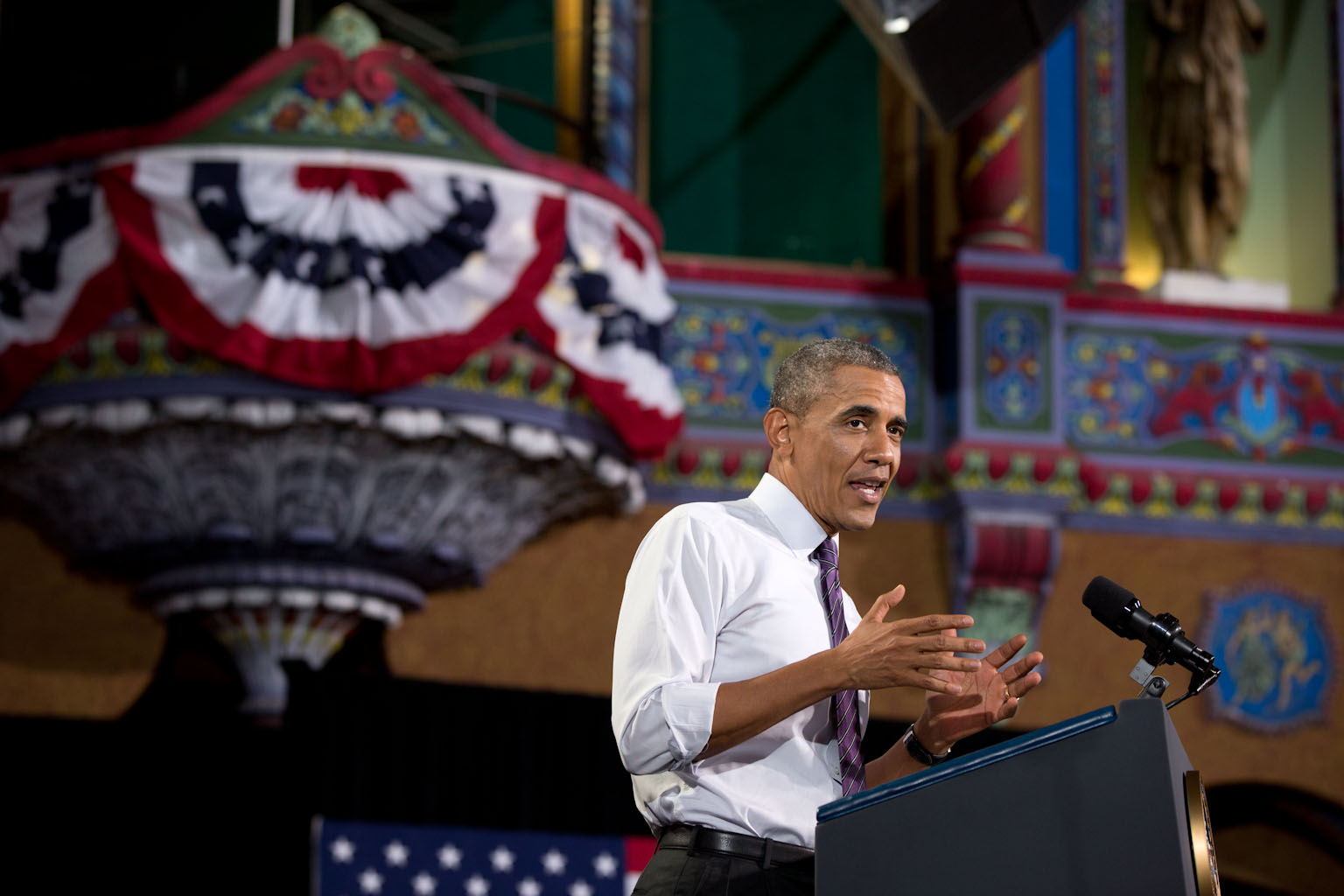 When the President took office, the economy was in free fall, but since then we’ve fought back and our country has improved by almost every economic measure. The President pointed out the progress we’ve made together.

Today, our businesses have added nearly 10 million new jobs over the past 52 months. Construction is up. Manufacturing is back. Our energy, our technology, our auto industries, they’re all booming.

The unemployment rate is at its lowest point since September of 2008. It's dropped faster than any time in 30 years. This morning, we found out that in the second quarter of this year our economy grew at a strong pace, and businesses are investing, workers are building new homes, consumers are spending, America is exporting goods around the world.

The President noted that we’re the world’s number one oil and gas producer, that our high school graduation rate is at a record high, home prices are rising, and millions of families are getting the affordable health insurance they need. And the President made it clear that we’d be even stronger if Republicans would be willing to work together.

“Republicans in Congress keep blocking or voting down just about every idea that would have some of the biggest impact on middle-class and working-class families.”

And that obstruction comes at a cost to hard-working Americans and our economy.

They’ve said no to raising the minimum wage. They’ve said no to fair pay, making sure that women have the ability to make sure that they’re getting paid the same as men for doing the same job. They’ve said no for fixing our broken immigration system. Rather than investing in education, they actually voted to give another massive tax cut to the wealthiest Americans. And they’ve been pushing to gut the rules that we put in place after the financial crisis to make sure big banks and credit card companies wouldn’t take advantage of consumers or cause another crisis. So they haven’t been that helpful.

The President is taking action to support middle class Americans, but he said that if Congress were willing to work together, we could be doing so much more.

“Come on and help out a little bit. Stop being mad all the time. Stop just hating all the time…Let’s get some work done together.”

In two days, Congress leaves Washington for a month, and the President noted that there is still time to get things done. But rather than voting on bills that would provide resources to fight wildfires in the West, or prevent the Highway Trust Fund from running out of money, the President pointed out that Republicans in Congress are focused on one issue.

“The main vote that they’ve scheduled for today is whether or not they decide to sue me for doing my job."

Despite the gridlock in Washington, the President is optimistic about the “inherent goodness and generosity of the American people.”

“You don't have time to be cynical. Hope is a better choice.”

Read the President’s full remarks here, or watch them below: 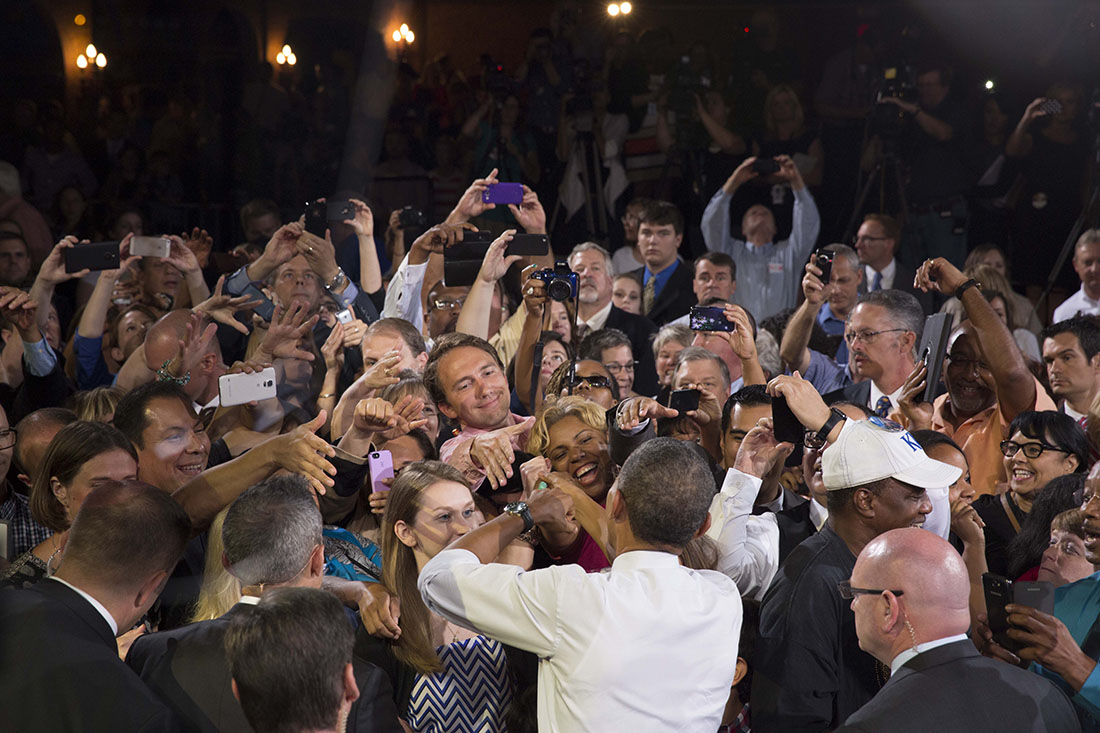