August 1, 2014 at 10:03 AM ET by Jo Handelsman
Twitter Facebook Email
Summary:
Yesterday, President Obama welcomed four American Kavli Prize laureates into the Oval Office to applaud their contributions to the scientific community. This year, nine scientists received the award, including Americans Alan H. Guth and Andrei D. Linde, who received the Prize in Astrophysics for their work on the theory of cosmic inflation, and Marcus E. Raichle and John O’Keefe, who were awarded in Neuroscience for their discovery of specialized brain networks for memory and cognition. 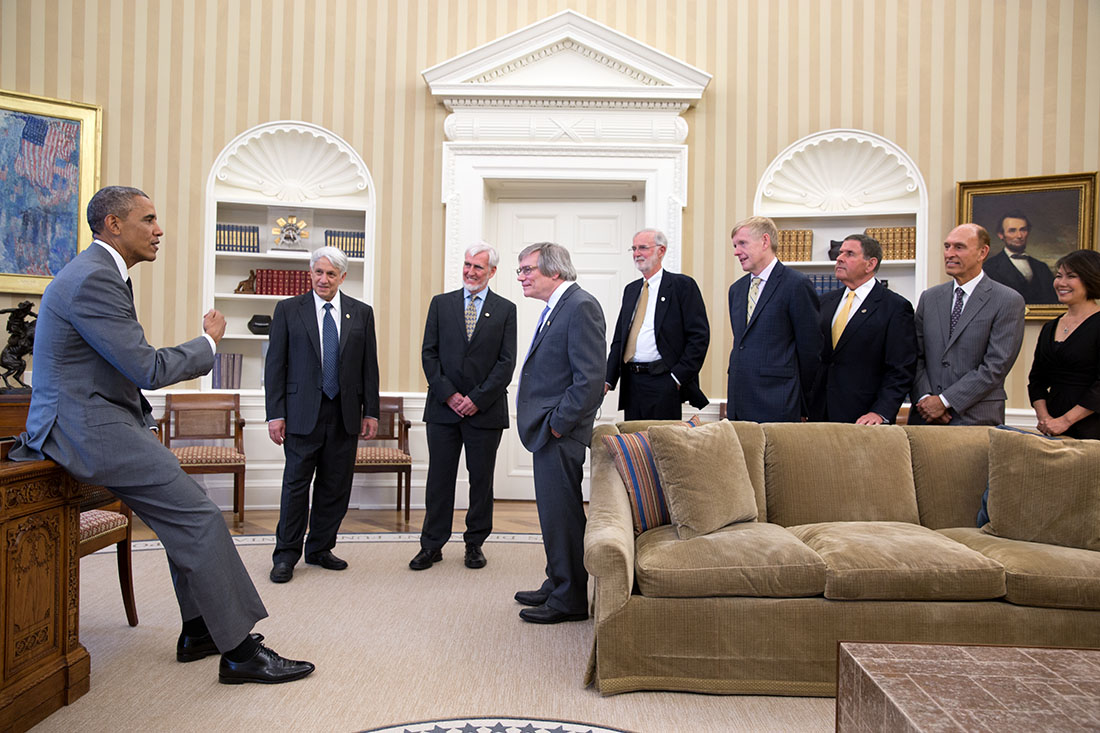 Yesterday, President Obama welcomed four American Kavli Prize laureates into the Oval Office to congratulate them and applaud their contributions to the scientific community.  The Kavli Prize, awarded in Oslo, Norway every two years, recognizes scientists in the fields of astrophysics, nanoscience, and neuroscience. This year, nine scientists received the award, including four Americans: Alan H. Guth and Andrei D. Linde, who received the Kavli Prize in Astrophysics for their work on the theory of cosmic inflation, and Marcus E. Raichle and John O’Keefe, who were awarded the Kavli Prize in Neuroscience for their discovery of specialized brain networks for memory and cognition.

The Kavli Prize — a partnership between The Kavli Foundation, The Norwegian Academy of Science and Letters, and The Norwegian Ministry of Education and Research — awards each recipient 1 million U.S. dollars to further their research goals. The late Fred Kavli founded the Kavli Foundation and established The Kavli Prize to advance science with a humanitarian impact and to increase awareness about the importance of scientific research.

This year’s Kavli Prize honors several scientific discoveries.  The theory of cosmic inflation was first proposed by Alan Guth in 1981 as a solution to significant unanswered questions in the well-known Big Bang theory, and was developed and honed by Andrei Linde the next year. Cosmic inflation describes the behavior of the universe a mere fraction of a second into its existence, and explains phenomena we see today by proposing a model of rapid exponential expansion that resounds in the structure and geometry of today’s universe.

Kavli Prize winners and neuroscientists John O’Keefe and Marcus Raichle changed our understanding of the functions of the human brain, with implications for the treatment of neurological disorders like Alzheimer’s disease as well as conditions like anxiety and depression. For example, John O’Keefe’s study of the hippocampus and its role in spatial memory led to his formation of the cognitive map theory, which explains animal navigation behavior. In addition, Marcus Raichle designed and built upon novel methods for brain imaging, enabling scientists to identify specific areas of the brain used for certain tasks and changing the way that the human brain is studied in both health and disease.

The work of these scientist impacts their fields today, and also provides the foundation for the next generation of thinkers to solve problems we may not even know exist.  “This year’s Kavli Laureates are working on the frontiers of human knowledge and capability, from the far reaches of deep space to the intricate neural networks of the mind,” said John P. Holdren, President Obama’s Science Advisor. “Achievements like these will no doubt inspire dreamers across the Nation to ask bold questions and take on the challenge of discovering answers.”