President Obama Makes a Statement on the Crisis in Iraq

August 7, 2014 at 10:40 PM ET by David Hudson
Twitter Facebook Email
Summary:
In a statement addressing the current crisis in Iraq, President Obama announced that he authorized two operations in the country -- "targeted airstrikes to protect our American personnel, and a humanitarian effort to help save thousands of Iraqi civilians who are trapped on a mountain without food and water and facing almost certain death."

Tonight, in a statement addressing the current crisis in Iraq, President Obama announced that he authorized two operations in the country -- "targeted airstrikes to protect our American personnel, and a humanitarian effort to help save thousands of Iraqi civilians who are trapped on a mountain without food and water and facing almost certain death."

The President went on to explain the actions the United States is taking, and why:

First, I said in June -- as the terrorist group ISIL began an advance across Iraq -- that the United States would be prepared to take targeted military action in Iraq if and when we determined that the situation required it.  In recent days, these terrorists have continued to move across Iraq, and have neared the city of Erbil, where American diplomats and civilians serve at our consulate and American military personnel advise Iraqi forces.

To stop the advance on Erbil, I’ve directed our military to take targeted strikes against ISIL terrorist convoys should they move toward the city.  We intend to stay vigilant, and take action if these terrorist forces threaten our personnel or facilities anywhere in Iraq, including our consulate in Erbil and our embassy in Baghdad.  We’re also providing urgent assistance to Iraqi government and Kurdish forces so they can more effectively wage the fight against ISIL.

Second, at the request of the Iraqi government -- we’ve begun operations to help save Iraqi civilians stranded on the mountain.  As ISIL has marched across Iraq, it has waged a ruthless campaign against innocent Iraqis.  And these terrorists have been especially barbaric towards religious minorities, including Christian and Yezidis, a small and ancient religious sect.  Countless Iraqis have been displaced.  And chilling reports describe ISIL militants rounding up families, conducting mass executions, and enslaving Yezidi women.

In recent days, Yezidi women, men and children from the area of Sinjar have fled for their lives.  And thousands -- perhaps tens of thousands -- are now hiding high up on the mountain, with little but the clothes on their backs.  They’re without food, they’re without water.  People are starving.  And children are dying of thirst.  Meanwhile, ISIL forces below have called for the systematic destruction of the entire Yezidi people, which would constitute genocide.  So these innocent families are faced with a horrible choice:  descend the mountain and be slaughtered, or stay and slowly die of thirst and hunger.

President Obama reiterated that the U.S. "cannot and should not intervene every time there’s a crisis in the world," but explained why the current situation in Iraq requires the U.S. to act -- and act now:

When we face a situation like we do on that mountain -- with innocent people facing the prospect of violence on a horrific scale, when we have a mandate to help -- in this case, a request from the Iraqi government -- and when we have the unique capabilities to help avert a massacre, then I believe the United States of America cannot turn a blind eye.  We can act, carefully and responsibly, to prevent a potential act of genocide.  That’s what we’re doing on that mountain.

I’ve, therefore, authorized targeted airstrikes, if necessary, to help forces in Iraq as they fight to break the siege of Mount Sinjar and protect the civilians trapped there.  Already, American aircraft have begun conducting humanitarian airdrops of food and water to help these desperate men, women and children survive.  Earlier this week, one Iraqi in the area cried to the world, “There is no one coming to help.”  Well today, America is coming to help.  We’re also consulting with other countries -- and the United Nations -- who have called for action to address this humanitarian crisis. 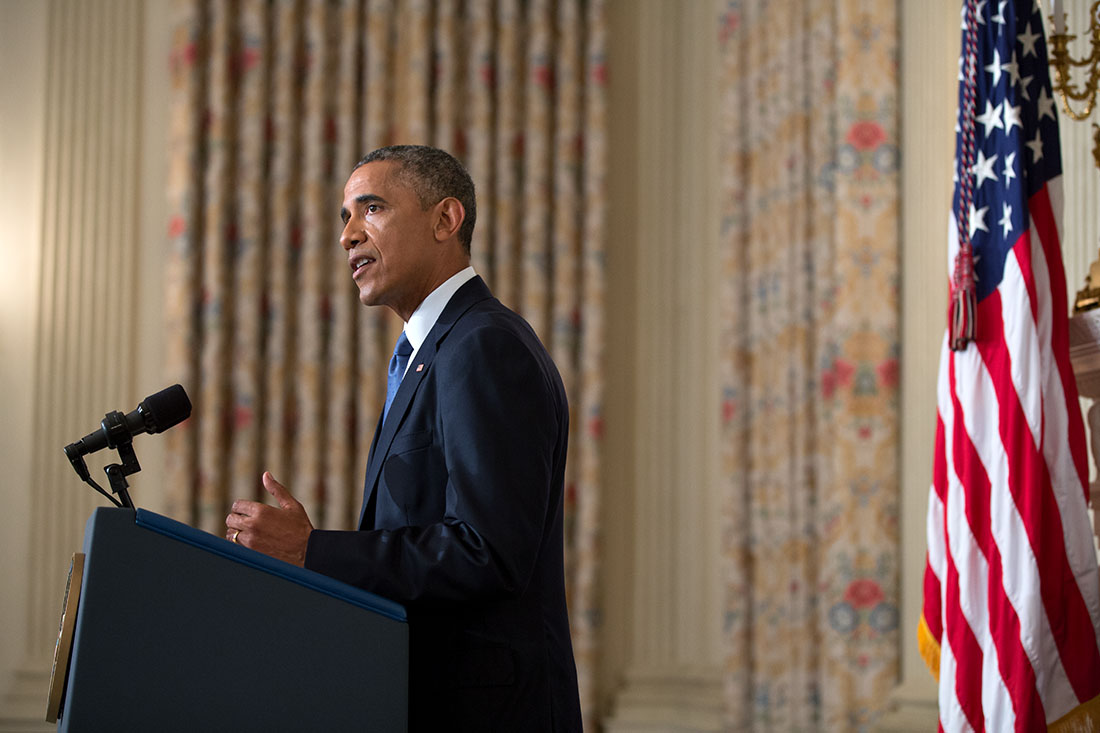 The President also said that he understands many people are "rightly concerned about any American military action in Iraq, even limited strikes like these" -- and made clear that he "will not allow the United States to be dragged into fighting another war in Iraq."

"Even as we support Iraqis as they take the fight to these terrorists, American combat troops will not be returning to fight in Iraq," he said.

There’s no American military solution to the larger crisis in Iraq.  The only lasting solution is reconciliation among Iraqi communities and stronger Iraqi security forces.

However, we can and should support moderate forces who can bring stability to Iraq.  So even as we carry out these two missions, we will continue to pursue a broader strategy that empowers Iraqis to confront this crisis.  Iraqi leaders need to come together and forge a new government that represents the legitimate interests of all Iraqis, and that can fight back against the threats like ISIL.  Iraqis have named a new President, a new Speaker of Parliament, and are seeking consensus on a new Prime Minister.  This is the progress that needs to continue in order to reverse the momentum of the terrorists who prey on Iraq’s divisions.

Once Iraq has a new government, the United States will work with it and other countries in the region to provide increased support to deal with this humanitarian crisis and counterterrorism challenge.  None of Iraq’s neighbors have an interest in this terrible suffering or instability.

And so we’ll continue to work with our friends and allies to help refugees get the shelter and food and water they so desperately need, and to help Iraqis push back against ISIL.  The several hundred American advisors that I ordered to Iraq will continue to assess what more we can do to help train, advise and support Iraqi forces going forward.  And just as I consulted Congress on the decisions I made today, we will continue to do so going forward.