August 11, 2014 at 7:45 PM ET by Lena Jordi-Cruzval
Twitter Facebook Email
Summary:
Most people know about The Old Guard and its role as caretaker of Arlington National Cemetery. Images of soldiers guarding the Tomb of the Unknown, despite rain or snow, are famous throughout the world. However, the regiment’s mission is more involved than what meets the eye. 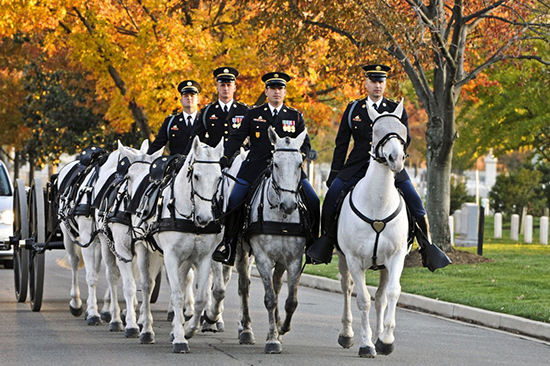 Ed. note: This is cross-posted on the VAntage Point blog. See the original post here.

Most people know about The Old Guard and its role as caretaker of Arlington National Cemetery. Images of soldiers guarding the Tomb of the Unknown, despite rain or snow, are famous throughout the world. However, the regiment’s mission is more involved than what meets the eye.

The Old Guard’s primary mission is to render honors and conduct the funeral ceremonies of departed Veterans and Servicemembers. They also assist grieving families in coping with the loss of a loved one. 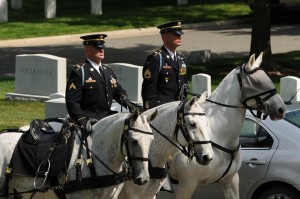 Staff Sgt. John Ford (right) rides in formation during a ceremony at Arlington. (Photo courtesy of the VA)

This last aspect of the mission is one of the reasons that U.S. Army Staff Sgt. John Ford decided to change his career path from an infantryman in Delta Company, 1st Battalion, 502nd Infantry Regiment, under the 101st Airborne Division, to a distinguished soldier of the Old Guard.

“The United States Army grieves with [the families]. We share the burden of their loss and pain,” Ford said.

Ford is part of Caisson Platoon, comprised of 56 soldiers and two Army civilians. They follow a four-week cycle that runs Wednesday through Tuesday, to ensure continuity over the weekend, and to allow the horses a two-day break in the middle of their riding week. Each four-week cycle consists of two weeks in the cemetery, one week of main barn maintenance, and one week in the Shire barn conducting horsemanship training.

With two teams, or four soldiers and six horses at the cemetery every day, the platoon is an active contributor to the regiment’s mission of honoring Veterans and Servicemembers, which makes it an essential piece of the official ceremonial unit of the Army.

Ford has been part of the distinguished platoon for the past two years, and has participated in countless ceremonies and special events at the cemetery. But one episode in particular stands out for him, reminding him of the importance of his profession.

“The weather was atrocious and the horses were antsy because of it,” Ford said as he recalled the difficult conditions brought on by a passing storm. That he was riding for a different squad, and not on his usual mount, made things worse for him.

Ford returned to the barn—soaked to the skin and itchy from horsehair—to take the riding equipment off his horse and put her away. He then saw a family peering through the screen door of the barn. Since it was still visiting hours, the platoon invited them in to meet the horses. The young mother, accompanied by her parents and her four-year-old son, seemed honored to be able to meet the platoon and the horses.

“I found out from [the mother] that we had conducted her husband’s funeral. He was killed in action when the boy was six months old,” Ford said.

What Ford did next took only a moment, but carried great meaning. With the family, the platoon staff looked back into their records to find out which horses participated in the father’s funeral, and then introduced the boy to the horses that had carried his father on his final ride.

Personal experiences like this one serve to remind Ford that his is a proud and priceless profession, and that the Old Guard—especially the Caisson Platoon—is  important in supporting our country’s dreams for freedom.

In reflecting on the impromptu visit, Ford said “It reminded me that what we are doing here matters; that our mission here directly affects the families of the fallen.”