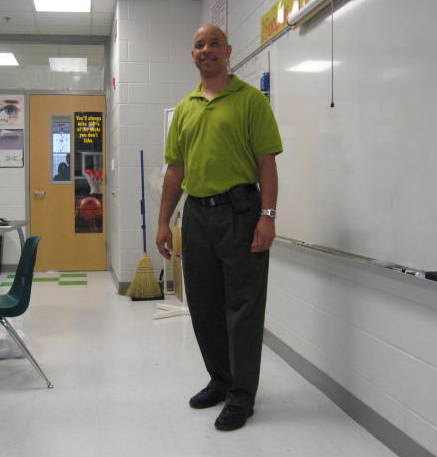 August’s Troops to Teachers Spotlight, Martin Screen, a retired Air Force chief master sergeant, teaches seventh and eighth grade math at Eddie White K8 Academy in Hampton, Georgia. Before beginning his second career as a math teacher, Mr. Screen served for 22 years as a communications specialist in the Air Force. Like most in the military, his assignments crossed the globe – several times. Nine US states and Japan, Germany and Saudi Arabia were “home” to Mr. Screen and his family at one point or another. He says that each assignment was filled with wonderful memories, opportunities and experiences.

During his service, Mr. Screen was committed to completing his studies and enrolled in the University of Maryland University College during his first assignment in Japan. He continued to pursue a degree, one class at a time, and during his tour in Germany, he completed his bachelor’s degree.

A few years after his 2006 retirement, he found himself in the classroom as a substitute teacher. His principal was impressed with his teaching and suggested that he become a certified teacher. Troops to Teachers supported Mr. Screen’s efforts to earn his teaching certification and offered him the opportunity to work with disadvantaged students.  Funding support from Troops to Teachers also helped to eliminate the financial burden of returning to school.

In 2011, Mr. Screen helped open the Eddie White K8 Academy, and in 2012, he was named the school’s inaugural Teacher of the Year.  He continues to look for opportunities to help his students and for the past three years has spearheaded a Saturday school program to give students extra academic support.

Dr. Juerita Caruthers, the school’s vice principal says, “role models such as Mr. Screen are essential to our schools and the students of today.  It’s times like this that we need visionaries, individuals with a heart of service, and those that will roll up their sleeves to plant positive seeds for our future leaders.”

Screen says he is proud to serve again. For him, “teaching is serving. Expectations are high, but I know I can deliver because at the end of the day, it’s all about the kids. I’m here for them! It’s so much more than academics – it’s simply life changing, for me and my students. When the light bulb goes off [and] a student understands a concept, it’s simply priceless. I will give it 100 percent because – one student at a time – lives are being changed.”