Chart of the Week: Job Openings Hit a 13-Year High This Summer

Each day, American businesses are firing on all cylinders to create jobs and drive America's economic growth. Just last month, our private sector added jobs for the 53rd straight month, the longest streak on record. In total, American businesses have added 9.9 million jobs since early 2010. This week, we saw another sign of progress, as the number of available jobs rose to the highest level in more than 13 years.

American business owners advertised 4.67 million jobs in June, the highest number of openings since February 2001 — a clear signal that the economy is strengthening. Take a look at how we went from record lows during the Great Recession to hitting a new high this summer — then share the good news: 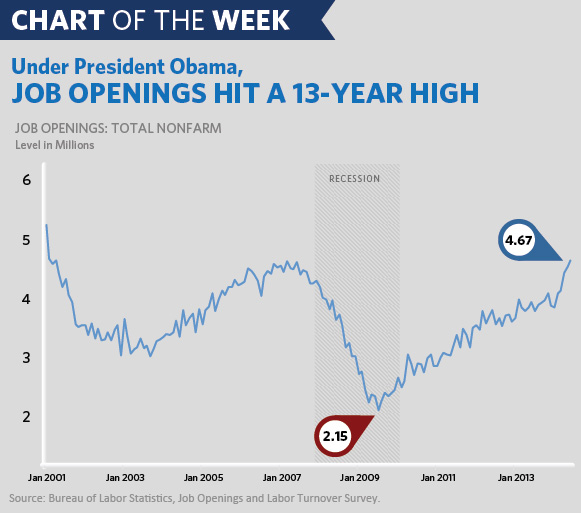 This chart depicts the total number of nonfarm job openings that American employers have offered since 2001. The increasing number of job openings means employers are looking to hire and expand — a good indication that our economy is continuing to grow.

In order to continue this momentum, the President is dedicated to working with Congress to enact policies that will expand economic security and opportunity for all and create new jobs, including raising the minimum wage and investing in areas like infrastructure and manufacturing.

While he is committed to working with Congress, he will not wait to take action on behalf of the American people. Take a look at the actions the President has taken this year alone to strengthen our economy and the security of our middle class.