President Obama Provides an Update on the Latest in Iraq and Ferguson, Missouri

August 18, 2014 at 7:56 PM ET by Tanya Somanader
Twitter Facebook Email
Summary:
This afternoon at the White House, President Obama delivered a statement on the latest developments in Iraq and in Ferguson, Missouri — two issues he has been following closely each day.

This afternoon at the White House, President Obama delivered a statement on the latest developments in Iraq and in Ferguson, Missouri — two issues he has been following closely each day.

First, the President relayed to the nation that the American operation in Iraq has effectively protected our personnel by stopping the terrorist group ISIL from advancing on the city of Erbil, and by helping Iraqi forces to recapture the largest dam in Iraq:

The Mosul Dam fell under terrorist control earlier this month and is directly tied to our objective of protecting Americans in Iraq. If that dam was breached, it could have proven catastrophic, with floods that would have threatened the lives of thousands of civilians and endangered our embassy compound in Baghdad. Iraqi and Kurdish forces took the lead on the ground and performed with courage and determination. So this operation demonstrates that Iraqi and Kurdish forces are capable of working together in taking the fight to ISIL. If they continue to do so, they will have the strong support of the United States of America.

President Obama also noted that the U.S. is building an international coalition to address the humanitarian crisis in northern Iraq:

Even as we've worked to help many thousands of Yazidis escape the siege of Mount Sinjar, hundreds of thousands of Iraqis have been displaced by ISIL’s violence and many more are still at risk. Going forward, the United States will work with the Iraqi government, as well as partners like the United Kingdom, Canada, France, Italy and Australia, to get food and water to people in need and to bring long-term relief to people who have been driven from their homes.

The long-term strategy against ISIL requires an inclusive Iraqi government that can unite all of Iraq’s communities against ISIL’s terrorism. The President outlined the “historic progress” Iraq has made toward this goal and the work that remains:

Over the next few weeks, Dr. Abadi needs to complete the work of forming a new, broad-based, inclusive Iraqi government, one that develops a national program to address the interests of all Iraqis. Without that progress, extremists like ISIL can continue to prey upon Iraq’s divisions. With that new government in place, Iraqis will be able to unite the country against the threat from ISIL, and they will be able to look forward to increased support not just from the United States but from other countries in the region and around the world.

"There should be no doubt that the United States military will continue to carry out the limited missions that I've authorized -- protecting our personnel and facilities in Iraq in both Erbil and Baghdad, and providing humanitarian support, as we did on Mount Sinjar," he said.

After meeting with Attorney General Eric Holder this afternoon, President Obama also provided an update on the situation in Ferguson, Missouri and the federal investigation into the tragic death of 18-year-old Michael Brown:

The Justice Department has opened an independent federal civil rights investigation into the death of Michael Brown. They are on the ground and, along with the FBI, they are devoting substantial resources to that investigation. The Attorney General himself will be traveling to Ferguson on Wednesday to meet with the FBI agents and DOJ personnel conducting the federal criminal investigation, and he will receive an update from them on their progress. He will also be meeting with other leaders in the community whose support is so critical to bringing about peace and calm in Ferguson.

Ronald Davis, the Director of the DOJ’s Office of Community-Oriented Policing Services -- or COPS -- is also traveling to Ferguson tomorrow to work with police officials on the ground. We've also had experts from the DOJ’s Community Relations Service working in Ferguson since the days after the shooting to foster conversations among local stakeholders and reduce tensions among the community. 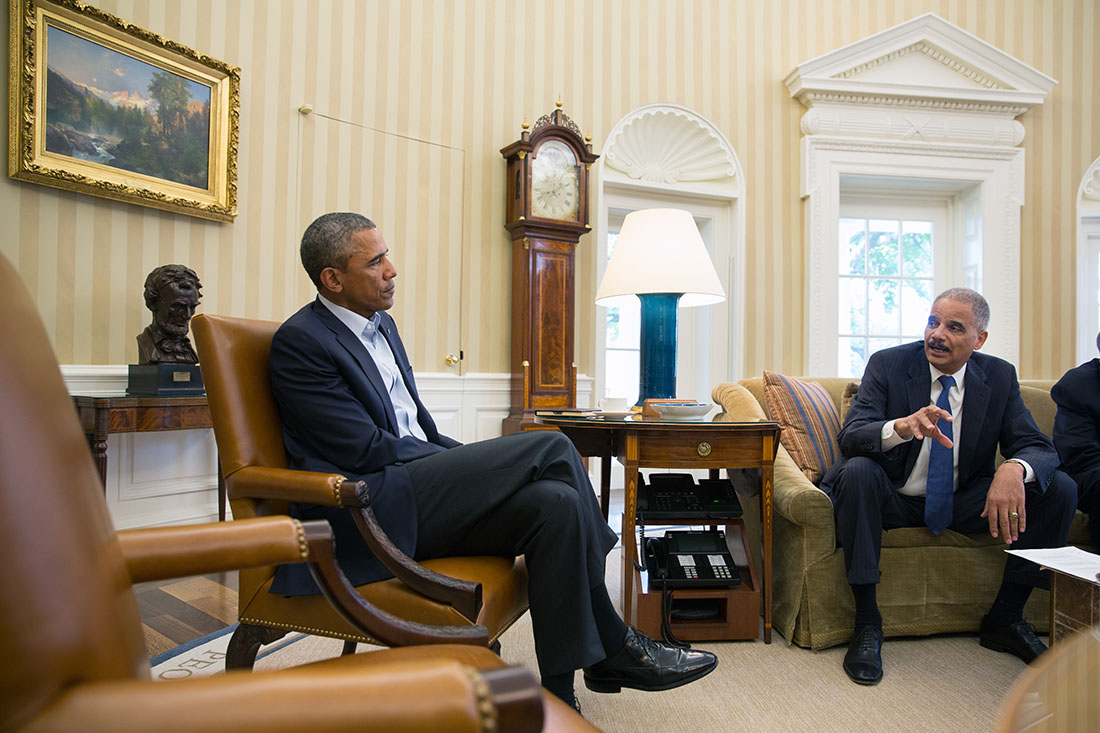 The President closed by speaking to "a community in Ferguson that is rightfully hurting and looking for answers":

As Americans, we've got to use this moment to seek out our shared humanity that's been laid bare by this moment -- the potential of a young man and the sorrows of parents, the frustrations of a community, the ideals that we hold as one united American family.

I’ve said this before -- in too many communities around the country, a gulf of mistrust exists between local residents and law enforcement. In too many communities, too many young men of color are left behind and seen only as objects of fear. Through initiatives like My Brother’s Keeper, I'm personally committed to changing both perception and reality. And already we're making some significant progress as people of goodwill of all races are ready to chip in. But that requires that we build and not tear down. And that requires we listen and not just shout. That's how we're going to move forward together, by trying to unite each other and understand each other, and not simply divide ourselves from one another. We're going to have to hold tight to those values in the days ahead. That's how we bring about justice, and that's how we bring about peace.