Making for a Stronger Africa

August 19, 2014 at 12:06 PM ET by Eric King, Stephanie Santoso, and Kate Gage
Twitter Facebook Email
Summary:
This month, the first class of the President’s Young African Leaders Initiative (YALI) Mandela Washington Fellows converged on Washington, D.C. for their inaugural Presidential Summit. During the Summit, many of the Fellows joined the US Global Development Lab and the White House Office of Science and Technology Policy at Fab Lab DC to discuss the role of making in Africa’s economic and community development.

This month, the first class of the President’s Young African Leaders Initiative (YALI) Mandela Washington Fellows converged on Washington, D.C. for their inaugural Presidential Summit.  During the Summit, many of the Fellows joined the US Global Development Lab and the White House Office of Science and Technology Policy at Fab Lab DC to discuss the role of making in Africa’s economic and community development.

The Maker Movement is transforming the way we design and produce things – both here at home and overseas. At this year’s first-ever White House Maker Faire, President Obama described making as “a revolution that can help us create new jobs and industries for decades to come.” In recognition of the potential of young African visionaries to advance the Maker Movement, YALI is working to equip change-makers with the tools they need to foster progress across the continent.

Community maker spaces are already springing up around the world, providing public access to tools and technologies like 3D printers, laser cutters, and low-cost modular electronics, which dramatically change the rules of invention - anyone with an idea can bring that idea to life. By democratizing the means to create, digital manufacturing lowers the barrier to entrepreneurship around the world, including in developing regions like Sub-Saharan Africa.

In 2012, Togolese entrepreneur Sename Koffi Abdojinou founded WoeLab, a bootstrapped maker space and business incubator built on an ethos of community design and open-access hardware in low resource settings. Illustrating the power of this philosophy in action, WoeLab member Afate Gnikou invented a 3D printer made primarily from discarded electronics, or e-waste, scrapped from landfills. The invention’s design has been openly published, so makers across Africa and the rest of the world can leverage his ingenuity to sow the seeds of digital fabrication in their own communities.  This year at the Fab10 maker conference, WoeLab’s e-waste 3D printer was awarded the Global Fab Award.

Maker spaces like Abdojinou’s WoeLab promote hands-on STEM education; they empower ordinary people to develop local solutions to the challenges faced in their communities; they encourage entrepreneurship.  In October 2013, Togo celebrated its ten most promising young entrepreneurs. Three of them came from WoeLab. 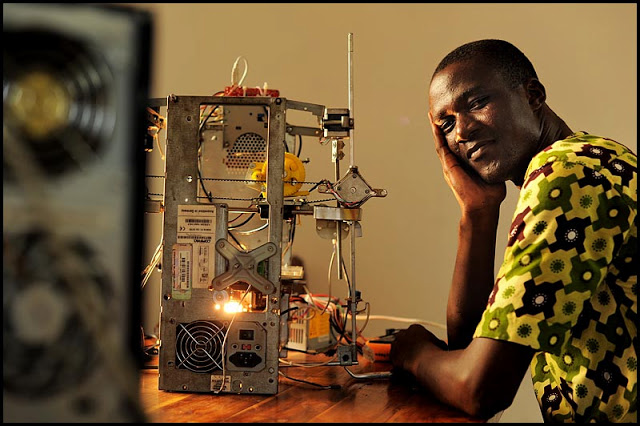 The maker movement paves a clear path toward local problem solving and entrepreneurship, both hallmarks of the Mandela Fellowship, as we learned firsthand. Fellow Abibatou Banda Fall helps women develop products to improve their livelihoods, like a low cost thermal basket to keep goods warm as they’re taken to markets, in Senegal. Lukonga Lindunda operates a co-working space to support innovative tech entrepreneurs in Zambia. Selma Neves helps struggling single mothers lift themselves out of poverty through self-employment training and support in Cabo Verde. Ruth Lukwaro pairs inventors with business students to build sustainable social enterprises in Tanzania. Mutoba Ngoma turns agricultural waste into consumer goods like biodiesel fuel for local markets in Zambia. Tatiana Pereira runs a business incubator for early-stage startups in Mozambique. “I can have greater impact on people’s lives by sharing knowledge and strengthening the ones around me,” she said.  “Success is the entrepreneurs that start and succeed.”

The Fellows also had an opportunity to speak with Emeka Okafor, founder of Maker Faire Africa, who encouraged them to cultivate a culture of making.  “Making is central to leading Africa where it needs to be: a developing, problem solving region,” he said. “It’s imperative that communities from Cairo to the Cape unfetter their populations with tools from within. Making is pivotal if this is to occur.” Maker Faire Africa showcases makers’ ingenuity and strengthen their pan-African network. Started in 2009, the organization has hosted events in four different African countries. The next Maker Faire Africa will be held later this year.

Looking forward, makers in Africa are faced with a spectrum of challenges, ranging from amplified versions of those familiar to American entrepreneurs like gaining access to venture capital and low-cost manufacturing, to more frustrating hurdles like inadequate electricity and supply chain infrastructure. Daunting though these challenges may be, the gritty determination of young African leaders like Abdojinou is unwavering. Africa’s makers and entrepreneurs will help shape the future of the continent.  “Growth,” said Pereira, “comes from people who act and make things happen - entrepreneurs. Africa is full of opportunities and young people with great potential.”

Stephanie Santoso is a Researcher at the White House Office of Science and Technology Policy.

Eric King is an Innovation Specialist at  the U.S. Global Development Lab (@eric_m_king).