Chart of the Week: Auto Production at Its Highest Rate Since 2002

August 21, 2014 at 11:42 AM ET by Tanya Somanader
Twitter Facebook Email
Summary:
The American auto industry is once again a thriving source of our economic strength. The number of cars coming off our assembly lines just reached its highest level in 12 years.

The American auto industry remains a cornerstone of our economy -- a key source of our ability to export, innovate, and create jobs. During the economic turmoil of the Great Recession, the auto sector shed hundreds of thousands of jobs, and production dropped to the lowest level recorded in data going back to the 1960s. In 2009, President Obama took decisive action to rescue the industry from imminent collapse, saving more than 1 million jobs across the country.

Now, our auto industry is once again a source of economic strength, with more and more of the world’s top-of-the-line, fuel-efficient vehicles being made by American workers in American factories. In fact, the number of cars coming off our assembly lines just reached its highest level in 12 years.

Check out how fast the American auto industry has bounced back under President Obama -- then share this chart with everyone who needs to see this progress: 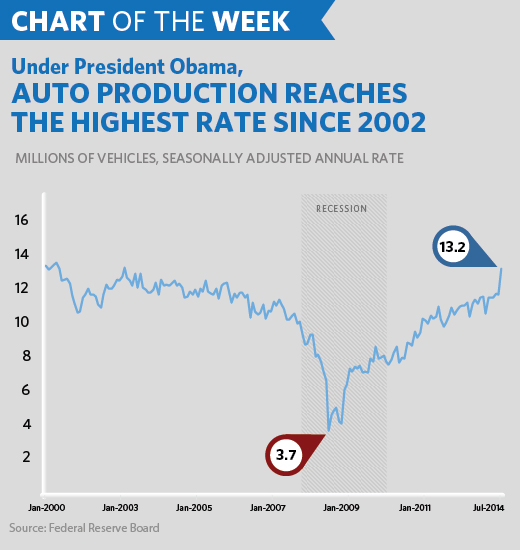 As this chart shows, the number of vehicles built on American assembly lines since 2000 rose to a seasonally adjusted annualized rate of 13.2 million vehicles in July. The increase in auto production mirrors the growing strength of America’s manufacturing sector, which has added more than 700,000 jobs since early 2010.

Building on this progress, President Obama is committed to taking further steps to boost American manufacturing. That's why he's using his pen and his phone to take action and spur more jobs and investment in U.S. manufacturing by:

Learn more about what the President has already done in this year of action: http://obamawhitehouse.archives.gov/year-of-action