August 26, 2014 at 10:44 AM ET by Valerie Jarrett
Twitter Facebook Email
Summary:
On this Women’s Equality Day, we pay homage to the trailblazers who fought for our suffrage and made a more just and prosperous future possible for all Americans. 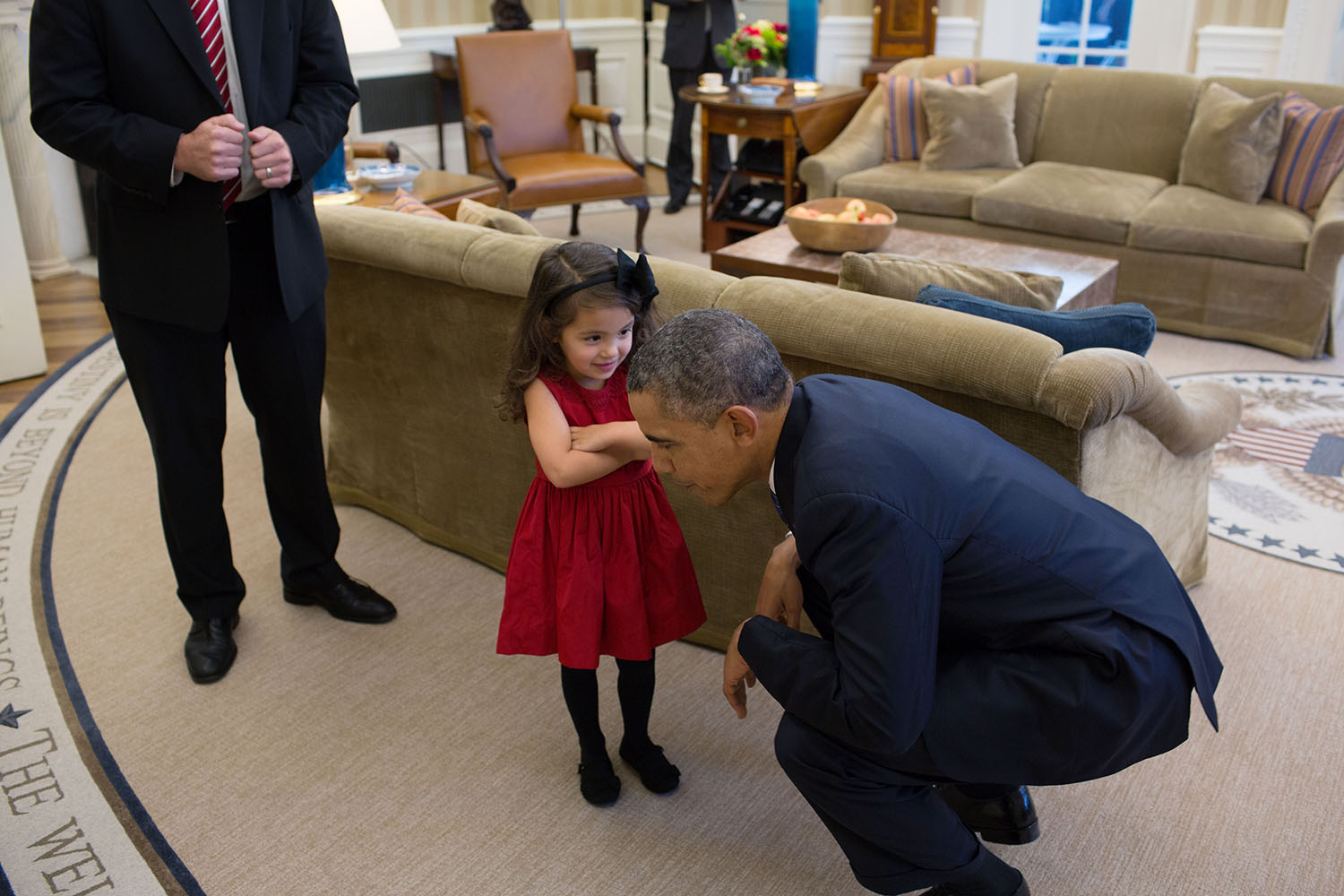 President Barack Obama bends down to listen to the daughter of a departing U.S. Secret Service agent in the Oval Office, Oct. 28, 2013. (Official White House Photo by Lawrence Jackson)

Etched into the history of our Nation are the stories of women who fought for the America they knew was possible — a country where all are truly treated equally and have access to the ballot box, regardless of gender. It took generations of fearless women who organized and advocated to secure women’s right to vote, and on Women’s Equality Day, we honor these courageous heroes, celebrate how far we have come in the decades since, and acknowledge the work still left to be done.

In the 94 years since the 19th Amendment was certified, women have made strides in every facet of American life, and we have learned that our country succeeds when women succeed. More and more the world is looking to our daughters to lead us, to heal us, to employ us, to thrill us on fields of play, and to protect us on fields of battle. Even still, inequality and discrimination persist. Women, on average, continue to earn less than their male counterparts, and for women of color, the disparity is even wider. Outdated workplace policies force too many working parents to choose between fulfilling their family responsibilities, and the careers of their dreams. And far too many women know what it is to suffer from abuse or sexual assault. 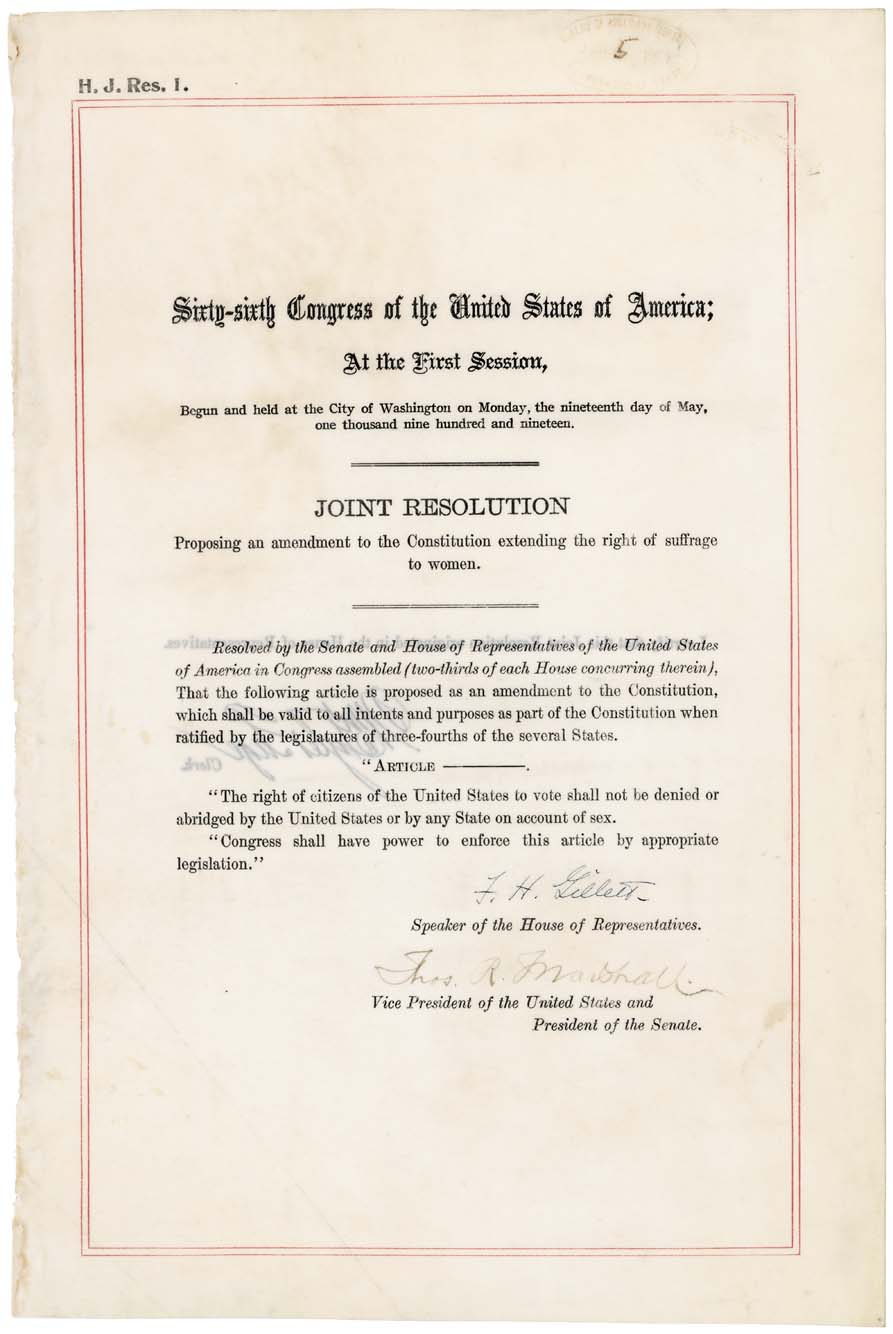 The resolution proposing the Nineteenth Amendment, which was ratified August 18, 1920, and grants a woman's right to vote. June 4, 1919. (by The National Archives and Records Administration)

Since taking office, President Obama has been committed to upholding the rights of women and shattering the glass ceilings that remain. The first bill he signed into law was the Lilly Ledbetter Fair Pay Act, which provides women basic protections against pay discrimination. He established the White House Council on Women and Girls to make sure Federal agencies take into account the needs of women and girls when creating programs and policies. The President signed the reauthorization of the Violence Against Women Act and established the White House Task Force to Protect Students from Sexual Assault, because every woman and girl should be able to pursue her dreams free from the fear of abuse or assault. And thanks to the Affordable Care Act, more women have access to quality, affordable health insurance, preventative care options including contraception, without an additional co-pay, and insurance companies can no longer charge higher rates to women simply because of their gender.

The Obama Administration has also made progress on our agenda to promote and support working families, including hosting the first-ever White House Summit on Working Families. The President has pushed for approximately $25 billion in tax relief to help 26 million working families every year afford the costs of raising a family, to enhance work incentives, and to put more young people on paths to college. On the international stage, President Obama has launched initiatives to combat gender-based violence, to improve access to health care for women, and through efforts like the Equal Futures Partnership, has worked to increase women’s political and economic participation in countries around the world.

On this Women’s Equality Day, we should all pay homage to the trailblazers who fought for our suffrage and made a more just and prosperous future possible for all Americans. And as we do, we should remember those everyday heroes whose names may never appear in history books, or in the press. Our mothers, our grandmothers, our sisters, and our daughters. My mother was my first and most influential teacher, and my daughter has challenged and inspired me to be a better person each and every day of her life. These are the women who inspire us, and who represent the past, present, and future of the fight for women’s equality.

Bastille Day spells prison for sixteen suffragettes who picketed the White House. Miss Julia Hurlbut of Morristown, New Jersey, leading the sixteen members of the National Woman's Party who participated in the picketing demonstration in front of the White House, Washington, District of Columbia, July 14,1917, which led to their arrest. July 14, 1917. (by The National Archives and Records Administration)