Chart of the Week: Where We Stand on Equal Pay for Equal Work

August 28, 2014 at 12:27 PM ET by Tanya Somanader
Twitter Facebook Email
Summary:
Women who enter the workforce after graduating college are paid less in almost every field of study.

Ninety-four years ago this week, American women officially won the right to vote when the United States certified the 19th Amendment to the Constitution. The fight to secure that intrinsic right took generations, and nearly 100 years later, women continue to face persistent inequality and discrimination.

In 2014, women are still fighting to make the principle of equal pay for equal work a reality. Though more and more women are becoming the primary breadwinners in their families, they continue to make less than their male counterparts at all income levels -- a gender pay gap that only widens as people get older.

In fact, women who enter the workforce after graduating college are paid less in almost every field of study: 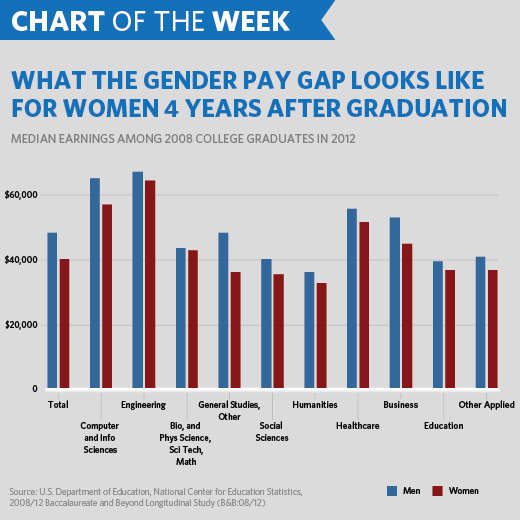 By age 65, the average woman will have lost $431,000 over her working lifetime because of the earnings gap. For women of color, that disparity is even wider.

This persistent wage discrimination is not only an affront to our founding principles of equality, it is a significant drag on our economy. If women received the same pay as their male counterparts, our economy would produce $447.6 billion in additional income.

President Obama has taken action to close this gap, starting with the first bill he signed into law, the Lilly Ledbetter Fair Pay Act. This legislation gives employees the time necessary to confirm wage discrimination and to challenge continuing pay discrimination without being penalized if they aren’t initially aware of the discrimination.

But the President cannot act alone. Congress must help make equal pay a reality by passing the Paycheck Fairness Act, legislation that would ensure that the standards President Obama is putting forward by his executive action apply to all employers across the country. Unfortunately, Senate Republicans have already blocked action on this legislation three times and Republicans continue to block action in the House.

Women have made significant strides over the past 94 years, becoming leaders in almost every facet of American life. But there is more work to do to ensure that women receive the equal rights, equal treatment, and equal opportunity they deserve to reach their potential. Because when women succeed, America succeeds.

Like this chart? See more here thanks to White House economist Betsey Stevenson who has laid out exactly how far women have come in 94 years, and what we still have left to accomplish.