Made in America: 11.3 Million Jobs

September 2, 2014 at 8:00 PM ET by Tanya Somanader
Twitter Facebook Email
Summary:
The innovation and industry of the American worker are the foundations of the world’s largest economy and strongest middle class. A key part of what makes our economy so dominant is what we build here in America.

The innovation and industry of the American worker are the foundations of the world’s largest economy and strongest middle class. A key part of what makes our economy so dominant is what we build here in America. Our electronics, medical equipment, cutting-edge machines, and top-of-the line vehicles are just some of the growing number of exports that are strengthening our economy and creating good-paying jobs here at home.

In fact, a new report from the Department of Commerce shows that America’s goods and services exports directly supported more than 11.3 million American jobs in 2013, with goods exports alone supporting about 7.1 million of those jobs in communities across the country. Texas exports, for example, supported nearly 1.1 million jobs, more than any other state. The city of Houston topped all other metropolitan areas, creating $115 billion in goods exports.

Check out this map to see how many people are making a living thanks to products that are made in America: 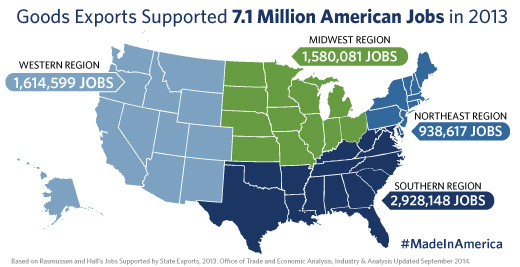 Exports play a key role in American businesses' ability to spur economic growth and create jobs. That is why President Obama launched the National Export Initiative, the first-ever comprehensive exports plan of its kind to help remove trade barriers abroad, to help small businesses overcome hurdles to entering new export markets, to assist with financing, and to pursue a government-wide approach to export advocacy.

To build on the success of the NEI, the President and Commerce Secretary Penny Pritzker are launching NEI/NEXT: a new customer service-driven strategy that will provide the latest resources to help businesses sell their goods and services in overseas markets. Learn more from Secretary Pritzker on how the Obama Administration is helping to boost American exports and grow our economy.