September 2, 2014 at 5:56 PM ET by David Hudson
Twitter Facebook Email
Summary:
The President celebrates Labor Day by visiting the city of Milwaukee for their annual Laborfest, accompanied by Secretary of Labor Tom Perez.

Yesterday, the President celebrated Labor Day by visiting the city of Milwaukee for Laborfest, an annual festival hosted by the local AFL-CIO. While there, he spoke on a number of issues -- most notably the need to raise the minimum wage for America's workers.

Kicking off his remarks, the President said that Labor Day belongs to the "working folks who are here today, and the unions who've always had your back," and emphasized the importance of building our economy from the middle class out:

I didn't run for President to double down on top-down economics. I ran for President because I believed in bottom-up economics. I believed in middle-out economics. I placed a bet on you. I placed a bet on America’s workers. I put my money on American workers and the belief that our economy grows best when everybody has got a shot -- when folks who are willing to work hard can get into the middle class and stay in the middle class. And I’ve come back to Laborfest to say that because of your hard work, because of what we’ve been through together, that bet is starting to pay off.

The President then went on to detail exactly how America is stronger:

"By almost every measure, the American economy and American workers are better off than when I took office," the President said. But "none of this progress has come easy. Every inch of it we have had to fight for. Every inch of it we've had to work against a lockstep opposition that is opposed to everything we do."

"The question now is, are we going to make the right decisions to accelerate this progress?"

It’s a good thing that corporate profits are high; I want American businesses to succeed. It’s a good thing that the stock market is booming; a lot of folks have 401Ks in there, I want them to feel good. But I also want to see the guy who’s breaking his back on two eight-hour shifts so he’s got enough money to send his kids to college, I want to make sure that guy is getting a break. I want to make sure he’s getting some help. I want to see that woman who’s worked for 40 years be able to retire with some dignity and some respect. That’s how I measure progress -- not just by how well the economy is doing overall but how it’s doing for folks who are working so hard doing everything right, just want a fair shot, and didn’t have anything handed to them in their lives, weren’t born with a silver spoon in their mouths.

"That's what at stake," the President said. "Making sure the economy works for everybody."

I want an economy where your hard work pays off with higher wages, and higher incomes, and fairer pay for women, and workplace flexibility for parents, and affordable health insurance, and decent retirement benefits. I’m not asking for the moon, I just want a good deal for American workers. 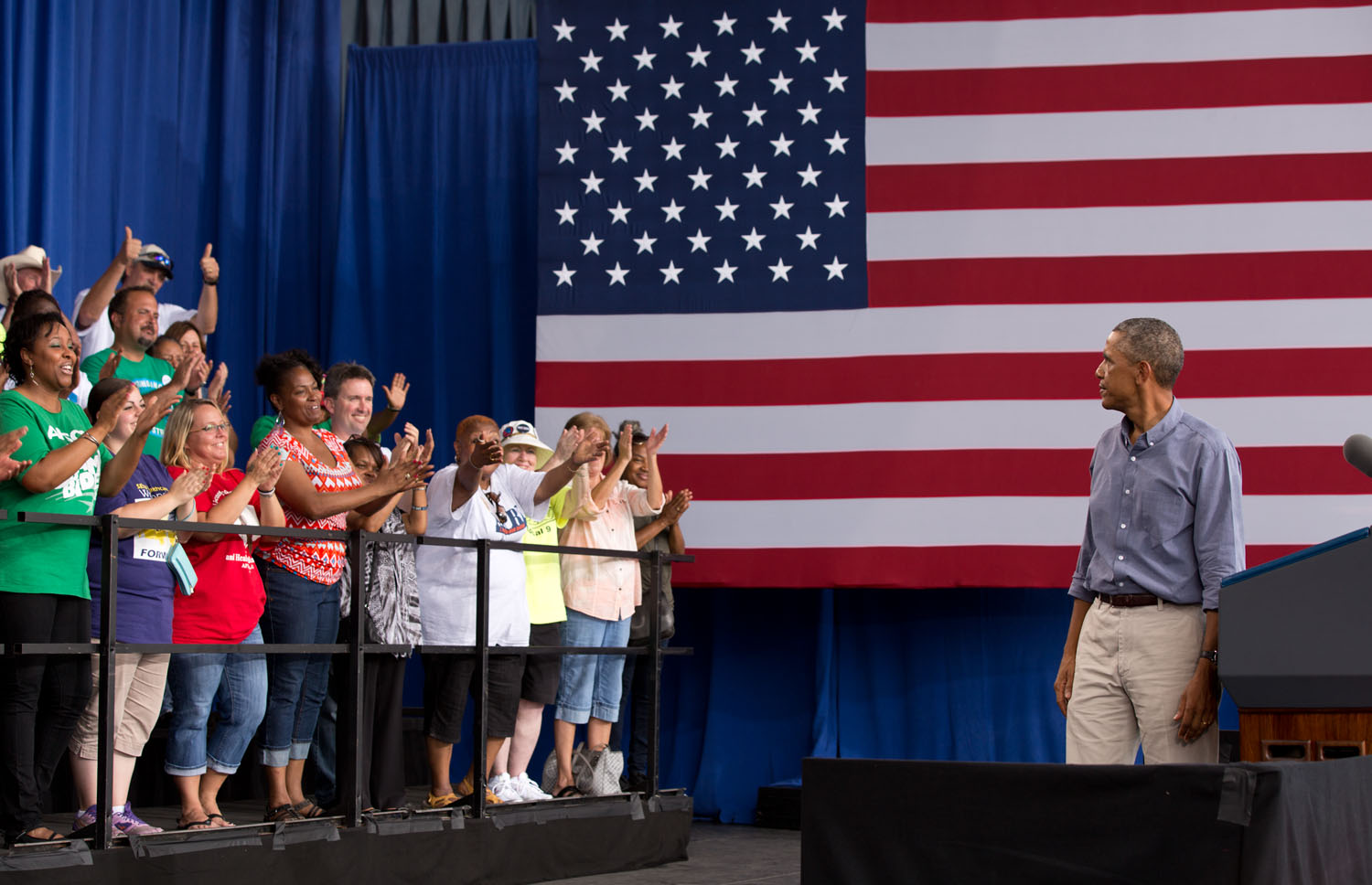 President Barack Obama looks back at the crowd behind him on the stage during remarks at the Milwaukee Laborfest at Henry Maier Festival Park in Milwaukee, Wis., on Labor Day, Sept. 1, 2014. (Official White House Photo by Pete Souza)

President Obama also noted that we could get more done "if we had a Congress that cared about policies that actually helped working people." But until then, he said, "it’s up to us to fight for these policies" -- and noted some of the actions he's taken on his own:

I acted on my own to make sure more women had the protections they needed to fight for fair pay on the workplace -- because I think when women succeed, America succeeds. I was raised by a single mom, so know how hard it is for a lot of women out there. And, by the way, men, you should want your wife to get paid fair. She’s bringing that money home. That’s not a women’s issue, that’s your issue. That’s money out of your family’s pocket.

That’s why I took action on my own to give millions of Americans the chance to cap their student loan payments at 10 percent of their incomes. I don’t want young people saddled with debt when they’re just starting out in life. That’s why I acted on my own to make sure companies that receive federal contracts, that they pay their workers a fair wage of at least $10.10 an hour. If you work full time in America, you shouldn’t be living in poverty, you shouldn’t be trying to support a family in poverty.

And in the year and a half since I first asked Congress to raise the minimum wage -- of course, the Republicans in Congress have blocked it -- but more and more Americans are doing their part to make it happen. This is why I stay optimistic, even with some of the nonsense that goes on in Washington. You’ve seen business leaders at companies like The Gap that raised base wages for tens of thousands of workers because they knew it was good for business. You’ve seen mayors across the country doing their part, and today, on Labor Day, the mayor of Los Angeles is announcing a plan to raise his city’s minimum wage.

"There is no denying a simp​le truth: America deserves a raise."

President Obama also highlighted the important role that unions play in protecting American workers, saying that "if I were looking for a good job that lets me build some security for my family, I’d join a union."

"And if I cared about these things," he said, "I'd also want more Democrats looking out for me ... because when the rest of the country is working to raise wages, but Republicans in Congress won't, it ain't right."

When the rest of the country is working to open up more businesses, but Republicans in Congress block investments that would help more businesses grow, it ain’t right. When unions and CEOs, when law enforcement and the evangelical community, when folks who usually don’t agree on anything agree that we should be fixing our broken immigration system, but the Republicans in the House of Representatives have been sitting on a bill for more than a year, it ain’t right.

The President then explained that we need to continue to fight, and implored the crowd to believe in their own ability to "bring about the change we need."

I'm asking you to believe in you. Because even when our politics just ain’t right, there’s a whole lot that is right with America.

America is not the party we belong to, but the values we share. America is hard work. America is responsibility. America is sacrifice. America is looking out for one another. Let’s embrace some economic patriotism that says we rise or fall together as one nation, as one people.

He also noted that changing the status quo is one of the hardest things to do, and reiterated that people need to get involved, organize, vote -- and stay hopeful:

Cynicism is fashionable these days, but cynicism didn’t put anybody on the moon. Cynicism never won a war, it never cured a disease, it never started a business, it never fed a young mind, it never built a road or a bridge.

Hope, the belief that there are better days ahead; the belief that together, we can build up our middle class and hand down something better to our kids -- that’s what built America. And America’s best days are still ahead. I believe it. You need to believe it, too. Let’s get to work. 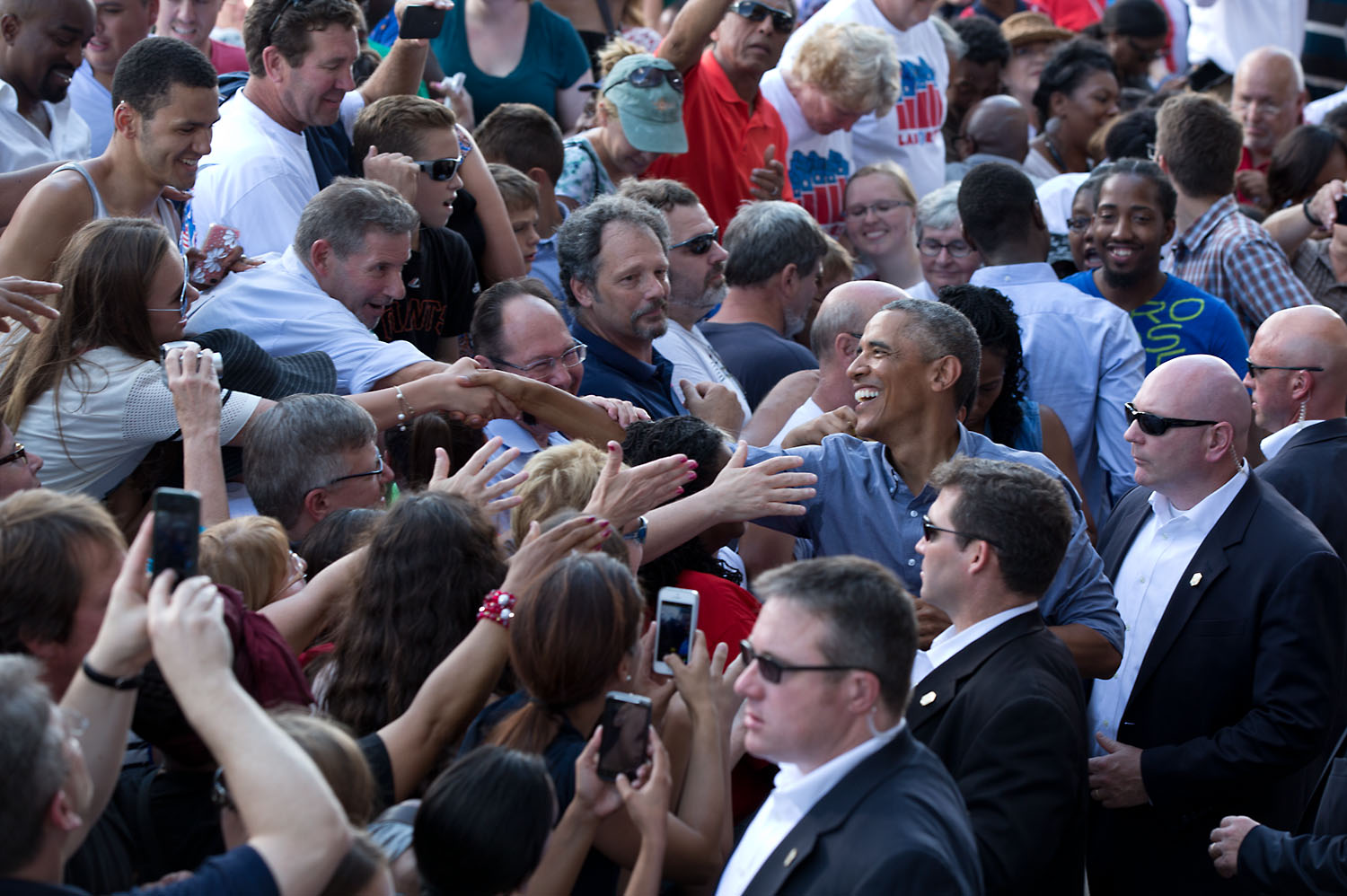