September 3, 2014 at 5:23 PM ET by Jason Furman, Matt Fiedler
Twitter Facebook Email
Summary:
New estimates out from the Office of the Actuary at the Centers for Medicare and Medicaid Services show that national health expenditures rose at historically slow rates in 2013, continuing the exceptionally slow growth in health costs seen in recent years.

New estimates out today from the Office of the Actuary at the Centers for Medicare and Medicaid Services show that national health expenditures rose at historically slow rates in 2013, continuing the exceptionally slow growth in health costs seen in recent years. This slow growth, which is thanks in part to the Affordable Care Act, is already generating major benefits for both the Federal budget and our economy.

The near-term outlook in today’s report is also encouraging. Consistent with recent surveys reporting that millions of Americans gained health insurance coverage over the Affordable Care Act’s initial open enrollment period, the Actuaries project a sharp reduction in the number of uninsured Americans over the next few years due to the new coverage options made available under the Affordable Care Act. Unsurprisingly, the Actuaries predict that this dramatic expansion in coverage and access to care will temporarily increase growth in aggregate health care spending. But, consistent with a variety of incoming data, their projections imply that underlying growth in health care prices and per-enrollee spending – the factors that determine the premiums and cost-sharing that families face – will remain subdued over the next few years.

Over the long term, health expenditure projections are always more uncertain. While the Actuaries project that the recent slowdown will largely dissipate as economic recovery continues, the balance of the evidence implies that much of the recent health care spending slowdown has been driven by structural changes, which suggests that a significant portion may persist. Because of the large size of the nation’s health care sector, if even a modest portion of the recent slowdown continues in the long run, it would have a transformative effect on the Federal budget, families’ budgets, and the economy as a whole. For example, even if as little as one-third continues, then, by 2023, national health expenditures would be $1,200 per person lower than if costs returned to their prior trend. In the years ahead, the Administration will continue its efforts to create a health care delivery system that consistently provides efficient, high-quality care, with the goal of making that transformation a reality.

FIVE KEY POINTS ON TODAY’S REPORT FROM THE CMS ACTUARIES

1. Historically slow growth in national health expenditures continued in 2013. That slow growth, which is thanks in part to cost-saving reforms in the Affordable Care Act, is generating major benefits for the Federal budget and our economy. According to today’s estimates, national health expenditures grew 1.4 percent adjusted for inflation and population in 2013 and 3.6 percent in nominal terms. If this estimate holds, the three years since 2010 will have recorded the three slowest health care spending growth rates since recordkeeping began in 1960, and health care spending as a share of GDP will be essentially unchanged from where it stood in 2009.

While recent slow growth in health care spending reflects a variety of factors, including the 2007-2009 recession and other structural changes in the health care sector, cost-saving reforms included in the Affordable Care Act have also played a role. Notably, the Affordable Care Act reduced excessive payments in the Medicare program and took steps to reform the structure of payment to encourage higher-quality, more efficient care, such as by giving hospitals a financial incentive to reduce readmissions and by creating new “accountable care” payment structures that encourage coordinated care, efforts that are showing promising early results. Recent economic research, discussed in detail in this year’s Economic Report of the President, provides reason to believe that these public-sector reforms may be generating major “spillover” benefits in the private sector as well.

Slower growth in health costs benefits the labor market by slowing the growth of employers’ health benefit costs (recent trends in which are discussed below). In the short run, slower growth in premiums increases employers’ incentives to hire, boosting employment. Over the longer run, economic theory and evidence imply that the money employers save on health benefits are passed on to workers as higher take-home pay.

Recent trends in health costs have also sharply improved the nation’s fiscal outlook. The Congressional Budget Office now estimates that Federal spending on Medicare and Medicaid in 2020 will be $188 billion below what it projected as recently as August 2010. CBO has stated that its recent revisions largely reflect “technical revisions” made to reflect the slowdown in health care costs. The recent dramatic downward revisions in CBO’s health spending projections were highlighted just last week by outside analysts. 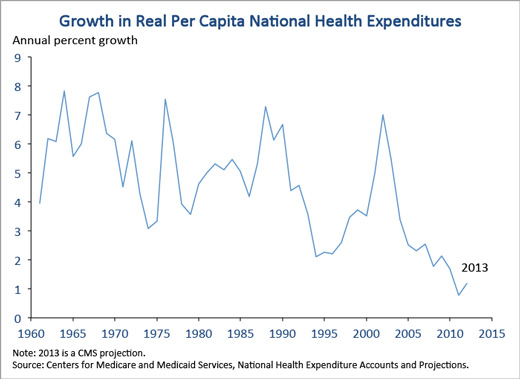 A key goal of expanding health insurance coverage is to ensure that all individuals have access to the health care services they need. Consistent with that, the Actuaries project that the expansion in health insurance coverage will drive a one-time uptick in utilization of health care services among those who gain coverage or gain higher-quality coverage, temporarily increasing the growth rate of aggregate health care spending. Even so, the Actuaries predict that health care spending growth over the next few years will remain well below its long-term historical average.

Most importantly, the temporary uptick in aggregate health care spending growth due to expanded coverage does not imply that the law is increasing costs for people who already had coverage. The premium and cost-sharing amounts that individuals face are driven by underlying trends in health care prices and per-enrollee spending, and the Actuaries projections imply that these underlying trends will remain subdued over the next few years. 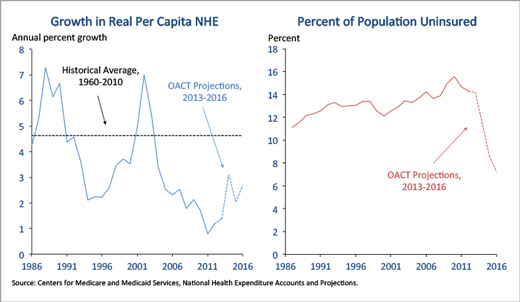 3. Consistent with the Actuaries’ projections, actual data for 2014 show continued slow growth in health care prices and per-enrollee spending, the costs that matter to individuals, even as millions have gained coverage. Actual data on underlying trends in health care costs have remained extremely encouraging so far this year. As of July 2014, health care prices are up just 1.6 percent on a year-over-year basis. This is slightly slower than the 1.8 percent average increase recorded since the Affordable Care Act became law in March 2010, itself the slowest rate of increase over a period of that length in nearly 50 years.

Key measures of total per-enrollee spending, which capture trends in both health care prices and per-enrollee health care utilization, are also growing exceptionally slowly. According to the Congressional Budget Office, nominal Medicare spending was up just 1.6 percent through July 2014 relative to the same period in fiscal year 2013, which about a 3 percent decline in inflation-adjusted, per-beneficiary terms and implies that Medicare spending actually fell as a share of GDP over this period. Sequestration can account for only a portion of that decline and prior to the recent period, Medicare spending per beneficiary had not fallen since 1999. Similarly, data from the Bureau of Labor Statistics Employment Cost Index show that employers’ hourly health benefit costs rose just 1 percent after adjusting for inflation over the year ending in June 2014, near the bottom of the historical range. 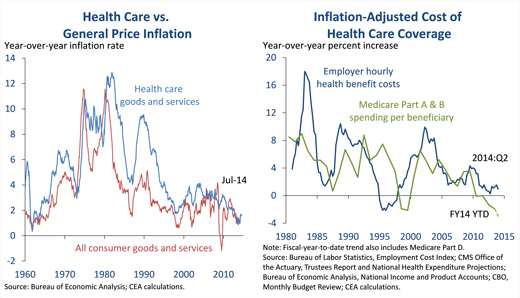 The single strongest piece of evidence that structural changes in the health care sector have played a key role in the slowdown is that Medicare, not just the private sector, has seen very slow growth in health care spending. Because Medicare beneficiaries are generally insulated from labor market developments, it seems unlikely that the recession played a major role in the slowdown in Medicare spending, a view corroborated empirically in research by economists at the Congressional Budget Office. The dramatic slowdown in Medicare spending is thus persuasive evidence that the recession is not the only factor (or even the main factor) behind recent trends in health care costs.

By contrast, the Actuaries focus primarily on the historical correlation between health spending growth and economic growth and attribute the recent slowdown primarily to the aftereffects of the 2007-2009 recession. For this reason, they project that health care spending will accelerate considerably as the effects of the recession fade. But if, in fact, structural factors played the lead role in the slowdown, then those projections significantly overstate the health care spending growth that should be expected in the years ahead. (It is also worth noting that despite attributing the slowdown primarily to the recession, the Actuaries expect health care spending growth to remain below the historical average over the long run, due in significant part to payment reforms in the Affordable Care Act.) 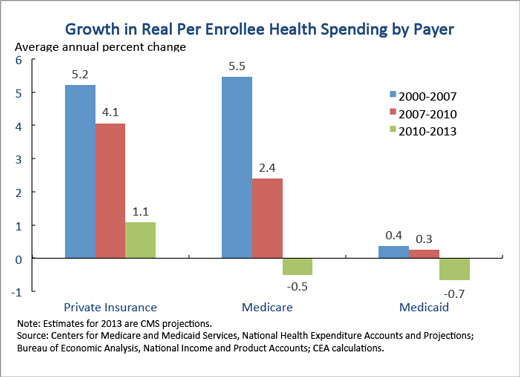 5. While it remains to be seen how much of the recent slowdown will persist, even if as little as one-third continued, then by 2023 national health expenditures would be $1,200 per person lower than if costs returned to their prior trend. While the best evidence implies that the recent slowdown in health care costs is not just an artifact of the 2007-2009 recession, the factors that drive health care spending growth are never known with certainty and thus the precise share of the slowdown that will persist remains unclear. It is, however, illuminating to examine the implications for national health expenditures if even just a modest fraction of the recent slowdown in health care costs persists.

Specifically, CEA has compared a scenario in which annual growth in real per capita national health expenditures returns to the historical rate of 4.0 percent recorded from 2000-2007 to a scenario in which expenditures grow at 3.0 percent, reflecting one-third of the difference between the 4.0 percent historical rate and the 1.1 percent rate recorded from 2010-2013. Because per-person health care spending is large and the slowdown so dramatic, even in this scenario, savings escalate rapidly over time, reaching $1,200 per person (in 2013 dollars) or about $400 billion in total by 2023. These savings would ultimately accrue to Federal and State governments in the form of lower costs for health care programs like Medicare and Medicaid and to families in the form of higher wages and lower out-of-pocket costs. 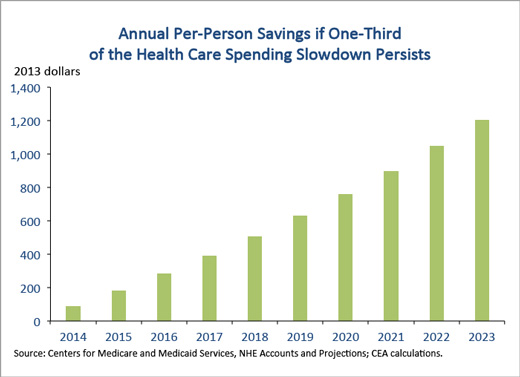