5 Things You Need to Know About Women and the Economy

September 5, 2014 at 3:37 PM ET by Betsey Stevenson
Twitter Facebook Email
Summary:
To further support the economy, and to ensure the workplace works for the 21st century economy, the President is encouraging Congress to act and using his own executive action to support policies that support a fair workplace for all workers -- including women.

Today’s employment report underscores the fact that the economy is continuing to recover, and employment is continuing to increase. Women have shared in these gains, with female employment increasing by 4.1 million jobs in the last 54 months, and the fraction of discouraged workers and workers experiencing long-term unemployment continues to fall. Across industries, women’s employment gains look relatively similar to previous periods of strong employment growth. To further support the economy, and to ensure the workplace works for the 21st century economy, the President is encouraging Congress to act and using his own executive action to support policies that support a fair workplace for all workers -- including women.

Key Points about Women and the Economy

1. Women’s nonfarm employment has increased by 3.8 million jobs over the last 54 months, and 1.2 million in the last 12 months alone. Women’s employment tends to be less cyclical than men’s, largely because women are less likely to work in industries where employment greatly fluctuates with the business cycle. The recent recession followed that pattern, and women lost far fewer jobs than men. Between December 2007 and February 2010 women lost 2.7 million jobs, while men lost 6.1 million. However, the unusual declines in state and local government during the recovery -- a loss of 744,000 jobs between August 2008 and January 2013 were particularly tough for women who lost 65 percent of those jobs. Over the past year state and local government employment has stabilized and begun to recover adding back 123,000 jobs since January 2013. Since February 2010, women and men have recouped 4.1 and 5.9 million private sector jobs, respectively. This has raised the share of private sector workers who are women from 46.9 percent prior to the recession to 47.9 percent this past August. 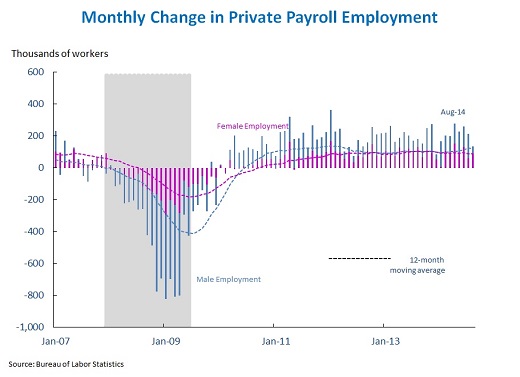 2. Across multiple measures, women’s unemployment has declined. As employment has increased since 2010, the unemployment rate has also fallen. The female unemployment rate currently stands at 6.1 percent, the same as for the population as a whole, down from its peak of 9.0 percent in November 2010. The short-term unemployment rate (the fraction of the labor force unemployed for 26 weeks or less) has fallen to its pre-recession average, and while the long-term unemployment rate remains elevated, it has fallen considerably in the past year after more than quadrupling during the recession and its aftermath. Broader measures of labor force attachment also show a marked improvement. For example, averaging across the past 12 months, 0.4 percent of the female labor force is discouraged from seeking work, down from a high of 0.6 percent in early 2011. The share of people marginally attached to the labor force, or discouraged from working, or unemployed has averaged 8.3 percent this past year on a non-seasonally adjusted basis, down from 10.5 percent in early 2011. 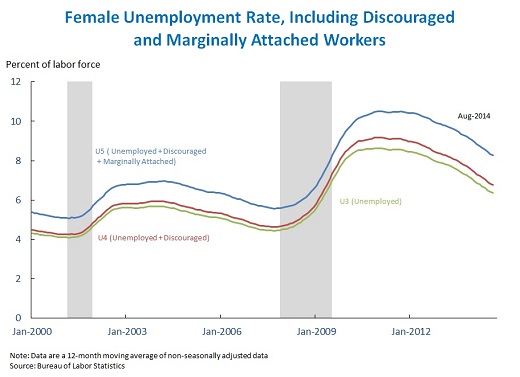 3. In the recovery, women’s job gains have been concentrated in education and health services, professional and business services, and leisure and hospitality. During this recovery, many of the job gains have been similar between men and women, although men have gained more construction and manufacturing jobs, and women have gained more education and health services jobs. However, these patterns are not completely unexpected: women have traditionally held more than three-quarters of education and health services jobs, and about one-eighth of construction and less than one-third of manufacturing jobs. The last time the economy added jobs for 54 consecutive months was from November 1996 to April 2001. In general, women’s employment over the most recent period is similar to the previous period across most industries, although there are some notable differences. For example, compared to the previous period, employment growth has been slightly weaker in financial activities, construction, and information services. In contrast, women have gained some manufacturing jobs, while between 1996 and 2001, female employment in manufacturing fell by approximately 200,000 workers. 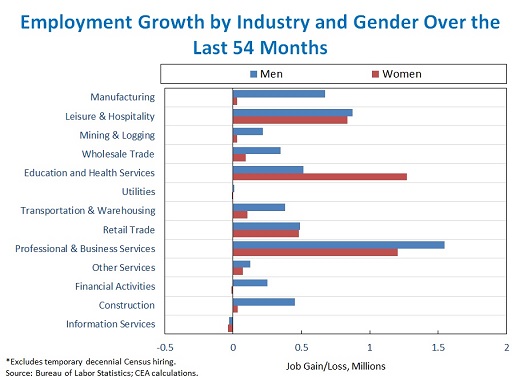 4. This month, women’s employment growth in manufacturing was particularly strong compared to performance since 2010. In other industries, women’s employment was within the range of the previous 54 months. This month’s employment growth was relatively weak in transportation and other services, and mirroring overall trends, women lost about 1,000 jobs in retail trade. Employment growth for women was particularly above average in construction and information services, and on a seasonally-adjusted basis, women gained more manufacturing jobs this month than at time since July 2000. Like the overall labor market, the pattern of female job growth across industries in August was slightly more divergent from recent trends than earlier this year. 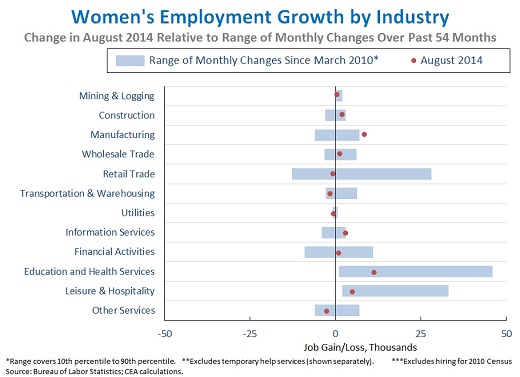 5. Young women are increasingly staying in school, more than off-setting the decline in labor force participation among young women. Fewer young women are neither working nor studying compared to previous generations. Since students, even if they are working part-time, are not considered part of the labor force, only looking at participation rates misses the fact that more and more women are obtaining an undergraduate or graduate education.  Since the mid-1990s, women have accounted for the majority of postsecondary students, meaning that they will account for the majority of our skilled labor force in the future. At the same time that young women are staying in school, however, both men and women are working longer: more than one-third of women 55 and older are working today, compared to less than one-quarter 20 years ago. 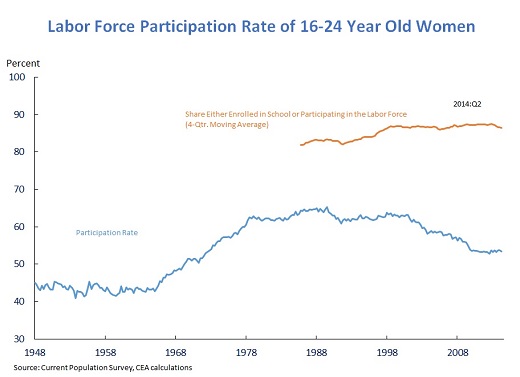