"Even One Case Is Too Many": Vice President Biden Marks the 20th Anniversary of the Violence Against Women Act 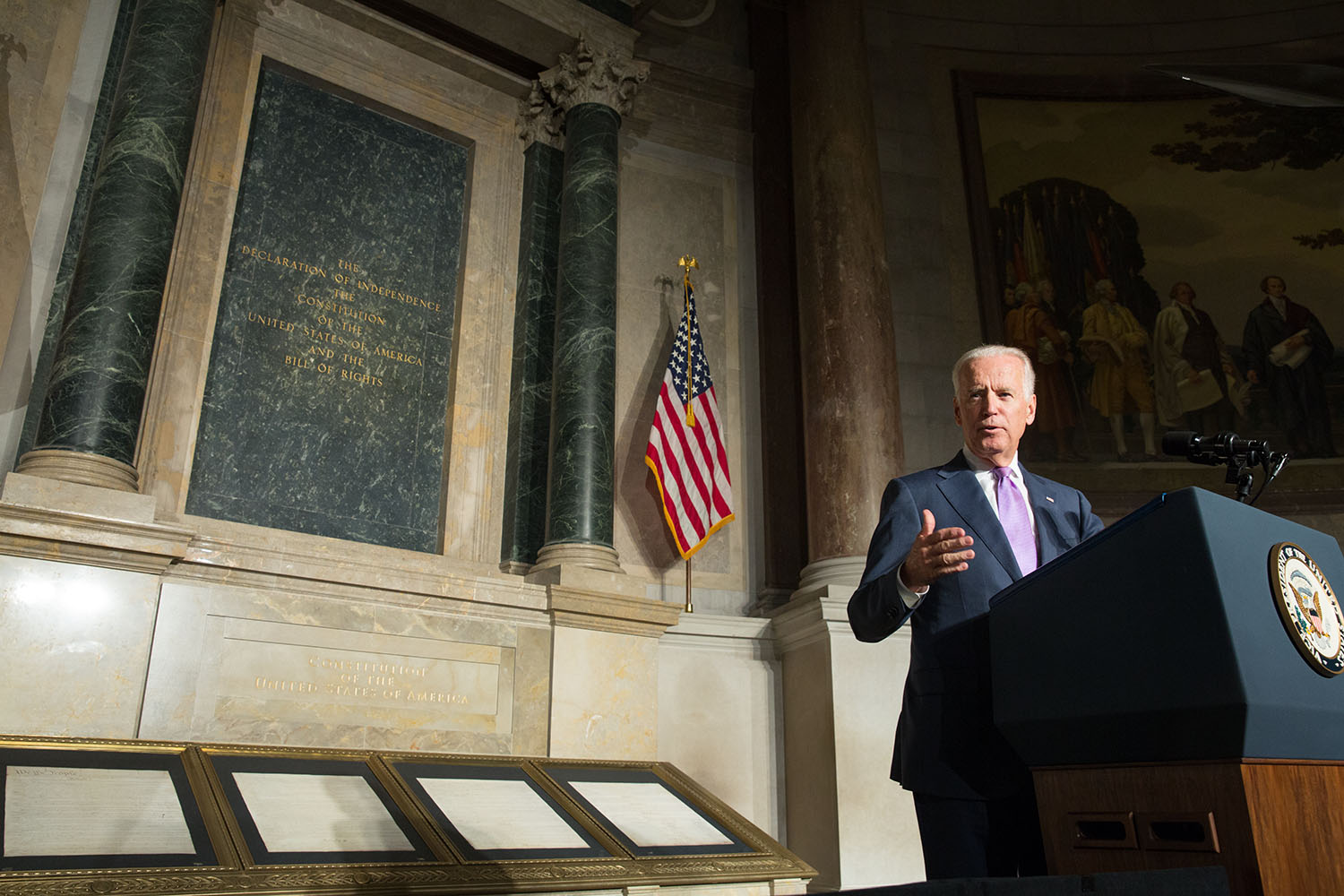 Vice President Joe Biden speaks on the 20th anniversary of the Violence Against Women Act, at the National Archives, in Washington, D.C. September 9, 2014. (Official White House Photo by David Lienemann)

Twenty years ago this week, President Clinton signed into law the Violence Against Women Act (VAWA) -- a landmark law that empowered women and children to expose and prosecute domestic violence. The signing of the law marked the end of an arduous road to pass the legislation and put our society on the path toward effectively combating such heinous abuses. Vice President Joe Biden, then a U.S. Senator, not only authored VAWA, but helped drive it through Congress and deliver it to the President's desk.

Today, standing in front of the U.S. Constitution at the National Archives, Vice President Biden reflected on how far we've come in our ability -- and willingness -- to address domestic violence:

Even just 20 years ago, few people wanted to talk about violence against women as a national epidemic, let alone something to do something about. No one even back then denied that kicking your wife in the stomach, or smashing her in the face, or pushing her down the stairs in public was repugnant. But our society basically turned a blind eye. And hardly anyone ever intervened, directly intervened -- other than my father and a few other people I knew.

"This was the ugliest form of violence that exists," he said, and though many wanted to see these crimes remain hidden in the shadows, the Vice President was committed to bringing them out into the light. "We had to let the nation know," he said, "because I was absolutely convinced -- and remain absolutely convinced -- in the basic decency of the American people, and that if they knew, they would begin to demand change."

"The only way to change this culture was to expose it . . . the best disinfectant is sunlight."

Change could not come soon enough for the victims of domestic violence. Many summoned the courage to share their stories before Congress in order to convey exactly why the nation needed to act:

These were stories of survivors from all walks of life, all parts of the country, North, South, East and West, and Midwest.  One young woman I remember had her head put in the vice on a workbench by her father, crushing her skull, as punishment and abuse. Another who had both her arms broken with a hammer by her husband because she didn't respond quickly enough. Several others had their heads beaten with pipes by the men who professed their great love for them; a 15-year-old girl stabbed by her ex-boyfriend who had just been released from prison for beating her before. So many other cases, a famous journalist whose daughter who was killed after having a stay-away order in the Mid-Atlantic states, and her husband following her to Massachusetts because there was no computer system to be able to know it was done, they let him loose.  And he killed her.

More than anything, as we painted this honest picture of what was going on in America, public opinion began to change.  As more men -- I might add -- and women, but men spoke out, as well, minds began to change.  And the terms of the debate shifted.

Four years after it was first introduced, VAWA finally passed Congress and was signed into law on September 13, 1994.

Since then, VAWA has been reauthorized three times:

"When violence against women is no longer societally accepted, no longer kept secret; when everyone understands that even one case is too many. That’s when it will change."

Though we've come a long way as a society, the Vice President made it clear that much work remains:

We have so much more to do, because there’s still sex bias that remains in the American criminal justice system in dealing with rape -- stereotypes like she deserved it, she wore a short skirt still taint prosecutions for rape and domestic violence. We’re not going to succeed until America embraces the notion -- my father’s notion -- that under no circumstance does a man ever have a right to raise a hand to a woman other than in self-defense -- under no circumstance; that no means no, whether it’s in a bedroom, or on the street, on in the back of a car -- no means no.  Rape is rape -- no exceptions.

Until we reach that point, we are not going to succeed.  But I believe that we can get to that point.  It’s still imperfect, but the change is real that’s happening.

To pursue that progress, the Vice President announced that he will hold a Summit on Civil Rights and Equal Protection for Women in order to expand civil rights remedies in the law -- because, as he said, "You can’t talk about human rights and human dignity without talking about the right of every woman on the planet to be free from violence and free from fear."

It’s a right that flows from the document behind me -- the equal protections clause -- inalienable rights of life, liberty and the pursuit of happiness. And it’s enshrined in every document we pay tribute to. And it’s the right that measures the character of the nation. It’s the single-most significant and direct way to measure the character of a nation -- when violence against women is no longer societally accepted, no longer kept secret; when everyone understands that even one case is too many. That’s when it will change.