President Obama: “We Will Degrade and Ultimately Destroy ISIL”

September 10, 2014 at 10:15 PM ET by David Hudson
Twitter Facebook Email
Summary:
In an address from the State Floor of the White House, President Obama speaks to the nation about ISIL -- and our comprehensive strategy to degrade and ultimately destroy the terrorist group.

In an address from the State Floor of the White House, President Obama spoke to the nation tonight about ISIL -- and our comprehensive strategy to degrade and ultimately destroy the terrorist group.

The President reiterated that as Commander-in-Chief, his “highest priority is the security of the American people,” and noted that we have “consistently taken the fight to terrorists” that threaten the United States:

We took out Osama bin Laden and much of al Qaeda’s leadership in Afghanistan and Pakistan.  We’ve targeted al Qaeda’s affiliate in Yemen, and recently eliminated the top commander of its affiliate in Somalia.  We’ve done so while bringing more than 140,000 American troops home from Iraq, and drawing down our forces in Afghanistan, where our combat mission will end later this year.  Thanks to our military and counterterrorism professionals, America is safer.

“Still,” he said, “we continue to face a terrorist threat.”

We can’t erase every trace of evil from the world, and small groups of killers have the capacity to do great harm.  That was the case before 9/11, and that remains true today.  And that’s why we must remain vigilant as threats emerge.  At this moment, the greatest threats come from the Middle East and North Africa, where radical groups exploit grievances for their own gain.  And one of those groups is ISIL -- which calls itself the “Islamic State.”

ISIL (Islamic State of Iraq and the Levant) was formerly al Qaeda’s affiliate in Iraq, and has since gained territory on both sides of the Iraq-Syrian border by taking advantage of sectarian strife and the Syrian civil war. Although ISIL calls itself the “Islamic State,” the President emphasized that the terrorist group is neither Islamic nor a state.

“ISIL is not ‘Islamic.’ No religion condones the killing of innocents, and the vast majority of ISIL’s victims have been Muslim,” President Obama said. “And ISIL is certainly not a state. ... It is recognized by no government, nor the people it subjugates.”

“ISIL is a terrorist organization, pure and simple.”

Adding that ISIL’s sole vision is the slaughter of anyone and everyone who stands in its way, the President detailed the threat that ISIL poses to Iraq, Syria, and the broader Middle East. And “if left unchecked,” he said, “these terrorists could pose a growing threat beyond that region.”

In a region that has known so much bloodshed, these terrorists are unique in their brutality.  They execute captured prisoners.  They kill children.  They enslave, rape, and force women into marriage.  They threatened a religious minority with genocide.  And in acts of barbarism, they took the lives of two American journalists -- Jim Foley and Steven Sotloff.

So ISIL poses a threat to the people of Iraq and Syria, and the broader Middle East -- including American citizens, personnel and facilities.  If left unchecked, these terrorists could pose a growing threat beyond that region, including to the United States.  While we have not yet detected specific plotting against our homeland, ISIL leaders have threatened America and our allies.  Our Intelligence Community believes that thousands of foreigners -– including Europeans and some Americans –- have joined them in Syria and Iraq.  Trained and battle-hardened, these fighters could try to return to their home countries and carry out deadly attacks.

Noting the concern that many Americans have about these threats, he made clear that the U.S. is “meeting them with strength and resolve.”

“Our objective is clear: We will degrade, and ultimately destroy, ISIL through a comprehensive and sustained counter-terrorism strategy.” 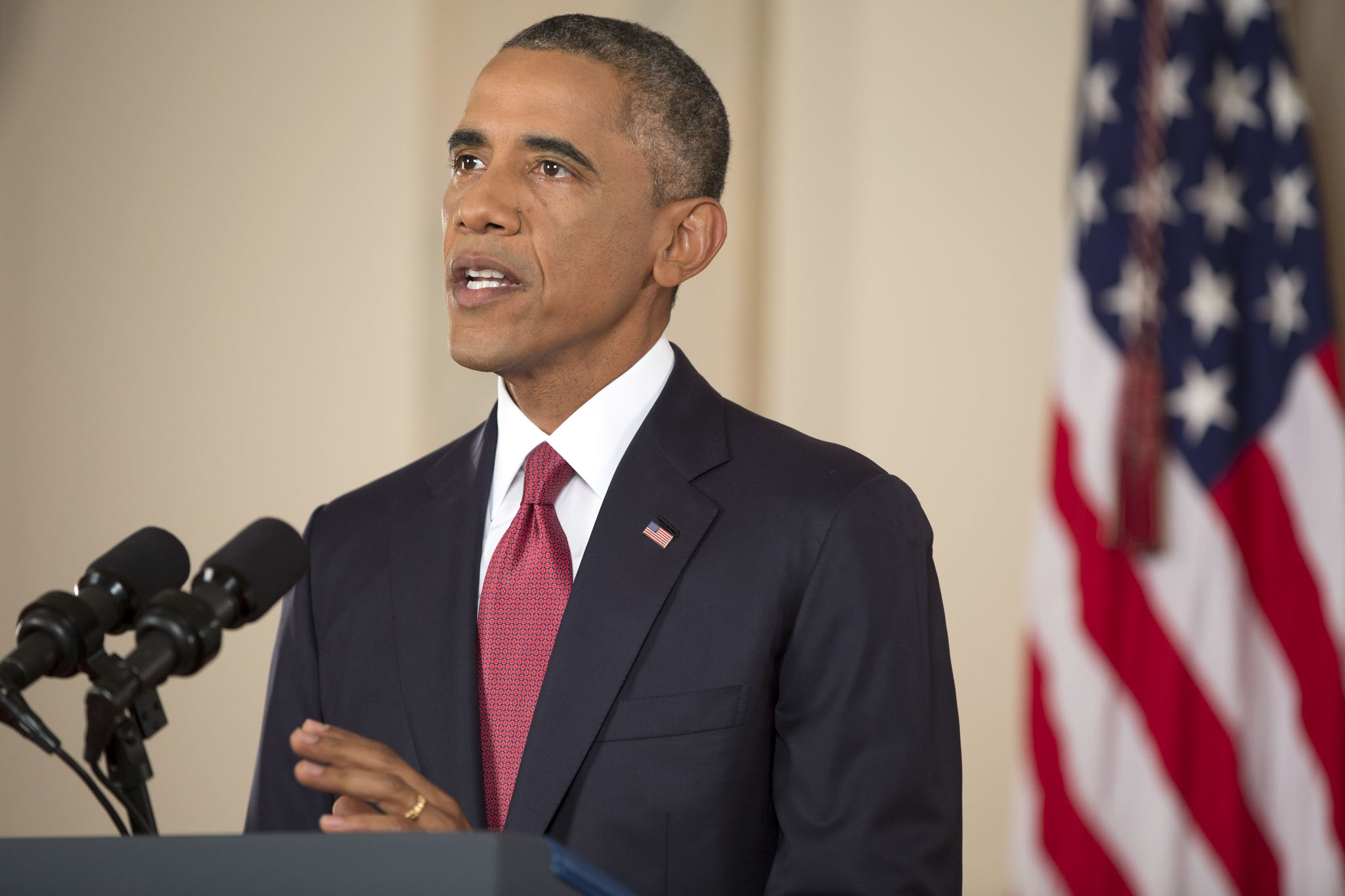 President Barack Obama delivers an address to the nation on the U.S. Counterterrorism strategy to combat ISIL, in the Cross Hall of the White House, Sept. 10, 2014. (Official White House Photo by Pete Souza)

The four parts of the U.S. strategy

In his address, the President outlined the four key parts of the United States’ strategy to defeat ISIL:

Working with the Iraqi government, we will expand our efforts beyond protecting our own people and humanitarian missions, so that we’re hitting ISIL targets as Iraqi forces go on offense.  Moreover, I have made it clear that we will hunt down terrorists who threaten our country, wherever they are.  That means I will not hesitate to take action against ISIL in Syria, as well as Iraq.  This is a core principle of my presidency:  If you threaten America, you will find no safe haven.

In June, I deployed several hundred American servicemembers to Iraq to assess how we can best support Iraqi security forces.  Now that those teams have completed their work –- and Iraq has formed a government –- we will send an additional 475 servicemembers to Iraq.  As I have said before, these American forces will not have a combat mission –- we will not get dragged into another ground war in Iraq.  But they are needed to support Iraqi and Kurdish forces with training, intelligence and equipment.  We’ll also support Iraq’s efforts to stand up National Guard Units to help Sunni communities secure their own freedom from ISIL’s control.

Across the border, in Syria, we have ramped up our military assistance to the Syrian opposition.  Tonight, I call on Congress again to give us additional authorities and resources to train and equip these fighters.  In the fight against ISIL, we cannot rely on an Assad regime that terrorizes its own people -- a regime that will never regain the legitimacy it has lost.  Instead, we must strengthen the opposition as the best counterweight to extremists like ISIL, while pursuing the political solution necessary to solve Syria’s crisis once and for all.

Working with our partners, we will redouble our efforts to cut off its funding; improve our intelligence; strengthen our defenses; counter its warped ideology; and stem the flow of foreign fighters into and out of the Middle East.  And in two weeks, I will chair a meeting of the U.N. Security Council to further mobilize the international community around this effort.

This includes Sunni and Shia Muslims who are at grave risk, as well as tens of thousands of Christians and other religious minorities.  We cannot allow these communities to be driven from their ancient homelands.

“This is our strategy,” the President said, adding that the United States has a “broad coalition of partners” joining us in this effort:

Already, allies are flying planes with us over Iraq; sending arms and assistance to Iraqi security forces and the Syrian opposition; sharing intelligence; and providing billions of dollars in humanitarian aid.  Secretary Kerry was in Iraq today meeting with the new government and supporting their efforts to promote unity.  And in the coming days he will travel across the Middle East and Europe to enlist more partners in this fight, especially Arab nations who can help mobilize Sunni communities in Iraq and Syria, to drive these terrorists from their lands.  This is American leadership at its best:  We stand with people who fight for their own freedom, and we rally other nations on behalf of our common security and common humanity.

President Obama also noted the bipartisan support for this strategy here in the United States, and welcomed congressional support for the strategy “in order to show the world that Americans are united in confronting this danger.” 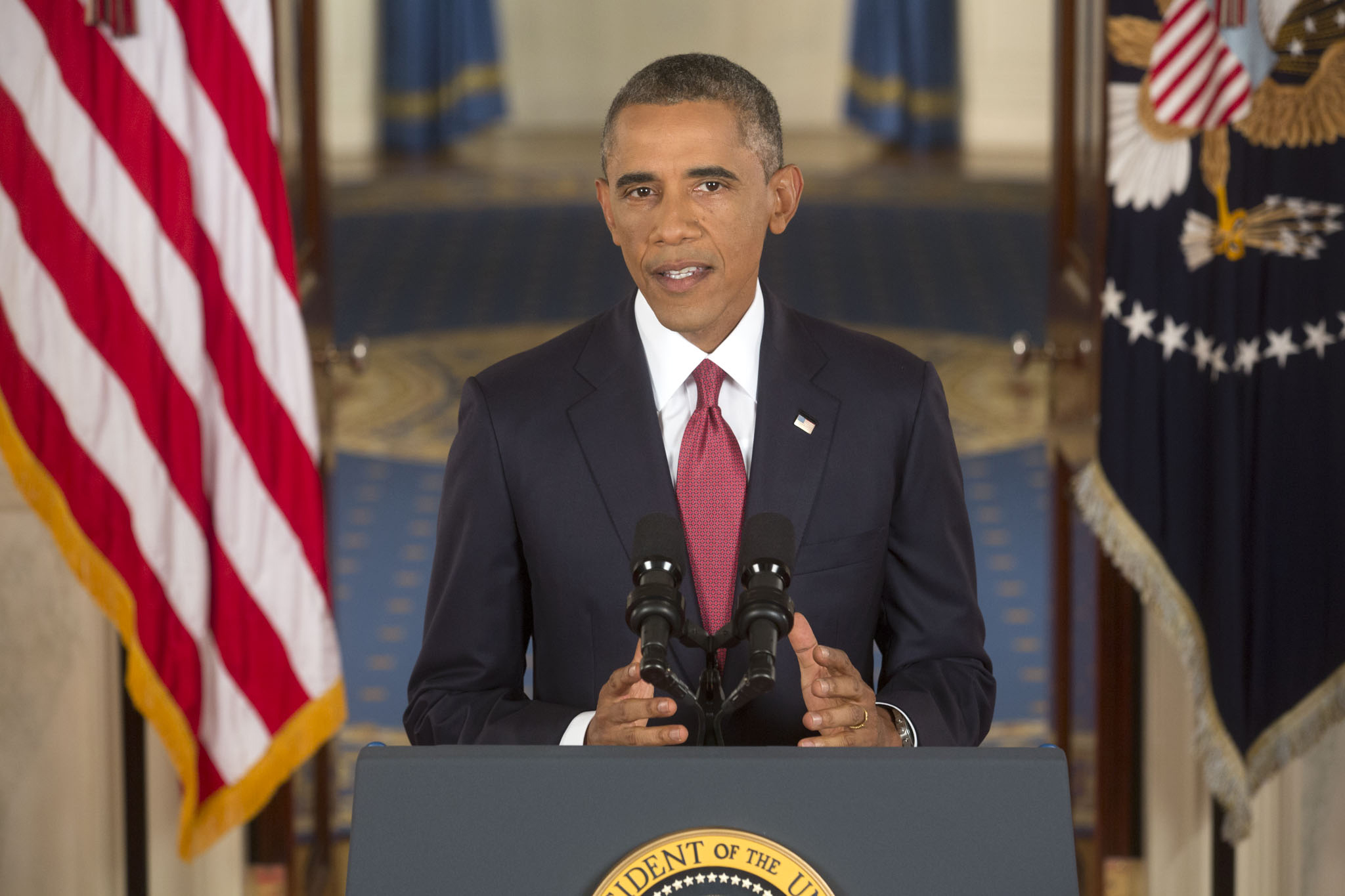 President Barack Obama delivers an address to the nation on the U.S. Counterterrorism strategy to combat ISIL, in the Cross Hall of the White House, Sept. 10, 2014. (Official White House Photo by Chuck Kennedy)

“Different from the wars in Iraq and Afghanistan”

The President made clear that eradicating ISIL won’t happen overnight, but he also detailed how this effort isn’t the same as our previous wars in Iraq and Afghanistan:

Now, it will take time to eradicate a cancer like ISIL.  And any time we take military action, there are risks involved -- especially to the servicemen and women who carry out these missions.  But I want the American people to understand how this effort will be different from the wars in Iraq and Afghanistan.  It will not involve American combat troops fighting on foreign soil.  This counterterrorism campaign will be waged through a steady, relentless effort to take out ISIL wherever they exist, using our air power and our support for partner forces on the ground.  This strategy of taking out terrorists who threaten us, while supporting partners on the front lines, is one that we have successfully pursued in Yemen and Somalia for years.  And it is consistent with the approach I outlined earlier this year:  to use force against anyone who threatens America’s core interests, but to mobilize partners wherever possible to address broader challenges to international order.

President Obama called American leadership the “one constant in an uncertain world.” From fighting terrorism, to rallying the world against Russian aggression, to helping to stop the outbreak of Ebola in West Africa, the U.S. continues to play a critical leading role across the globe:

“Our endless blessings bestow an enduring burden. But as Americans, we welcome our responsibility to lead.”

When we helped prevent the massacre of civilians trapped on a distant mountain, here’s what one of them said:  “We owe our American friends our lives.  Our children will always remember that there was someone who felt our struggle and made a long journey to protect innocent people.”

That is the difference we make in the world.  And our own safety, our own security, depends upon our willingness to do what it takes to defend this nation and uphold the values that we stand for –- timeless ideals that will endure long after those who offer only hate and destruction have been vanquished from the Earth.