DOT's TIGER Is on the Prowl, Solving Transportation Challenges Nationwide

September 12, 2014 at 2:51 PM ET by Secretary Anthony Foxx
Twitter Facebook Email
Summary:
In the sixth round of the TIGER program, the Department of Transportation is making nearly $600 million in grants available and awarding them to 72 transportation projects across 46 states and in D.C. 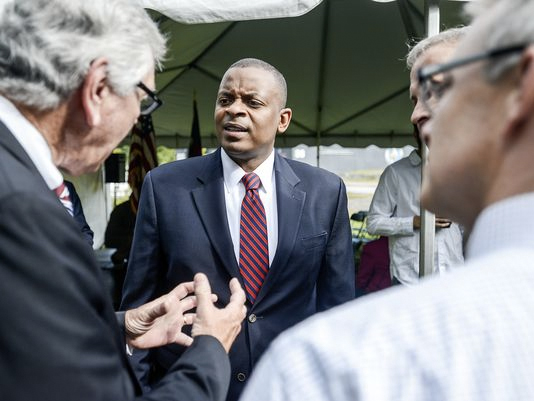 Today, I’m pleased to announce the sixth round of DOT’s TIGER program. We’re making nearly $600 million in grants available, and awarding them to 72 transportation projects across 46 states and in D.C.

Over the last six years, we’ve awarded more than $4 billion in these TIGER grants, but this round of investment is probably the most crucial ever.

Readers of Fast Lane know that we have a huge infrastructure deficit in this country, made worse by Congress’s failure to pass a long-term transportation bill. Americans everywhere are seeing their opportunities limited by this inaction.

People should be able to go to work without wondering whether they’ll get stuck in traffic for hours. And no one should ever have to turn down a job because they can’t get to that job.

Yet these are exactly the issues that many Americans are facing.

That’s why, for this round of TIGER, I asked communities to submit projects that tackle these issues head-on. We said we wanted to see projects that will make people's lives easier and connect them to jobs and other opportunities.

Ruggles Station is one of the projects receiving a TIGER grant this year. It serves the neighborhood of Roxbury in Boston, a community that’s weathered the recession and is ready to bounce back. Over 15.7 million square feet of development is underway near the station, which could create 23,000 jobs.

I say “could” because there’s only one thing standing in the way: transportation.

Right now at Ruggles, capacity is so squeezed -- and so few trains can enter -- that some commuters have to overshoot the station and go to the next stop. Then, they have to double back to find a train that gets them home, adding about 13 minutes to their commute.

In other words, the jobs might be there, but people can’t really get to them.

That's why in this round of TIGER, we’re investing $20 million in Ruggles. We’re going to build a platform that lets more trains -- and more people -- come into the station.

Let me put a finer point on that: By building a 9,600-square-foot platform, we can help generate almost 16 million square feet in new businesses, new classrooms, and new houses.

I think that's a pretty good multiplier, and DOT's TIGER is building stronger communities in this way across America.

We’re investing in cities, yes, but also in rural communities. A quarter of our projects this year are in rural places, including one that will help repair highways and replace 18 bridges in Mississippi. Some of these bridges are so weak that school buses can’t even use them.

And we’re investing $138 million in our freight system, too. This year, for example, Charleston will receive a grant to expand its port and allow bigger ships -- capable of carrying more goods -- to dock. That will help the port maintain its competitiveness at the same time that it helps American businesses get their goods more efficiently to global markets.

Every single one of today's TIGER investments is a story worth telling. But the projects awarded grants today are also reminders of the challenges that remain.

For every dollar in projects we funded, there are $15 in projects we could not. In fact, this year's TIGER acceptance rate was lower than Dartmouth’s. And what that tells us is, TIGER alone is simply not enough. America needs a full investment in transportation.

By one measure, we need $2 trillion in infrastructure spending by 2020. And the only way we’re going to approach that number is if Congress changes the way it funds our transportation.

That's why the Obama administration has put forward the GROW AMERICA Act, a fully funded, four-year, $302 billion proposal. This bill would double TIGER funding to $5 billion over those four years.

The kinds of investments we’re announcing today shouldn't be exceptions; let's work together to make them the rule.