Our Comprehensive Response at the Border, By the Numbers

September 15, 2014 at 4:51 PM ET by Gil Kerlikowske
Twitter Facebook Email
Summary:
Our border has been and remains more secure than it has been in decades. Earlier this year, we saw an influx of Central American migrants including unaccompanied children and adults with children in one isolated area of our border, the Rio Grande Valley in Texas but the Administration took decisive action and the situation is improving.

Our border has been and remains more secure than it has been in decades. Earlier this year, we saw an influx of Central American migrants including unaccompanied children and adults with children in one isolated area of our border, the Rio Grande Valley in Texas but the Administration took decisive action and the situation is improving.

The President and his Administration responded with an aggressive, coordinated Federal response focused on stepped up deterrence, enhanced enforcement, stronger foreign cooperation, and greater capacity for affected Federal agencies to ensure that our border remained secure. As a result, and as Secretary Jeh Johnson reported last week, the number of Central American migrants trying to illegally cross the Southwest border continues to decline including unaccompanied children and families.

This is good news. We are not declaring victory, and we aren’t going to take our foot off the gas; U.S. Customs and Border Protection (CBP) remains prepared. We will remain vigilant and continue to aggressively work to deter future increases and address the influx on both sides of the border with our Central American partners.

The reasons for the decrease in the number of unaccompanied children and adults traveling with children apprehended by CBP cannot be attributed to any one factor.  However, I believe the Administration's response and efforts to work with Central American leaders to publicize the dangers of the journey, to reinforce that apprehended migrants that do not qualify for any humanitarian relief are ultimately safely returned to their home countries in keeping with the law, and the impact of seasonal weather have all played a part. 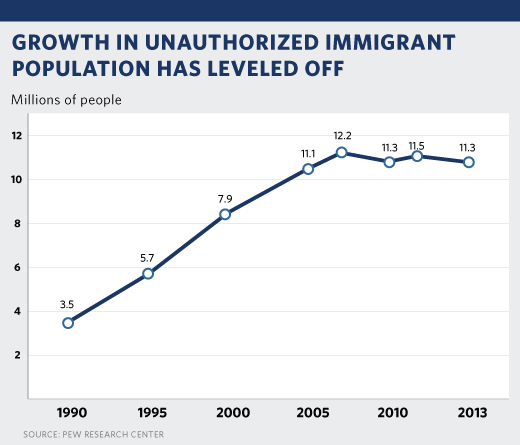 Taken as a whole, the additional manpower, technology and resources provided in the last six years represent the most serious and sustained action to secure our border in our nation’s history. And it is clear from every key measure that this approach is working. As the above chart from a recent Pew Center report shows, after rapid expansion from 1990-2006, the unauthorized immigrant population within the US has leveled off since 2007. The fact that there has been no real growth in unauthorized immigrants over the past six years is a fact that may surprise many.  A number of factors are in play here, but one of the greatest contributors is strong enforcement at the Southwest border.

In addition to increasing law enforcement capacity across the Southwest border, we have also made it more mobile, so that when problems arise, we can move resources to address them more expeditiously. For example, to address the influx this summer, we moved two deployments of additional U.S. Border Patrol agents from around the country to support agents in the Rio Grande Valley Sector. This deployment enhanced efforts to execute joint, targeted enforcement operations in order to disrupt and degrade criminal organizations that are responsible for smuggling illegal immigrants and drugs throughout the South Texas Corridor.

In addition to  enhancing enforcement, we have also made extensive efforts to get the message to families in Central America via CBP’s Dangers Awareness Campaign that the journey north is treacherous and that there are no ‘permisos’ for those crossing the border illegally.  Children, especially, are easy prey for coyotes and transnational criminal organizations and they can be subjected to robbery, violence, sexual assault, sex trafficking and forced labor.

CBP’s Dangers Awareness Campaign, is an aggressive Spanish language outreach effort and an urgent call to action to community groups, that reaches out to parents and relatives of migrants in the U.S. and communities in Central America through radio and print media to save and protect the lives of migrant children attempting to cross the southwest border.  More than 6,700 radio and TV spots aired in Honduras, Guatemala and El Salvador over the summer and 174 media interviews were conducted to include events in McAllen, Laredo, Houston, Los Angeles, New York and Miami.

But unfortunately, we’ve had to do all of this without any help from Congress. After failing to pass an immigration reform bill, in late July Congress refused to authorize additional resources requested by the President to manage this most recent influx while keeping our border secure. And as a result, DHS has had to shift resources away from enforcement activities in lower priority areas to surge resources to the border.  Support for this strategy and the DHS Secretary’s supplemental request -- including efforts to support deterrence efforts-- remains critical to managing this humanitarian situation now and achieving longer-term progress in stemming the flow of Central American migrants in the future.

We continue to work with Congress on comprehensive immigration reform and we remain committed to effective enforcement that prioritizes our national security, border security, and public safety.