A Major Increase in Our Response to the Ebola Outbreak

September 16, 2014 at 7:10 PM ET by David Hudson
Twitter Facebook Email
Summary:
During a visit to the Centers for Disease Control and Prevention (CDC) in Atlanta, President Obama spoke on the Ebola outbreak in West Africa, and announced a major increase in our efforts to help the international community fight the outbreak.

This afternoon, during a visit to the Centers for Disease Control and Prevention (CDC) in Atlanta, President Obama spoke on the Ebola outbreak in West Africa, and announced a major increase in our efforts to help the international community fight the outbreak.

While starting off by reiterating that the chances of an Ebola outbreak happening in the U.S. are extremely low, he made clear that West Africa faces "a very different situation," especially in Liberia, Sierra Leone, and Guinea -- the countries that have been hardest hit by the current outbreak:

[CDC Director Tom Frieden] and others recently returned from the region, and the scenes that they describe are just horrific.  More than 2,400 men, women and children are known to have died -- and we strongly suspect that the actual death toll is higher than that.  Hospitals, clinics and the few treatment centers that do exist have been completely overwhelmed.  An already very weak public health system is near collapse in these countries.  Patients are being turned away, and people are literally dying in the streets.

"Ebola is now an epidemic of the likes that we have not seen before."

It’s spiraling out of control.  It is getting worse.  It’s spreading faster and exponentially.  Today, thousands of people in West Africa are infected.  That number could rapidly grow to tens of thousands.  And if the outbreak is not stopped now, we could be looking at hundreds of thousands of people infected, with profound political and economic and security implications for all of us.  So this is an epidemic that is not just a threat to regional security -- it’s a potential threat to global security if these countries break down, if their economies break down, if people panic.  That has profound effects on all of us, even if we are not directly contracting the disease. 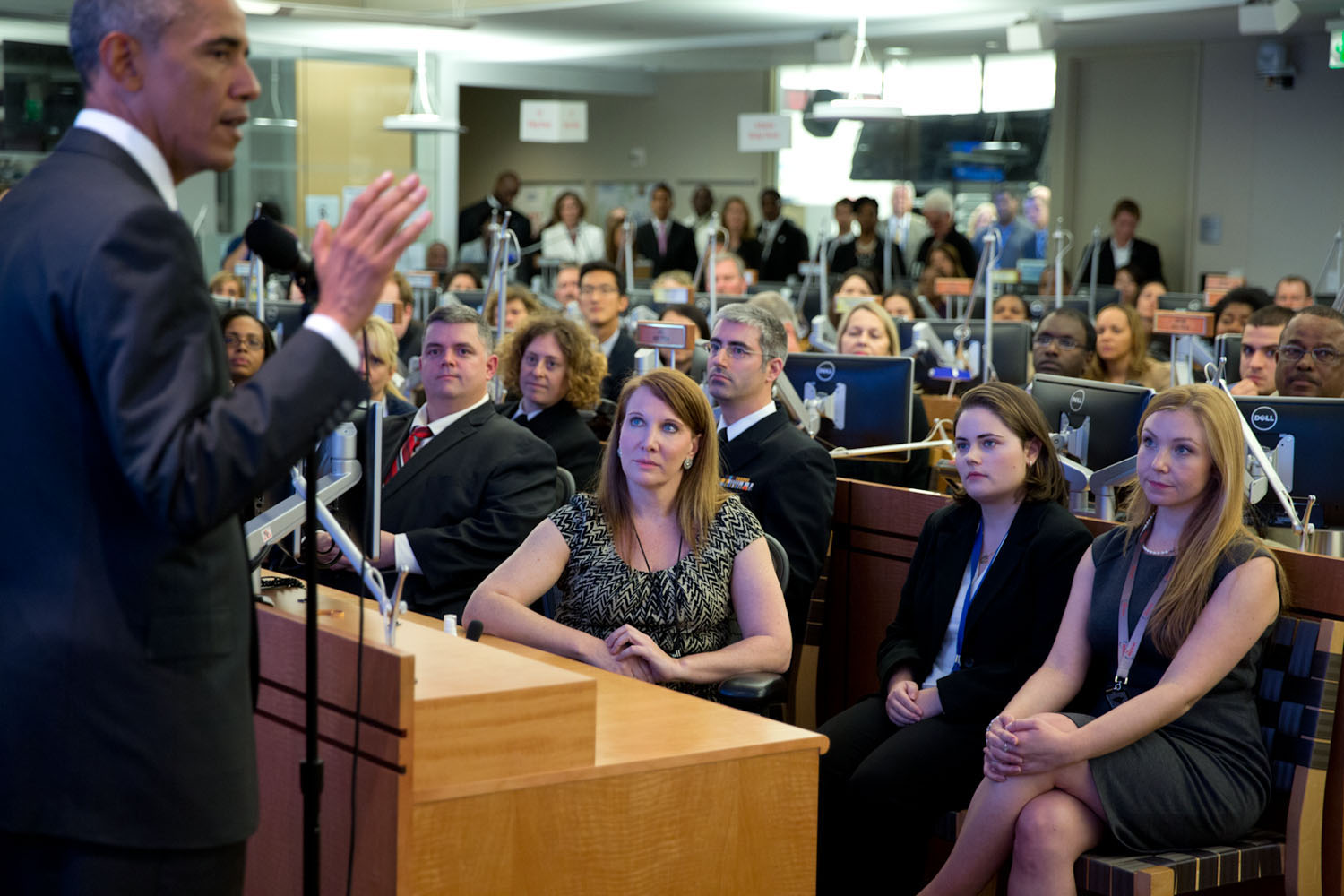 President Obama noted that the outbreak is a national security priority, and that the government has "devoted significant resources in support of our strategy" with four main goals:

The President admitted that this is a daunting task, but emphasized that we know how to fight Ebola:

It’s not a mystery.  We know the science.  We know how to prevent it from spreading.  We know how to care for those who contract it.  We know that if we take the proper steps, we can save lives.  But we have to act fast.  We can’t dawdle on this one.  We have to move with force and make sure that we are catching this as best we can, given that it has already broken out in ways that we had not seen before.

President Obama then went on to detail the specifics of the increase in the U.S. response to the outbreak:

At the request of the Liberian government, we’re going to establish a military command center in Liberia to support civilian efforts across the region -- similar to our response after the Haiti earthquake.  It’s going to be commanded by Major General Darryl Williams, commander of our Army forces in Africa.  He just arrived today and is now on the ground in Liberia.  And our forces are going to bring their expertise in command and control, in logistics, in engineering.  And our Department of Defense is better at that, our Armed Services are better at that than any organization on Earth.

We’re going to create an air bridge to get health workers and medical supplies into West Africa faster.  We’re going to establish a staging area in Senegal to help distribute personnel and aid on the ground more quickly.  We are going to create a new training site to train thousands of health workers so they can effectively and safely care for more patients.  Personnel from the U.S. Public Health Service will deploy to the new field hospitals that we’re setting up in Liberia.  And USAID will join with international partners and local communities in a Community Care Campaign to distribute supplies and information kits to hundreds of thousands of families so they can better protect themselves.

We’re also going to build additional treatment units, including new isolation spaces and more than 1,000 beds.  And in all our efforts, the safety of our personnel will remain a top priority.  Meanwhile, our scientists continue their urgent research in the hope of finding new treatments and perhaps vaccines.  And today I’m calling on Congress to approve the funding that we’ve requested so that we can carry on with all these critical efforts. 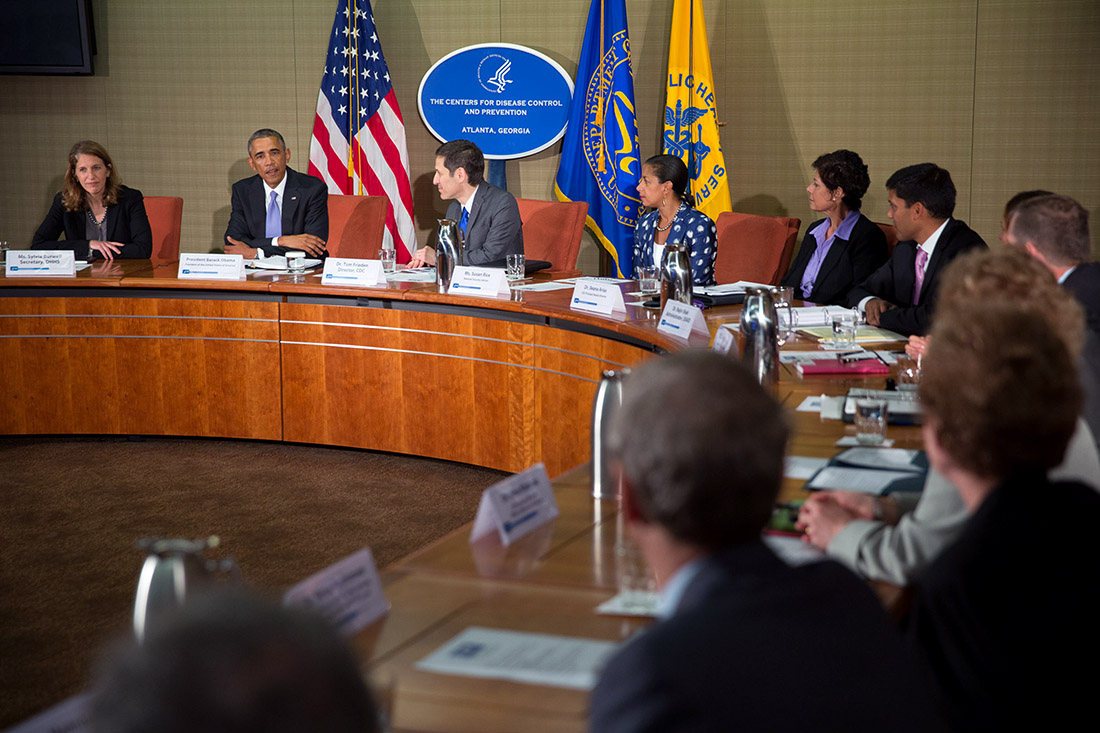 Although the U.S. is doing more to fight the Ebola outbreak, the President also made clear that this is a global threat -- and as such, demands a global response:

International organizations just have to move faster than they have up until this point.  More nations need to contribute experienced personnel, supplies, and funding that’s needed, and they need to deliver on what they pledge quickly.  Charities and individual philanthropists have given generously, and they can make a big difference.  And so we’re not restricting these efforts to governmental organizations; we also need NGOs and private philanthropies to work with us in a coordinated fashion in order to maximize the impact of our response.

This week, the United States will chair an emergency meeting of the U.N. Security Council.  Next week, I’ll join U.N. Secretary General Ban Ki-moon to continue mobilizing the international community around this effort.  And then, at the White House, we’re going to bring more nations together to strengthen our global health security so that we can better prevent, detect and respond to future outbreaks before they become epidemics.

The President ended his remarks by reiterating the gravity of the situation in West Africa, and discussed some of the "absolutely gut-wrenching" scenes and images from the region:

In one account over the weekend, we read about a family in Liberia.  The disease had already killed the father.  The mother was cradling a sick and listless five-year-old son.  Her other son, 10-years-old, was dying, too.  They finally reached a treatment center but they couldn’t get in.  And, said a relative, “We are just sitting.”

"These men and women and children are just sitting, waiting to die, right now. And it doesn’t have to be this way."

While noting that "this epidemic is going to get worse before it gets better," the President emphasized that there is still an opportunity for the world to save countless lives:

Right now, the world has the responsibility to act -- to step up, and to do more.  The United States of America intends to do more.  We are going to keep leading in this effort.  We’re going to do our part, and we’re going to continue to make sure that the world understands the need for them to step alongside us as well in order for us to not just save the lives of families like the one I just discussed, but ultimately, to make sure that this doesn’t have the kinds of spillover effects that become even more difficult to control.