Chart of the Week: The Persistent Gender Pay Gap

September 19, 2014 at 10:45 AM ET by Tanya Somanader
Twitter Facebook Email
Summary:
Take a look at the gender pay gap over the years to the recent progress, and more importantly, just how far we have left to go to achieve equal pay.

In a country founded on the principle of equality, an unfortunate fact remains: Women still do not receive the fair pay that they have earned. This gender pay gap not only flies in the face of our national values -- it undercuts our economic growth and hurts the financial security of families across the country.

Looking back over the last 40 years, the wage gap narrowed from around 60% in the 1970s to above 70% in the 1990s, but progress stalled in the mid-2000s. For much of the last decade, women consistently earned 77% of what their male counterparts earned. But new data released this week shows that in 2013, the female-to-male earnings ratio climbed above 78% for the first time on record.

Take a look at the gender pay gap over the years to the recent progress, and more importantly, just how far we have left to go to achieve equal pay: 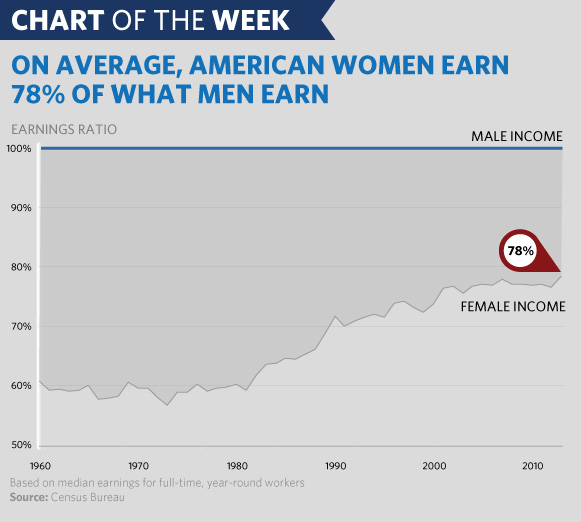 The progress made in 2013 reflected a $817 increase in median earnings for full-time, year-round women workers.

Much work remains to close the gender pay gap for good, and President Obama has made it a top priority. From the Lilly Ledbetter Act -- the first bill he signed into law -- to his Executive Order that protects employees of federal contractors from retaliation for discussing their pay, the President is taking every action he can to help women earn the equal pay they deserve.

He is also calling on Congress to pass the Paycheck Fairness Act -- comprehensive legislation that strengthens the Equal Pay Act of 1963 by giving women the tools they need to learn about wage discrimination and fight for the pay they deserve. Unfortunately, this week, Senate Republicans blocked a vote on the bill for the fourth time, and House Republicans continue to refuse to allow a vote on Paycheck Fairness Act.

The President is willing to work with Congress to help accomplish America’s top priorities, but he will not wait to take action on behalf of the American people. Learn more about what the Obama administration’s Council on Women and Girls is doing to unleash the power of America’s women. Because when women succeed, America succeeds.