What’s a Continuing Resolution and Why Does It Matter?

September 19, 2014 at 5:23 PM ET by Tanya Somanader
Twitter Facebook Email
Summary:
What exactly is a Continuing Resolution and what does this one include? Here’s a few answers to some key questions that many Americans may be asking. 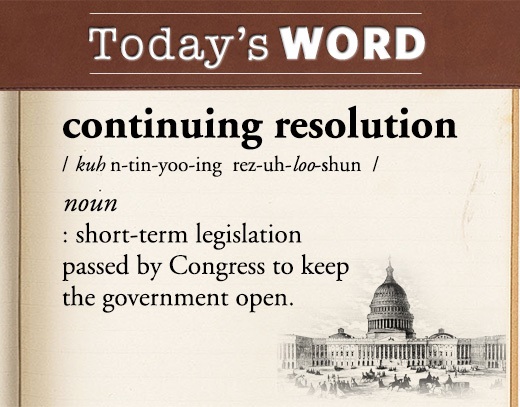 This week, Congress passed and President Obama signed something called a Continuing Resolution, an important measure that ensures our government has the resources necessary to address key domestic and national security goals in the months ahead, including our strategy to degrade and destroy ISIL, and to continue normal government operations without disruption.

The President thanked Congress for their quick action in supporting our efforts: “I believe that we’re strongest as a nation when the President and Congress work together.  And I thank leaders in Congress for the speed and seriousness with which they approached this urgent issue -- in keeping with the bipartisanship that is the hallmark of American foreign policy at its best.”

But what exactly is a Continuing Resolution and what does this one include? Here’s a few answers to some key questions that many Americans may be asking:

Q: So what is a Continuing Resolution?

In our government, the legislative branch holds the power of the purse, which means Congress is responsible for passing legislation to fund the government.  From funding our national defense to investing in job training and public infrastructure to maintaining government operations, Congress decides how to appropriate taxpayer dollars each fiscal year.

Q: Do we need a Continuing Resolution right now?

Yup. The new fiscal year (FY 2015) begins on October 1.  Because Congress has yet to pass any bills to fund government operations, they had to pass a Continuing Resolution to keep the federal government open for business.  This short-term measure expires on December 11.

Q: What would happen if they didn't pass it?

The government would shut down, like it did right around this time last year.  In 2013, the government shut down for 16 days – forcing employees to be furloughed, national parks to close, childcare and other services for military families to shutter, and loans to small businesses to stall. In fact, the last government shutdown cost our government billions of dollars in lost productivity and revenue.

Q: Yikes. Did Congress pass a Continuing Resolution this time?

Yes. This week, the House and the Senate passed a CR that funds the government based on FY 2014 appropriations levels.

That’s an important question. The CR basically continues to fund everything we’ve been funding in the last year. However, President Obama asked Congress to include key provisions that are necessary to address our nation’s top security priorities. Here are the important issues that the CR addresses:

Along with these security priorities, the CR also extends the charter of the U.S. Export-Import Bank, an organization that creates American jobs by helping to take American businesses global. The Bank’s charter was set to expire on October 1, 2014, but the CR has renewed its charter through June 30, 2015.

While the short-term extension protects thousands of businesses -- large and small -- from taking an unnecessary financial hit, a long-term renewal would be the best way to provide much-needed certainty to job-creators that export American-made products and services.

Q: But this is not a budget for the whole year?

No, it’s not. It’s a temporary funding measure that will last until December 11. At that point, Congress will try again to reach a budget agreement that will fund the government for the remainder of FY2015.

Q: Does the President have a say in what goes into the federal budget?

Yes he does! President Obama submitted a budget to Congress that provides a roadmap for accelerating economic growth, expanding opportunity for all Americans, and ensuring fiscal responsibility. His budget shows the choices he would make within the spending levels that Congress agreed to in the Bipartisan Budget Act.

Want to dive into the specifics of how the President would strengthen our economy and continue to bring down the deficit? Watch Brian Deese, Deputy Director of the Office of Management and Budget, break down the budget -- then share it with everyone who should see it: