The President's Statement on Today's Treasury Department Action on Inversions

Today, the Treasury Department announced that it's taking action to reduce the tax benefits of -- and, where possible, stop -- corporate tax inversions from happening.

What's an inversion again? In short, it's a type of corporate tax deal wherein a U.S.-based multinational with operations in other countries moves the tax residence of the parent company overseas -- moving into a low-tax jurisdiction to avoid paying U.S. taxes. (Want more details? We break it down pretty thoroughly in this post.) 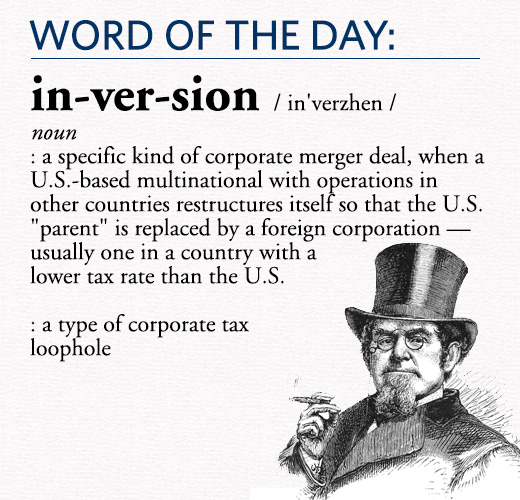 The President issued the following statement today about the Treasury's action.

America’s businesses have created 10 million jobs over the last 54 months -- the longest stretch of uninterrupted private sector job growth in our nation’s history -- and we should do everything we can as a country to build on that progress. That’s why I’ve called on Congress to lower our corporate tax rate, close wasteful loopholes, and simplify the tax code for everyone.

While there’s no substitute for Congressional action, my Administration will act wherever we can to protect the progress the American people have worked so hard to bring about. As part of this effort, Secretary Lew briefed me today on the first steps the Treasury Department is taking to discourage companies from taking advantage of corporate inversions -- moving their tax residence overseas on paper to avoid paying their fair share in taxes here at home.

We’ve recently seen a few large corporations announce plans to exploit this loophole, undercutting businesses that act responsibly and leaving the middle class to pay the bill, and I’m glad that Secretary Lew is exploring additional actions to help reverse this trend.

I believe America does better when hard work pays off, responsibility is rewarded, and everyone plays by the same set of rules. In the weeks and months ahead we should do even more to bring fairness to our tax code, help our businesses create more American jobs, and expand opportunity for all.