President Obama: "No Nation Is Immune" to Climate Change 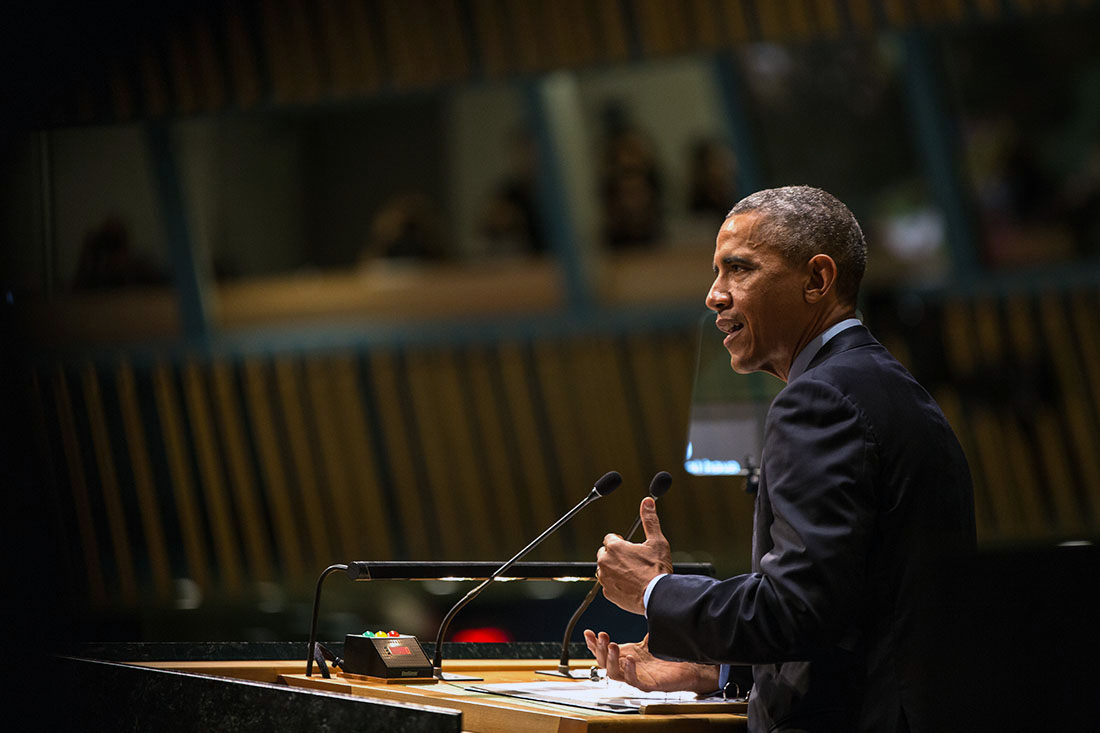 "For all the immediate challenges that we gather to address this week -- terrorism, instability, inequality, disease -- there’s one issue that will define the contours of this century more dramatically than any other, and that is the urgent and growing threat of a changing climate."

Those were President Obama's words at today's U.N. Climate Summit -- a meeting of world leaders that showcased climate action commitments from governments, local leaders, and the private sector. In his remarks, the President detailed the ambitious clean energy investments and carbon emission reductions the U.S. has made, but made clear that all of the world's major economies also need to step up in order to protect our planet.

In America, the past decade has been our hottest on record.  Along our eastern coast, the city of Miami now floods at high tide.  In our west, wildfire season now stretches most of the year.  In our heartland, farms have been parched by the worst drought in generations, and drenched by the wettest spring in our history.  A hurricane left parts of [New York City] dark and underwater.  And some nations already live with far worse.  Worldwide, this summer was the hottest ever recorded -- with global carbon emissions still on the rise.

This past Sunday, nearly 400,000 people marched in New York to show support for action on climate change, and similar events were held on the same day in more than 160 countries worldwide. President Obama noted that as "our citizens keep marching ... we cannot pretend we do not hear them."

We have to answer the call.  We know what we have to do to avoid irreparable harm.  We have to cut carbon pollution in our own countries to prevent the worst effects of climate change.  We have to adapt to the impacts that, unfortunately, we can no longer avoid.  And we have to work together as a global community to tackle this global threat before it is too late.

"We cannot condemn our children, and their children, to a future that is beyond their capacity to repair."

Reiterating that there are actions we can take to address the effects of climate change, President Obama discussed some of the investments and emissions reductions that the U.S. has made so far:

We now harness three times as much electricity from the wind and 10 times as much from the sun as we did when I came into office.  Within a decade, our cars will go twice as far on a gallon of gas, and already, every major automaker offers electric vehicles. We’ve made unprecedented investments to cut energy waste in our homes and our buildings and our appliances, all of which will save consumers billions of dollars.  And we are committed to helping communities build climate-resilient infrastructure.

So, all told, these advances have helped create jobs, grow our economy, and drive our carbon pollution to its lowest levels in nearly two decades -- proving that there does not have to be a conflict between a sound environment and strong economic growth.

Over the past eight years, the United States has reduced our total carbon pollution by more than any other nation on Earth.  But we have to do more.  Last year, I issued America’s first Climate Action Plan to double down on our efforts.  Under that plan, my administration is working with states and utilities to set first-ever standards to cut the amount of carbon pollution our power plants can dump into the air.  And when completed, this will mark the single most important and significant step the United States has ever taken to reduce our carbon emissions.

Last week alone, we announced an array of new actions in renewable energy and energy efficiency that will save consumers more than $10 billion on their energy bills and cut carbon pollution by nearly 300 million metric tons through 2030.  That's the equivalent of taking more than 60 million cars off the road for one year.

I also convened a group of private sector leaders who’ve agreed to do their part to slash consumption of dangerous greenhouse gases known as HFCs -- slash them 80 percent by 2050. 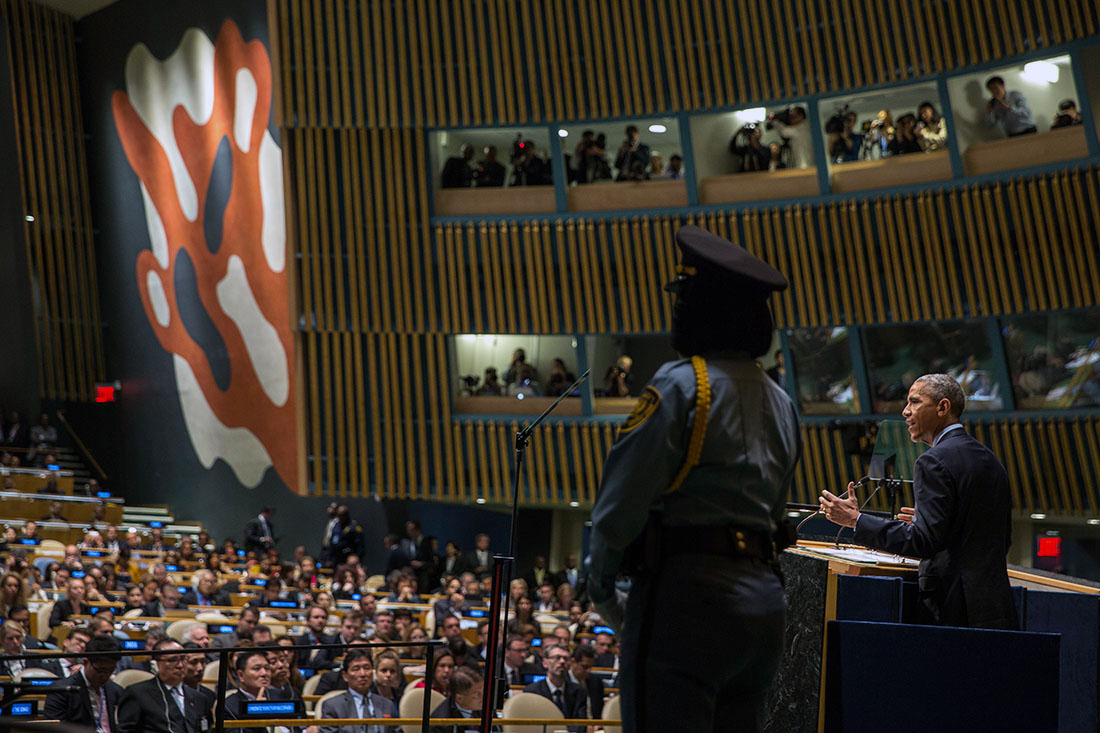 The President called on all countries to join in the fight against climate change, noting that "no nation can meet this global threat alone." He also outlined some of the ways that the U.S. has engaged allies and partners to cut carbon pollution and prepare for the unavoidable impacts of climate change:

We’re partnering with African entrepreneurs to launch clean energy projects.  We’re helping farmers practice climate-smart agriculture and plant more durable crops.  We’re building international coalitions to drive action, from reducing methane emissions from pipelines to launching a free trade agreement for environmental goods.  And we have been working shoulder-to-shoulder with many of you to make the Green Climate Fund a reality.

"Yes, this is hard. But there should be no question that the United States of America is stepping up to the plate."

President Obama is also directing U.S. federal agencies to factor climate resilience into our international development programs and investments, and today announced "a new effort to deploy the unique scientific and technological capabilities of the United States, from climate data to early-warning systems."

We recognize our role in creating this problem; we embrace our responsibility to combat it.  We will do our part, and we will help developing nations do theirs.  But we can only succeed in combating climate change if we are joined in this effort by every nation –- developed and developing alike.  Nobody gets a pass.

The emerging economies that have experienced some of the most dynamic growth in recent years have also emitted rising levels of carbon pollution.  It is those emerging economies that are likely to produce more and more carbon emissions in the years to come.  So nobody can stand on the sidelines on this issues.  We have to set aside the old divides.  We have to raise our collective ambition, each of us doing what we can to confront this global challenge.

Quoting Dr. Martin Luther King, Jr., President Obama said that he believes "there is such a thing as being too late" -- and reiterated the need for us to "move toward a global compact to confront a changing climate" while we are still able to do so:

This challenge demands our ambition.  Our children deserve such ambition.  And if we act now, if we can look beyond the swarm of current events and some of the economic challenges and political challenges involved, if we place the air that our children will breathe and the food that they will eat and the hopes and dreams of all posterity above our own short-term interests, we may not be too late for them.

While you and I may not live to see all the fruits of our labor, we can act to see that the century ahead is marked not by conflict, but by cooperation; not by human suffering, but by human progress; and that the world we leave to our children, and our children’s children, will be cleaner and healthier, and more prosperous and secure.