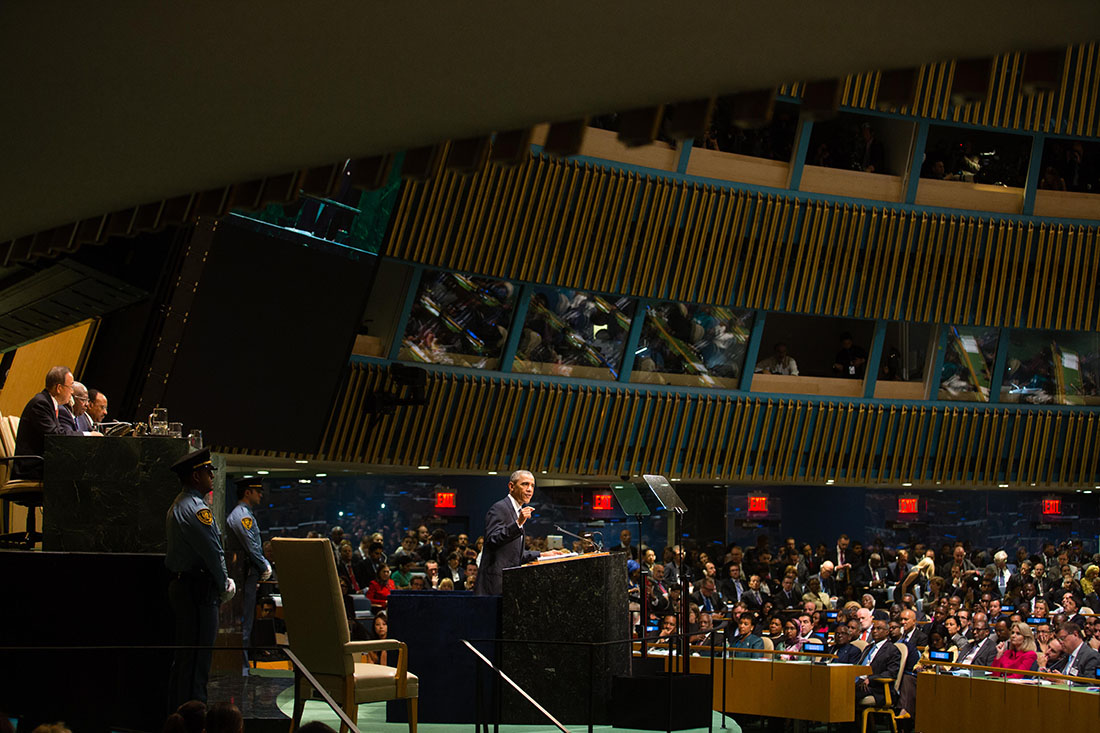 "We choose hope over fear. We see the future not as something out of our control, but as something we can shape for the better through concerted and collective effort. We reject fatalism or cynicism when it comes to human affairs; we choose to work for the world as it should be, as our children deserve it to be."

“There is a pervasive unease in the world,” President Obama said as he stood before the United Nations General Assembly today. “A sense that the very forces that have brought us together have created new dangers and made it difficult for any single nation to insulate itself from global forces.”

From the Ebola outbreak in parts of West Africa, to Russian aggression in Ukraine, to the senseless brutality of ISIL terrorists threatening innocent lives, there are problems that demand the urgent attention of the international community. There’s much to be done to meet the test of the moment, a test that only the United Nations -- an international community working together -- can choose to overcome.

At the heart of that test – at the root of the world’s challenges -- are two defining questions: Can the U.N. renew the purpose of its founding, and will the international community come together to reject the cancer of violent extremism? 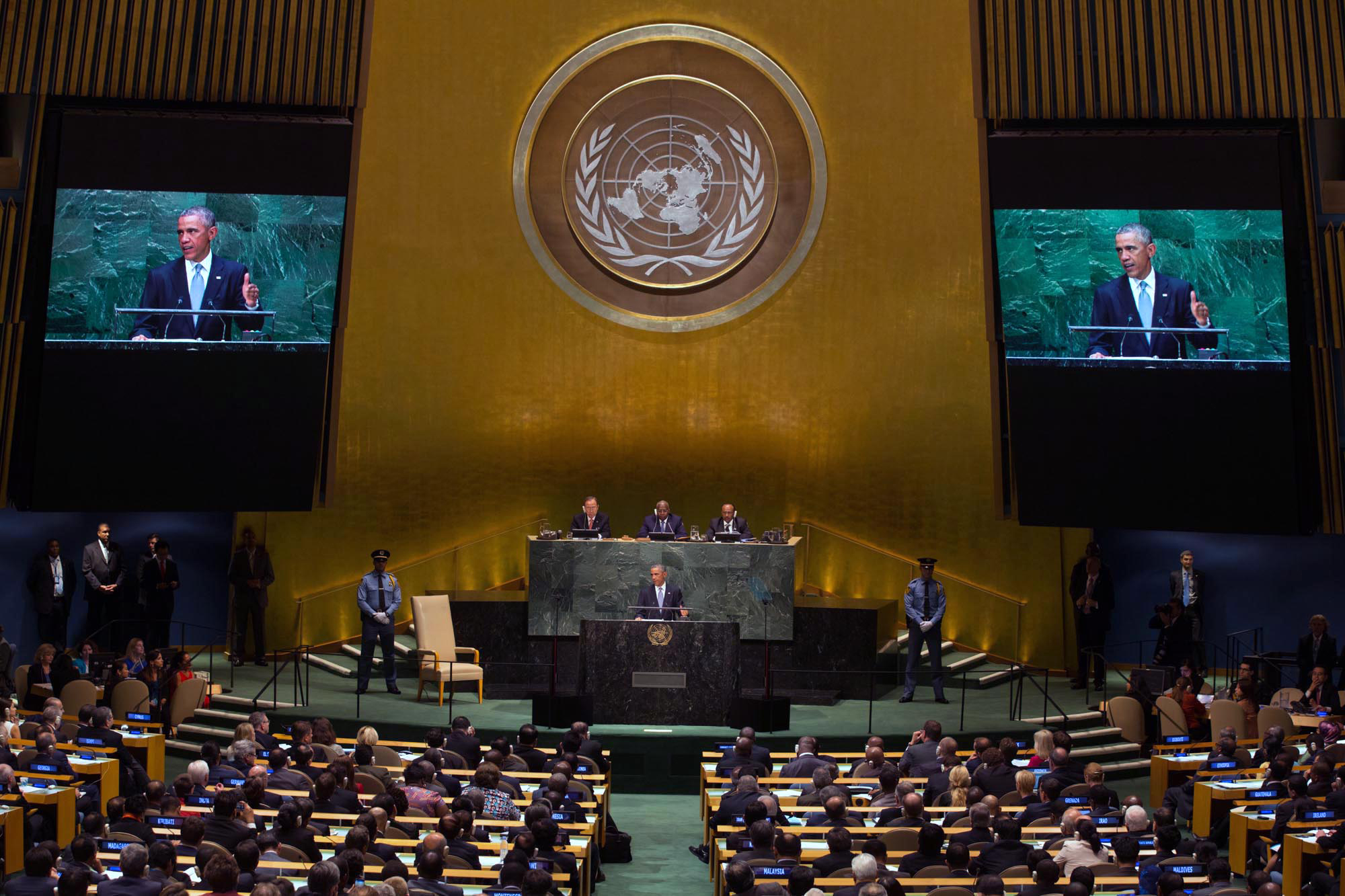 "We Gain More from Cooperation than Conquest"

The United Nations was founded by 51 countries in 1945 after World War II. In a world still reeling from the territorial aggression of warring nations, the U.N. committed to maintaining international peace and security, developing better relations among nations, and promoting social progress, living standards, and universal human rights for all mankind.

Today, Russia’s actions in Ukraine are putting that core mission, and the international order created from it, at risk. The President laid out the facts:

After the people of Ukraine mobilized popular protests and calls for reform, their corrupt president fled. Against the will of the government in Kyiv, Crimea was annexed. Russia poured arms into eastern Ukraine, fueling violent separatists and a conflict that has killed thousands. When a civilian airliner was shot down from areas that these proxies controlled, they refused to allow access to the crash for days. When Ukraine started to reassert control over its territory, Russia gave up the pretense of merely supporting the separatists, and moved troops across the border.

This is a vision of the world in which might makes right -- a world in which one nation’s borders can be redrawn by another, and civilized people are not allowed to recover the remains of their loved ones because of the truth that might be revealed. America stands for something different. We believe that right makes might -- that bigger nations should not be able to bully smaller ones, and that people should be able to choose their own future.

President Obama made it clear that America and our allies will support the people of Ukraine and uphold our commitment to collective self-defense. However, he also made clear that “a different path is available” to Russia -- one of diplomacy and peace that the U.N. is designed to uphold:

The recent cease-fire agreement in Ukraine offers an opening to achieve those objectives. If Russia takes that path -- a path that for stretches of the post-Cold War period resulted in prosperity for the Russian people -- then we will lift our sanctions and welcome Russia’s role in addressing common challenges. After all, that’s what the United States and Russia have been able to do in past years -- from reducing our nuclear stockpiles to meeting our obligations under the Nuclear Nonproliferation Treaty, to cooperating to remove and destroy Syria’s declared chemical weapons. And that’s the kind of cooperation we are prepared to pursue again -- if Russia changes course.

"This speaks to a central question of our global age: whether we will solve our problems together, in a spirit of mutual interests and mutual respect, or whether we descend into the destructive rivalries of the past."

"A Nightmarish Vision that Would Divide the World"

Terrorism is not a new weapon, but in the 21st century, the President described how we face “a more lethal and ideological brand of terrorists” who have perverted the religion of Islam into “a nightmarish vision that would divide the world into adherents and infidels.” That is not what Islam teaches, he noted. Islam is a religion that teaches peace, and Muslims in America and across the world aspire to live with dignity and a sense of justice.

“So we reject any suggestion of a clash of civilizations,” the President said:

Belief in permanent religious war is the misguided refuge of extremists who cannot build or create anything, and therefore peddle only fanaticism and hate. And it is no exaggeration to say that humanity’s future depends on us uniting against those who would divide us along fault lines of tribe or sect; race or religion.

But this is not simply a matter of words. Collectively, we must take concrete steps to address the danger posed by religiously motivated fanatics, and the trends that fuel their recruitment.

President Obama called on the international community to join the U.S. in meeting this challenge by:

This group has terrorized all who they come across in Iraq and Syria. Mothers, sisters, daughters have been subjected to rape as a weapon of war. Innocent children have been gunned down.  Bodies have been dumped in mass graves. Religious minorities have been starved to death.  In the most horrific crimes imaginable, innocent human beings have been beheaded, with videos of the atrocity distributed to shock the conscience of the world.

No God condones this terror. No grievance justifies these actions. There can be no reasoning -- no negotiation -- with this brand of evil. The only language understood by killers like this is the language of force. So the United States of America will work with a broad coalition to dismantle this network of death.

2. Bringing the world, especially Muslim communities, together to explicitly, forcefully, and consistently reject the ideology of terrorists, in part by committing to a new set of principles to reject intolerance and extremism in the education of our children

It is time for a new compact among the civilized peoples of this world to eradicate war at its most fundamental source, and that is the corruption of young minds by violent ideology.

That means cutting off the funding that fuels this hate.  It’s time to end the hypocrisy of those who accumulate wealth through the global economy and then siphon funds to those who teach children to tear it down.

That means contesting the space that terrorists occupy, including the Internet and social media. Their propaganda has coerced young people to travel abroad to fight their wars, and turned students -- young people full of potential -- into suicide bombers.  We must offer an alternative vision.

That means bringing people of different faiths together. All religions have been attacked by extremists from within at some point, and all people of faith have a responsibility to lift up the value at the heart of all great religions: Do unto thy neighbor as you would have done unto yourself.

3. Addressing the cycle of conflict that creates the conditions terrorists prey upon

It is time that political, civic and religious leaders reject sectarian strife. So let’s be clear: This is a fight that no one is winning.  A brutal civil war in Syria has already killed nearly 200,000 people, displaced millions. Iraq has come perilously close to plunging back into the abyss. The conflict has created a fertile recruiting ground for terrorists who inevitably export this violence.

4. Ensuring that Arab and Muslim countries focus on the extraordinary potential of their people -- a chance that is possible and doesn’t need to come at the expense of tradition

The task of rejecting sectarianism and rejecting extremism is a generational task -- and a task for the people of the Middle East themselves. No external power can bring about a transformation of hearts and minds. But America will be a respectful and constructive partner. We will neither tolerate terrorist safe havens, nor act as an occupying power. We will take action against threats to our security and our allies, while building an architecture of counterterrorism cooperation. We will increase efforts to lift up those who counter extremist ideologies and who seek to resolve sectarian conflict. And we will expand our programs to support entrepreneurship and civil society, education and youth -- because, ultimately, these investments are the best antidote to violence.

"I’d like to speak directly to young people across the Muslim world. You come from a great tradition that stands for education, not ignorance; innovation, not destruction; the dignity of life, not murder. Those who call you away from this path are betraying this tradition, not defending it."

"America Will Not Give Up on the Pursuit of Peace"

The President provided a clear sense of the priorities for American leadership -- from supporting Ukraine, to testing whether a nuclear deal is possible with Iran, to combating climate change and disease, to combating violent extremism.

“This is what America is prepared to do -- taking action against immediate threats, while pursuing a world in which the need for such action is diminished,” he said.

"Peace is not merely the absence of war, but the presence of a better life."

He noted, however, that our country has also failed to live up to our ideals. Ferguson, Missouri -- where a young man was killed and a community was divided -- brought America’s racial and ethnic tensions before the world:

We welcome the scrutiny of the world -- because what you see in America is a country that has steadily worked to address our problems, to make our union more perfect, to bridge the divides that existed at the founding of this nation. America is not the same as it was 100 years ago, or 50 years ago, or even a decade ago.

Because we fight for our ideals, and we are willing to criticize ourselves when we fall short.

Because we hold our leaders accountable, and insist on a free press and independent judiciary.

Because we address our differences in the open space of democracy -- with respect for the rule of law; with a place for people of every race and every religion; and with an unyielding belief in the ability of individual men and women to change their communities and their circumstances and their countries for the better.

After nearly six years as President, I believe that this promise can help light the world.

We stand at a crossroads between war and peace, between disorder and integration, between fear and hope. Watch the President explain why – despite the challenges the world faces -- he, and the United States, will always choose hope.