The First Lady: We've Made "Tremendous Progress" in Educating the World’s Young Women, but There's More Work to Do

September 24, 2014 at 5:56 PM ET by Cameron Brenchley
Twitter Facebook Email
Summary:
In remarks at the U.N. Global Education First Initiative in New York City, First Lady Michelle Obama explains that every young woman on our planet should have the opportunity to learn, grow, and thrive. 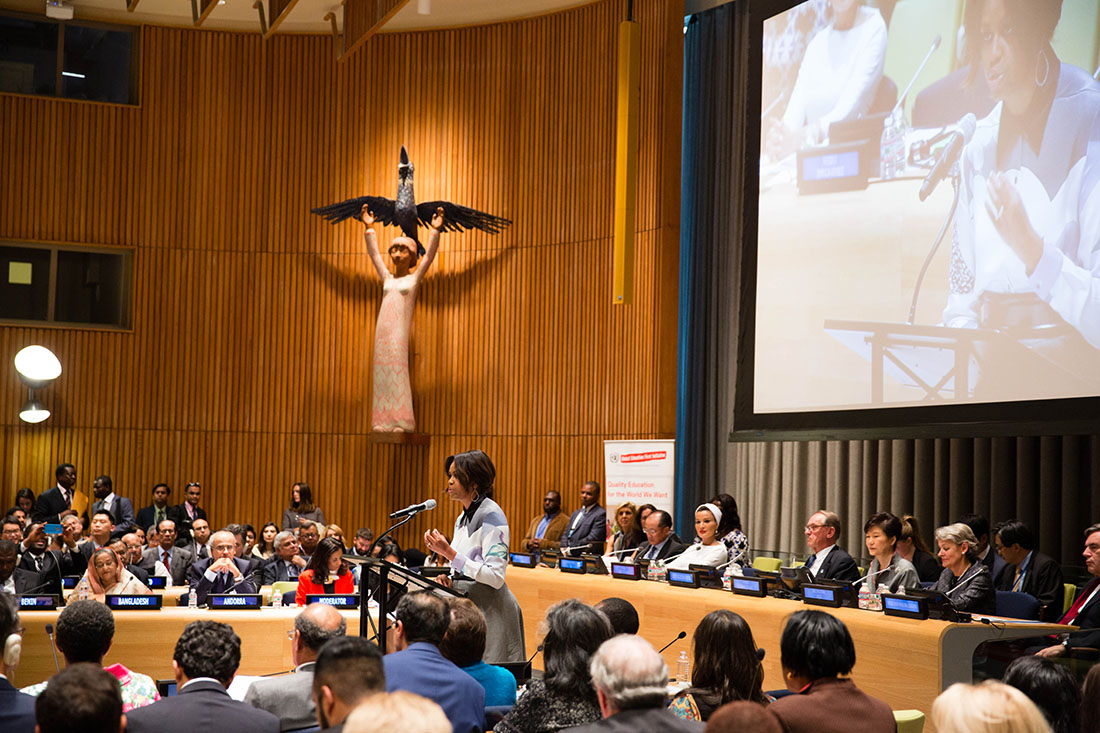 Every young woman on our planet should have the opportunity to learn, grow, and thrive. That was the message delivered earlier today by First Lady Michelle Obama at the U.N. Global Education First Initiative in New York City. The initiative brings together heads of state and government, leading international advocates, and U.N. principals to focus on the importance of a quality education as a way to build a more equitable, prosperous, and sustainable world.

But despite this accomplishment, the First Lady said that we shouldn’t be satisfied:

We know that if we want girls to marry later, raise healthier children, earn good wages, then we need to send them to school through adolescence.  But we also know that adolescence marks the critical moment when a girl starts to develop from a child into a woman; when she is first subjected to the norms and prejudices that her society holds around gender.  And that is precisely when the issue of quality education truly starts to get hard.

The First Lady made clear that it’s not enough to talk about building schools and buying supplies, that it has to be more than just providing resources, that it needs to be about attitudes and beliefs.

It’s about whether fathers and mothers think their daughters are as worthy of an education as their sons.

"It’s about whether communities value young women for their minds, or only for the reproductive and labor capacities of their bodies."

It’s also about whether all of us are willing to confront the complex, sensitive issues that keep so many adolescent girls out of school – issues like early and forced marriage and genital cutting; issues like domestic violence and human trafficking.

The First Lady noted that we can’t hope to make meaningful progress unless we’re willing to have a larger conversation about how women are viewed and treated throughout the world:

All of us -– men and women here in this room and around the world –- we must do some serious self-reflection.  We must look inside ourselves and ask, do we truly value women as equals, or do we see them as merely second-class citizens?  We must look around at our societies and ask, are we clinging to laws and traditions that serve only to oppress and exclude, or are we working to become more equal, more free?

The First Lady said that she is eager to continue this important work “until every young woman on our planet has the opportunity to learn and grow and thrive.”