September 24, 2014 at 4:00 PM ET by David Hudson
Twitter Facebook Email
Summary:
A number of recent reports point to one clear conclusion: The Affordable Care Act is working and making health care more affordable, accessible, and of a higher quality for families, seniors, businesses, and taxpayers.

A number of recent reports point to one clear conclusion: The Affordable Care Act is working and making health care more affordable, accessible, and of a higher quality for families, seniors, businesses, and taxpayers.

For starters, a recent survey by the Kaiser Family Foundation and the Health Research & Educational Trust shows that the average premium for employer-provided family health coverage only went up 3% this year. That's tied for the lowest rate on record since the survey began in 1999. 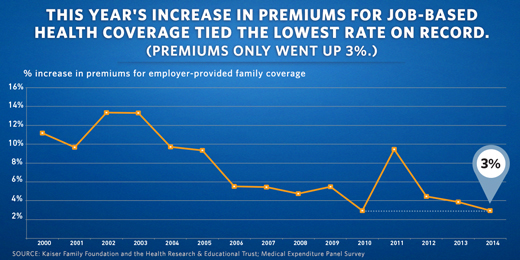 Thanks to the ACA, more workers now have health plans that cap their out-of-pocket spending (medical expenses that aren't reimbursed by insurance). Over the last four years, the percentage of covered workers that have plans with an out-of-pocket limit has increased from 82% in 2010 to 94% in 2014.

That 12-percentage-point increase translates to about 8 million more workers. 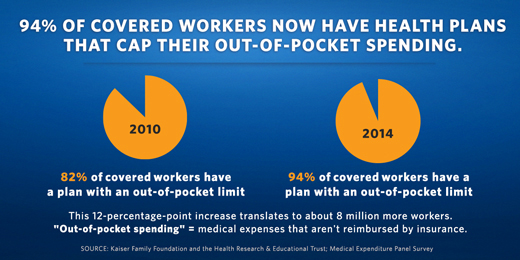 According to a report released today by the Department of Health and Human Services (HHS), hospitals will save $5.7 billion this year in uncompensated care costs – that is, costs borne by hospitals for caring for the uninsured or underinsured who often cannot pay the full cost of their care.

Thanks largely to the ACA, the number of uninsured Americans is down 26%, and hospitals have seen fewer admissions for uninsured patients so far in 2014. And another report released yesterday shows that the Health Insurance Marketplace will include 77 new health insurance issuers in 2015 – a 25% increase – which will give consumers even greater choice for their insurance.

In sum, the Affordable Care Act is working, and evidence is piling up that the law continues to help America’s families, businesses, and taxpayers.