September 25, 2014 at 6:18 PM ET by David Hudson
Twitter Facebook Email
Summary:
President Obama announces that Eric Holder will be stepping down from his current position as U.S. Attorney General. Assuming office in February 2009, Holder's nearly six-year tenure makes him one of the longest-serving Attorney Generals in U.S. history.

In remarks from the White House State Dining Room this afternoon, President Obama announced that Eric Holder will be stepping down from his current position as U.S. Attorney General.

Assuming office in February 2009, Holder's nearly six-year tenure makes him one of the longest-serving Attorney Generals in U.S. history. He will continue to serve as Attorney General until the President nominates his successor, and the successor is confirmed by the Senate.

As the President noted, Holder's career in public service "began nearly 40 years ago as a young prosecutor in the Department that he now runs." Over his career, Holder has served at the Department of Justice under six U.S. presidents -- including serving as acting Attorney General at the beginning of President George W. Bush's first term. 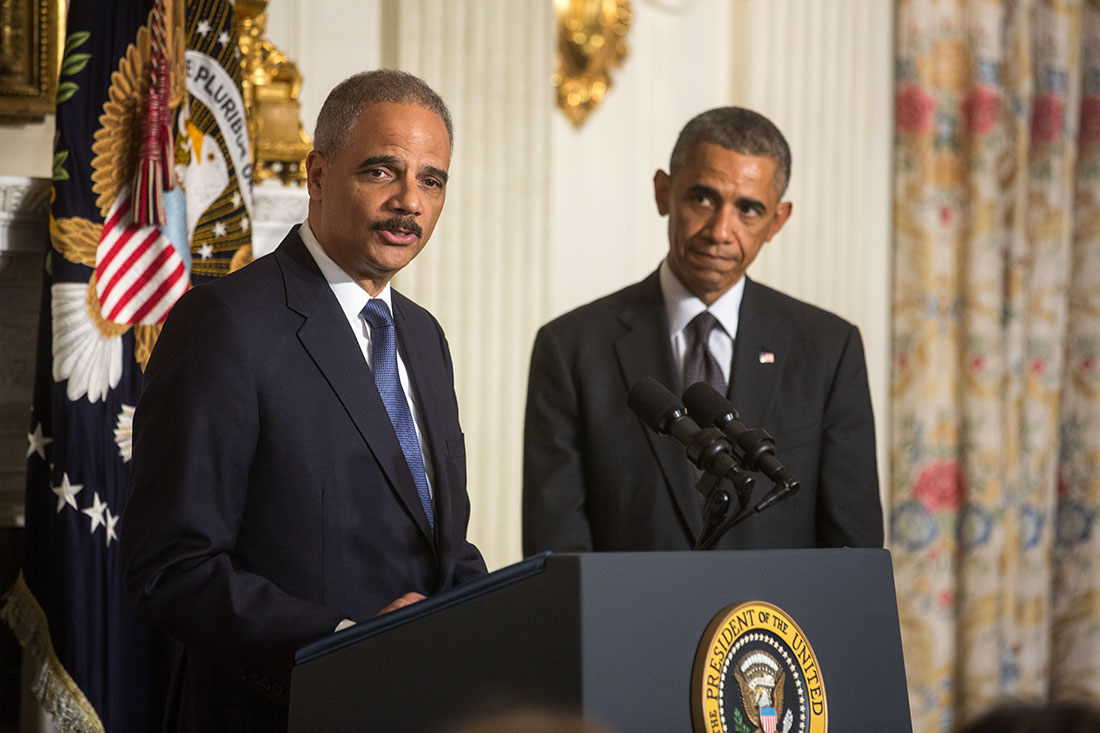 "As younger men, Eric and I both studied law," President Obama said. "And I chose him to serve as Attorney General because he believes, as I do, that justice is not just an abstract theory. It’s a living and breathing principle."

That’s why I made him America’s lawyer, the people’s lawyer.

"I chose him to serve as Attorney General because he believes, as I do, that justice is not just an abstract theory. It’s a living and breathing principle." 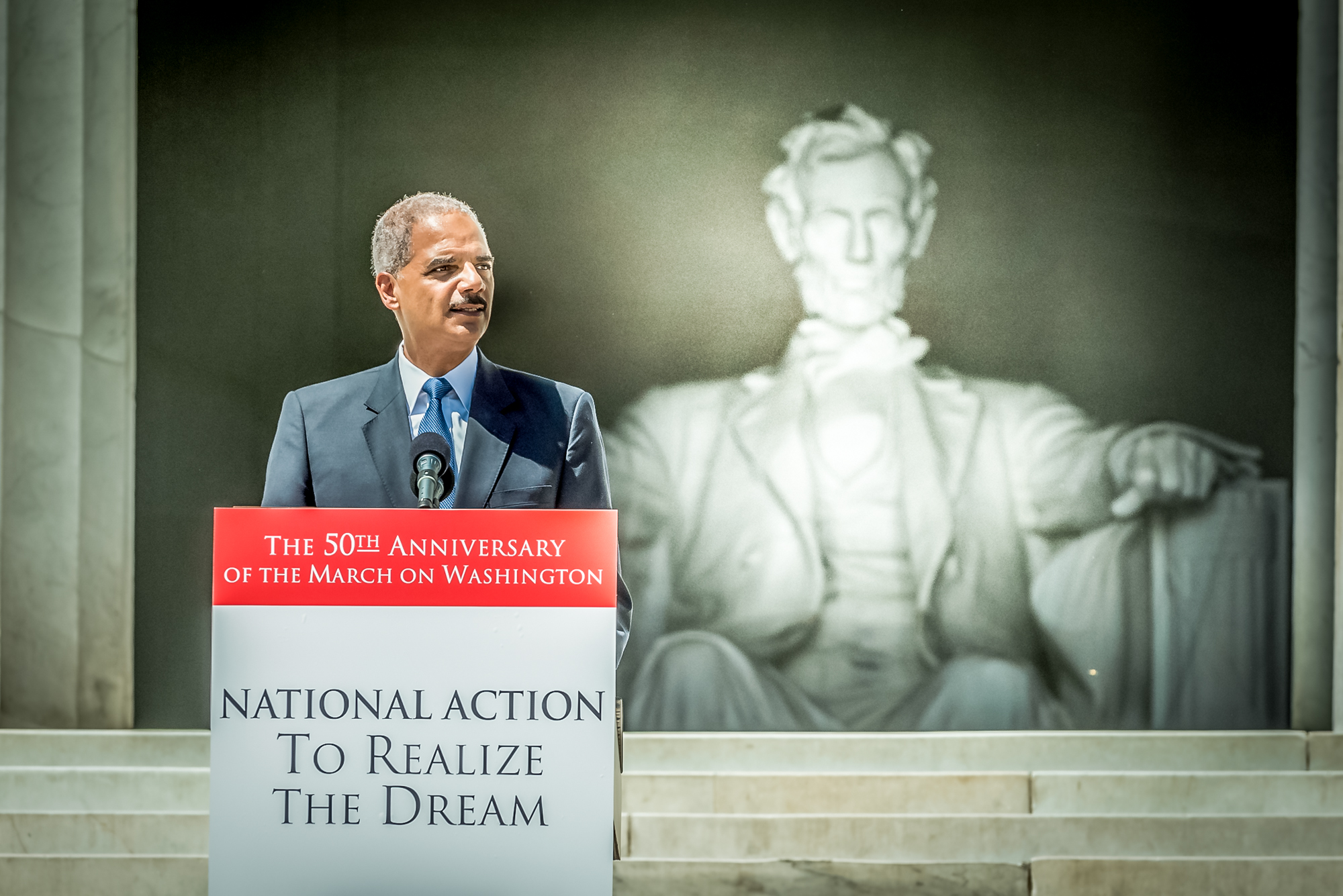 President Obama went on to detail the portfolio that Holder assumed as Attorney General -- from counterterrorism to civil rights, and from public corruption to white-collar crime -- emphasizing the "superb job" that Holder has done:

He’s worked side by side with our intelligence community and the Department of Homeland Security to keep us safe from terrorist attacks and to counter violent extremism.  On his watch, federal courts have successfully prosecuted hundreds of terror cases, proving that the world’s finest justice system is fully capable of delivering justice for the world’s most-wanted terrorists.

He’s rooted out corruption and fought violent crime.  Under his watch, a few years ago, the FBI successfully carried out the largest mafia takedown in American history.  He’s worked closely with state and local law enforcement officers to make sure that they’ve got the resources to get the job done.  And he’s managed funds under the Recovery Act to make sure that when budgets took a hit, thousands of cops were able to stay on the beat nationwide.

He’s helped safeguard our markets from manipulation, and consumers from financial fraud.  Since 2009, the Justice Department has brought more than 60 cases against financial institutions, and won some of the largest settlements in history for practices related to the financial crisis, recovering $85 billion -- much of it returned to ordinary Americans who were badly hurt.

He’s worked passionately to make sure our criminal justice system remains the best in the world.  He knows that too many outdated policies, no matter how well-intentioned, perpetuate a destructive cycle in too many communities.  So Eric addressed unfair sentencing disparities, reworked mandatory minimums, and promoted alternatives to incarceration.  And thanks to his efforts, since I took office, the overall crime rate and the overall incarceration rate have gone down by about 10 percent.  That’s the first time that they’ve declined together, at the same tim, in more than 40 years.

The President noted that Holder's "proudest achievement," however, may be his efforts to reinvigorate and restore the Civil Rights Division of the Justice Department -- through critical work on issues such as voting rights, immigration law, human trafficking, and same-sex marriage:

He has been relentless against attacks on the Voting Rights Act -- because no citizen, including our servicemembers, should have to jump through hoops to exercise their most fundamental right.  He’s challenged discriminatory state immigration laws that not only risked harassment of citizens and legal immigrants, but actually made it harder for law enforcement to do its job.

Under his watch, the Department has brought a record number of prosecutions for human trafficking, and for hate crimes -- because no one in America should be afraid to walk down the street because of the color of their skin, the love in their heart, the faith they practice, or the disabilities that they live with.

He’s dramatically advanced the cause of justice for Native Americans, working closely with their communities.  And several years ago, he recommended that our government stop defending the Defense of Marriage Act -- a decision that was vindicated by the Supreme Court, and opened the door to federal recognition of same-sex marriage, and federal benefits for same-sex couples. It's a pretty good track record.

"Soon, Eric, [his wife] Sharon, and their kids will be a bit freer to pursue a little more happiness of their own," President Obama said. "And thanks to Eric’s efforts, so will more Americans -- regardless of race or religion, gender or creed, sexual orientation or disability, who will receive fair and equal treatment under the law." 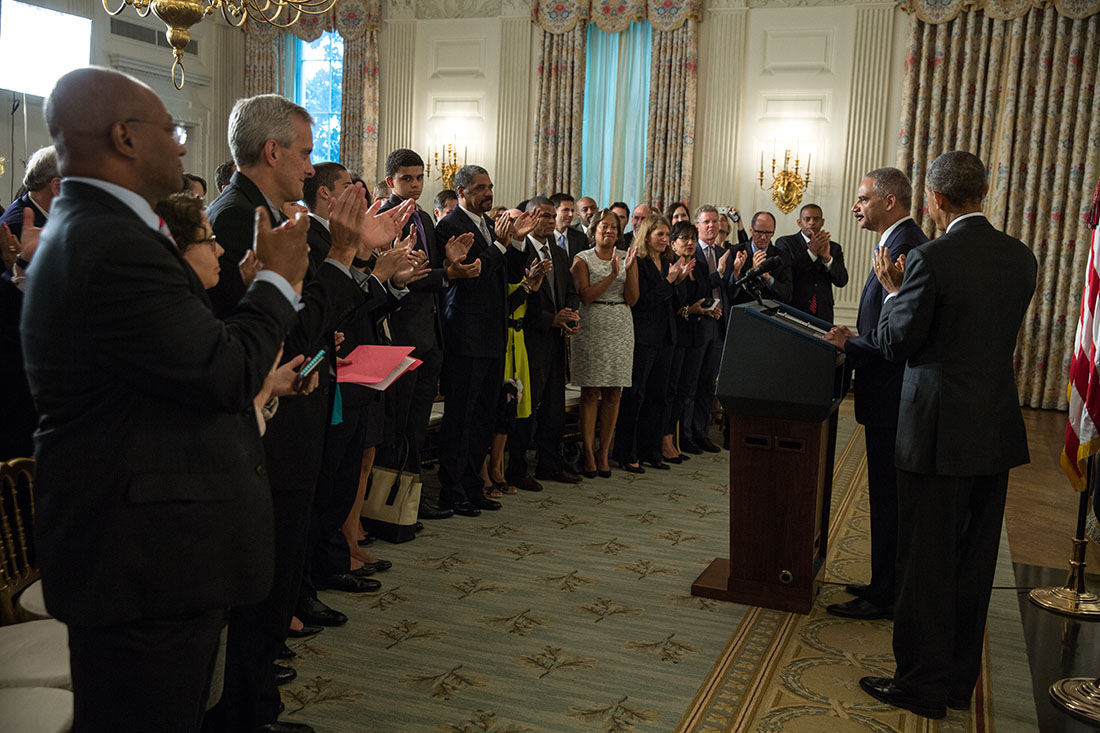 Holder then came to the podium and spoke for a few minutes following the President's remarks, reflecting on his tenure and thanking a number of people -- including his wife and children; his late parents, Eric and Miriam Holder; and the President and other Administration officials -- for their support and friendship.

"Work remains to be done, but our list of accomplishments is real."

"I have loved the Department of Justice ever since as a young boy I watched Robert Kennedy prove during the Civil Rights Movement how the Department can and must always be a force for that which is right," Holder said. "I hope that I have done honor to the faith that you have placed in me, Mr. President, and to the legacy of all those who have served before me."

Attorney General Holder made clear that even after he steps down from his current position, he won't leave the work:

In the months ahead, I will leave the Department of Justice, but I will never -- I will never -- leave the work.  I will continue to serve and try to find ways to make our nation even more true to its founding ideals.

I want to thank the dedicated public servants who form the backbone of the United States Department of Justice for their tireless work over the past six years, for the efforts they will continue, and for the progress that they made and that will outlast us all.

And I want to thank you all for joining me on a journey that now moves in another direction, but that will always be guided by the pursuit of justice and aimed at the North Star.

Read the President's and the Attorney General's full remarks here. 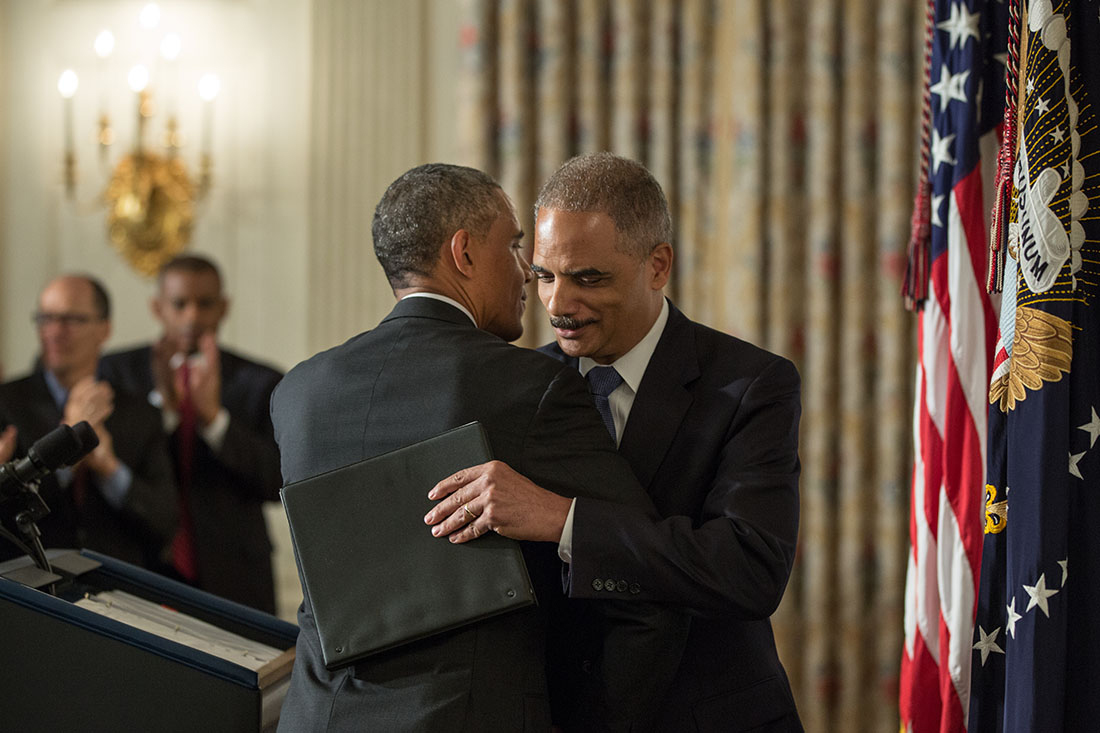