September 26, 2014 at 4:22 PM ET by Melissa Rogers
Twitter Facebook Email
Summary:
The White House Office of Faith-based and Neighborhood Partnerships, Department of Education, and Corporation for National and Community Service hosted a gathering to kick off the President’s Fourth Annual Interfaith and Community Service Campus Challenge.

Acting on a recommendation by the first Advisory Council on Faith-based and Neighborhood Partnerships, President Obama established the Interfaith and Community Service Campus Challenge to build bridges of understanding across our differences, especially among rising leaders, and to serve our neighbors. Interfaith service involves people from different religious and non-religious backgrounds tackling community challenges together – for example, Protestants and Catholics, Hindus and Jews, and Muslims and non-believers – building a Habitat for Humanity house together. Interfaith service impacts specific community challenges, while building social capital and civility.

This week, the White House Office of Faith-based and Neighborhood Partnerships, Department of Education, and Corporation for National and Community Service hosted a gathering to kick off the President’s Fourth Annual Interfaith and Community Service Campus Challenge. More than 500 college students, chaplains, faculty, and administrators – including over 50 college presidents – participated in the two-day event.

The Challenge has grown by leaps and bounds since 2011 when President Obama first encouraged college presidents to establish or expand programs in interfaith and community service. Currently, more than 400 institutions of higher education participate in the Challenge.

The national gathering this week began with Cecilia Muñoz, Director of the White House Domestic Policy Council, welcoming college presidents and supporters. It concluded with remarks by Treasury Secretary and former member of the CNCS Board of Directors, Jack Lew, and a showing of the award-winning film, Of Many, which follows the friendship and interfaith partnership of New York University’s Imam Khalid Latif and Rabbi Yehuda Sarna. These two sessions bookended a series of fascinating panel discussions, presentations, and community conversations involving a diverse array of academics, students, advocates, governmental officials, and think tank scholars.

A new step forward for the Challenge this year was the fact that recognition for interfaith community service was included in the President’s Higher Education Community Service Honor Roll. The Honor Roll, launched in 2006, annually highlights the role colleges and universities play in solving community problems and placing more students on a lifelong path of civic engagement by recognizing institutions that achieve meaningful, measureable outcomes in the communities they serve. The President’s Honor Roll now recognizes higher education institutions in four categories: General Community Service, Interfaith Community Service, Economic Opportunity, and Education. Also for the first time this year, a school was selected as a winner of a Presidential Award for Interfaith Community Service. That honor went to Loras College, a Catholic affiliated school in Dubuque, Iowa. One of the school’s many achievements is partnering with the AmeriCorps VISTA program to recruit and retain volunteers to tackle a range of challenges. This year and every year, the Campus Challenge demonstrates President Obama’s longstanding commitment to expanding and supporting national service, which he recently highlighted at the White House’s 20th Anniversary of AmeriCorps celebration.

Thanks to all who make the goals of interfaith and community service a priority, and a very special thanks to the Department of Education’s Center for Faith-based and Neighborhood Partnerships for its leadership in planning and organizing this week’s event. We are excited about future of the Challenge.

If you’d like to learn more about the President’s Interfaith and Community Service Campus Challenge, contact the Center for Faith-based and Neighborhood Partnerships at the Department of Education at EdPartners@ed.gov. 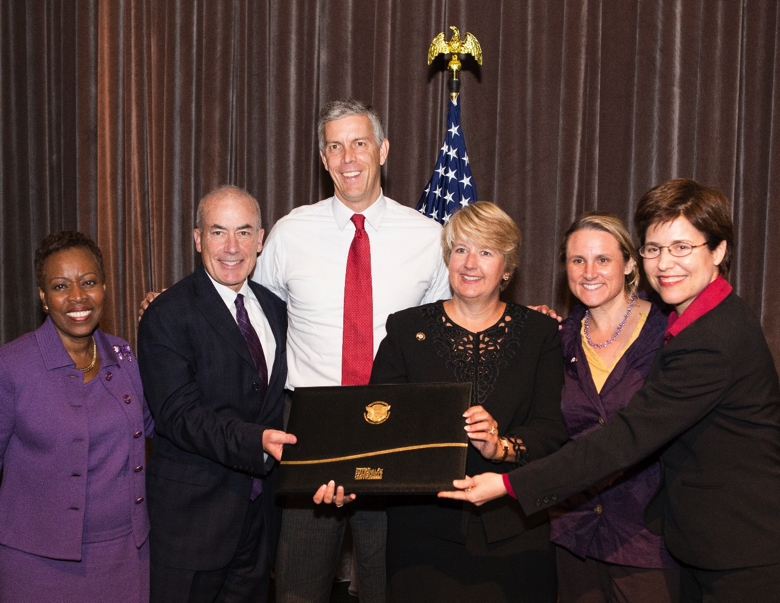 Melissa Rogers is the Executive Director of the White House Office of Faith-Based and Neighborhood Partnerships.