October 2, 2014 at 3:40 PM ET by Tanya Somanader
Twitter Facebook Email
Summary:
The story of the last six years is the story of progress.

The story of the last six years is the story of progress. In 2009, businesses were laying off 80,000 Americans a month. The unemployment rate sat at 10 percent. Manufacturing lagged behind while health care costs skyrocketed. And the deficit stood at nearly 10 percent of our economy.

Now, thanks to the determination of the American people and the decisions of the Obama administration, our economy is telling a remarkable story. Businesses have added 10 million jobs over 52 straight months of job growth, the longest streak on record. The unemployment rate has fallen to 6.1 percent, there are more job openings now than at any time since 2001, our country is the most attractive location in the world for investment, health care prices have risen at the lowest rate in nearly 50 years since the Affordable Care Act, and the deficit is approaching three percent of our economy.

President Obama laid out these facts today in an address to the young entrepreneurs of Northwestern University's School of Management. "It is indisputable that our economy is stronger today than it was when I took office. By every economic measure," he said. "At the same time, it also indisputable that millions of Americans don't yet feel enought of the benefits of a growing economy where it matters most -- and that's in their own lives."

"Our economic greatness rests on a simple principle: When the middle class thrives and people can work hard to get into the middle class, America thrives. When it doesn't, America doesn't."

These truths are not incompatible. "Our task now is to harness the momentum that is real, that does exist, and make sure that we accelerate that momentum -- that the economy grows, and jobs grow, and wages grow. That's our challenge."

To answer that challenge, the President is pursuing policies that will invest in the five key cornerstones to lay the new foundation of America's 21st century economy. They include:

1.      New investments in the energy and technologies that make America a magnet for good, middle-class jobs

2.      New investments in education that will make our workforce more skilled and competitive

3.      New reforms to health care that will cut costs for families and businesses

4.      New savings in our federal budget that get our fiscal house in order for future generations

5.      New rules for our financial system to protect consumers and prevent the kind of crisis we endured from happening again

Historically, our economic greatness rests on a simple principle: when the middle class thrives and people can work hard to get into the middle class, America thrives. When it doesn’t, America doesn’t.

"Here’s the bottom line," the President said. "For all the work that remains, for all the citizens we still need to reach, what I want people to know is that there are some really good things happening in America":

For the first time, we can see real, tangible evidence of what the contours of the new economy will look like. It’s an economy teeming with new industry and commerce, and humming with new energy and new technologies, and bustling with highly skilled, higher-wage workers.

It’s an America where a student graduating from college has the chance to advance through a vibrant job market, and where an entrepreneur can start a new business and succeed, and where an older worker can retool for that new job. And to fully realize this vision requires steady, relentless investment in these areas. We cannot let up and we cannot be complacent. We have to be hungry as a nation. We have to compete. When we do -- if we take the necessary steps to build on the foundation that through some really hard work we have laid over the last several years -- I promise you, over the next 10 years we’ll build an economy where wage growth is stronger than it was in the past three decades.

If we rebuild roads and bridges, we will put construction workers and engineers on the job; we'll revitalize communities, connect people to jobs, and help businesses ship goods around the world.

If we help first-time homebuyers get a loan, we'll speed up the housing market recovery and people's efforts to build a future.

If we keep investing in clean energy technology, we'll put people back to work on the assembly lines and prevent the worst costs of climate change down the road.

If we make high-quality preschool available to every child, we'll give our children a safe place to learn while giving parents the support they need to go to work.

If we redesign our high schools and set higher standards, we will graduate more kids with the real-world skills that lead to good jobs in the new economy.

If we fix our broken immigration system, if we raise the minimum wage, if we make sure women are paid equal to a man for her work, we will make our economy stronger. "That's the truth," he said.

President Obama appealed to Republicans in Congress to end the gridlock that is constricting our economic growth:

I’m going to keep making the argument for these policies, because they are right for America. They are supported by the facts. And I’m always willing to work with anyone, Democrat or Republican, to get things done. And every once in a while, we actually see a bill land on my desk from Congress, and we do a bill signing and I look at the Members, and I say -- I tell them “Look how much fun this is! Let’s do it again. Let's do it again.”

But if gridlock prevails, if cooperation and compromise are no longer valued, but vilified, then I will keep doing everything I can on my own if it will make a difference for working Americans.

"This is our moment to define what the next decade and beyond will look like," the President said. "This is our chance to set the conditions for middle-class growth in the 21st century."

"America’s economic greatness has never trickled down from the top. It grows from a rising, thriving middle class and opportunity for working people. That’s what makes us different."

President Obama left the students -- and every American striving to succeed in the new American century -- with a challenge: "As you chase your own success, I challenge you to cultivate more ways to help more Americans chase their success." 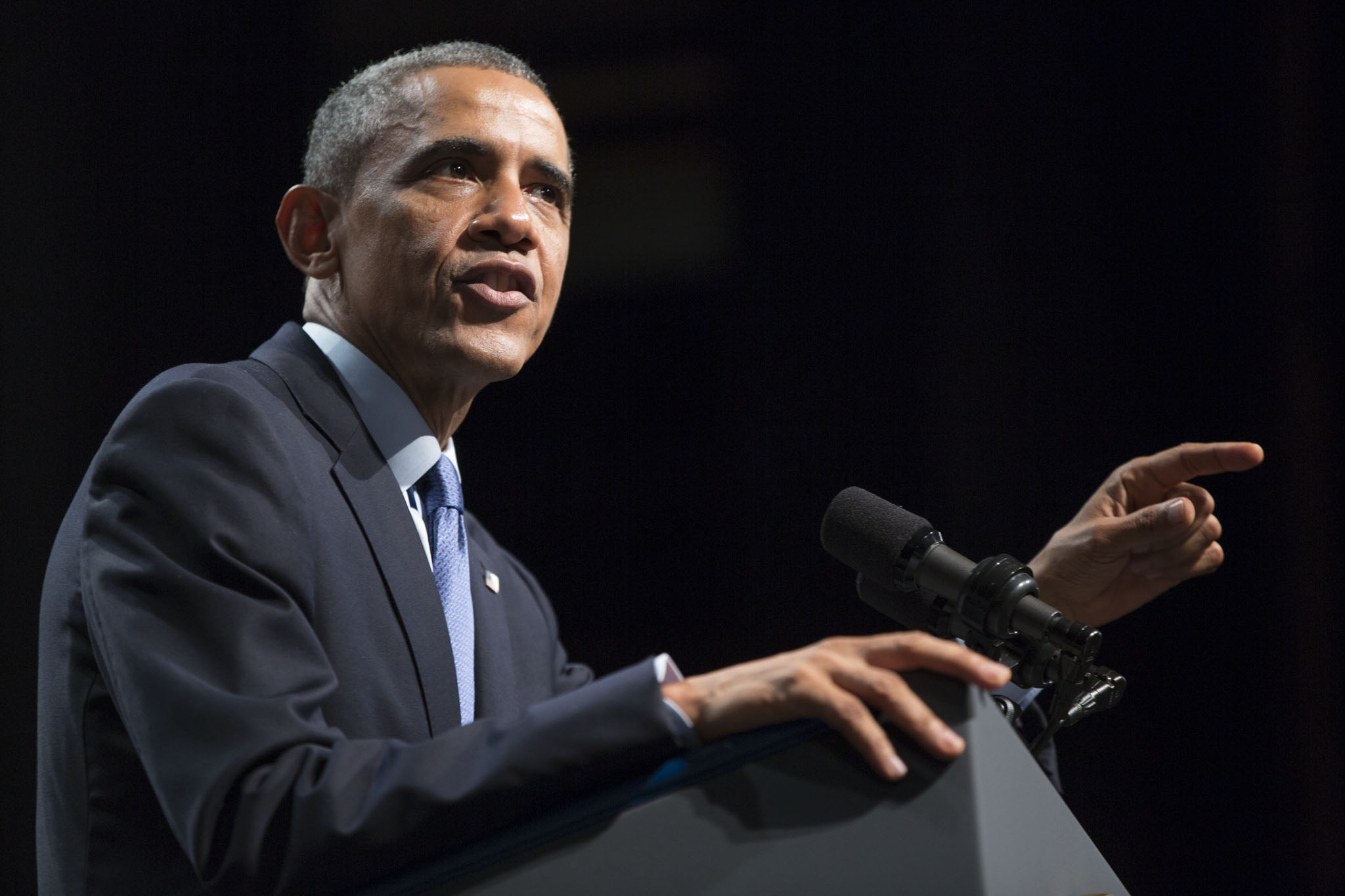