Chart(s) of the Week: American Manufacturing is Growing Stronger Every Day

October 3, 2014 at 1:45 PM ET by Jason Miller
Twitter Facebook Email
Summary:
The story of American manufacturing is the story of progress. Take a look at how far American businesses and manufacturer have come over the last 14 years.

"When our manufacturing base is strong, our entire economy is strong. Today, we continue our work to bolster the industry at the heart of our Nation. With grit and resolve, we can create new jobs and widen the circle of opportunity for more Americans."

American businesses have officially added more than 10.3 million jobs over the last 55 months, the longest streak of private-sector job growth in history. That unprecedented growth is due, in part, to a key cornerstone of our economy: American manufacturing.

Thanks to the hard work of American businesses and the policies of President Obama, our manufacturing sector has added more than 700,000 new jobs since February 2010, the fastest pace of job growth since the 1990s. In fact, manufacturing has grown at nearly twice the rate of the economy overall, marking the longest period of outpacing the economy since the 1960s.

The story of American manufacturing is the story of progress. Take a look at how far American businesses and manufacturers have come in the last four years: 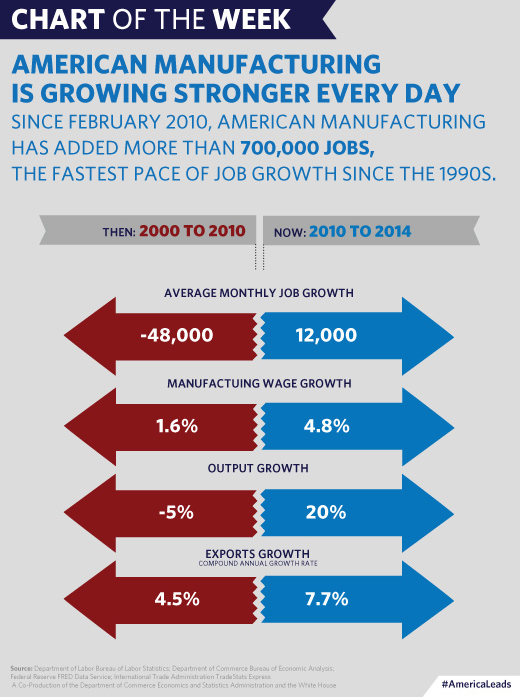 Over the last six years, the Obama administration has been focused on laying a new foundation for lasting global competitiveness and making America a magnet for good, middle-class jobs. Here are three things you need to know about where American manufacturing now stands in the world:

1. America's manufacturing sector is now more globally competitive than it has been in decades. 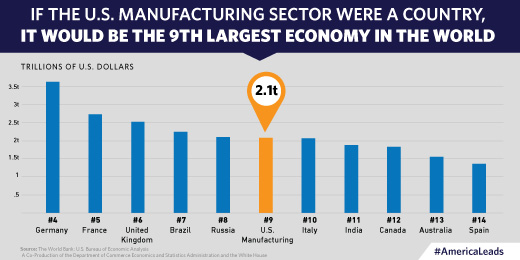 Due to the productivity of American workers, abundant and low-cost energy, and unparalleled access to innovation, it is more competitive to manufacture in the United States than in any other advanced economy. In 2013, 54 percent of executives say they were actively considering relocating production from China to the U.S. and righ now, we are opening new factories at the fastest rate in over 20 years.

Last year, at a time when other advanced nations were losing global export share, the United States global share of manufacturing exports grew faster than that of any country in the world except for China.

2. Manufacturing supports more than 17 million jobs -- or 1 in every 7 private-sector workers. 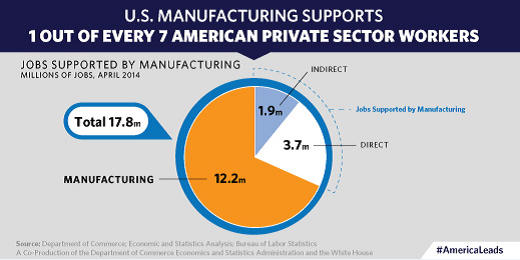 3. America is now the best place for manufacturers to do business. 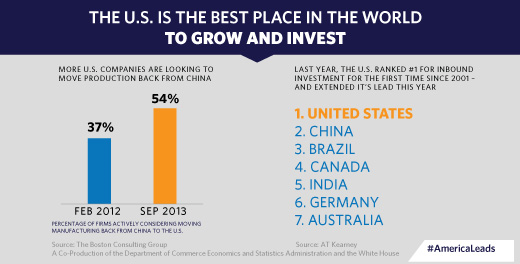 President Obama is continuing to strengthen American manufacturing by investing in regional manufacturing hubs; calling for direct investments that support innovation, research, and development; and promoting job training initiatives that will help students and workers retool to ensure this sector is fueled by the best-trained, most highly-skilled workforce in the world.

Along with these efforts, the Obama administration is promoting new ways to spur innovation and ensure America is #1 in the world for manufacturing:

Click here to learn more about how the Obama administration is partnering with businesses and communities to ensure American manufacturing continues to drive and define the new foundation of America's 21st century economy.