Chart of the Week: The Deficit Falls to Its Lowest Level Since 2007

A cornerstone of America’s 21st century foundation requires that we get our fiscal house in order for the long run, so we can afford to make investments that strengthen the middle class. That is why President Obama has made it a priority to enact policies that ensure our deficit, or the amount we spend that exceeds our revenues, doesn’t undercut our future.

Thanks to a growing economy, prudent spending cuts, and asking the wealthiest Americans to pay a little bit more on their taxes, we’ve cut our deficits by two-thirds over the last five years. In fact, the Office of Management and Budget and the Treasury Department announced today that the deficit has fallen to 2.8 percent of GDP, the lowest level since 2007 and less than the average of the last 40 years.

Take a look at the chart of the week to see how the deficit has declined at the fastest sustained pace since World War II: 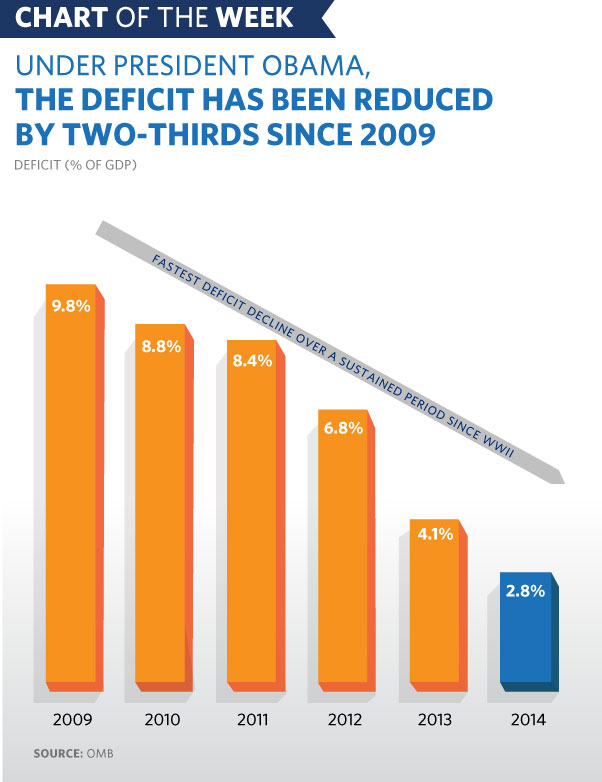 Despite this important progress, there is still much more we can do. That's why the President put forward a budget that promotes long-term economic growth by investing in areas like education and infrastructure to expand opportunity for the middle class.

The budget also continues to bring down deficits to about 2 percent of GDP by the end of the next decade through common-sense immigration reform, closing tax loopholes to ensure the wealthy pay their fair share, and continuing the reforms begun by the Affordable Care Act, which has contributed to a historic slowdown in health care costs.

Read more about the President’s FY2015 budget here to see his plan to accelerate economic growth for all Americans.