“Entrepreneurship is in the DNA of this Generation”: The President’s Innovation Town Hall

October 20, 2014 at 9:23 AM ET by Doug Rand
Twitter Facebook Email
Summary:
Last week, the President held a town hall meeting at a collaborative work space in Los Angeles to discuss a wide range of issues of core importance to entrepreneurs, especially entrepreneurs from the millenial generation. 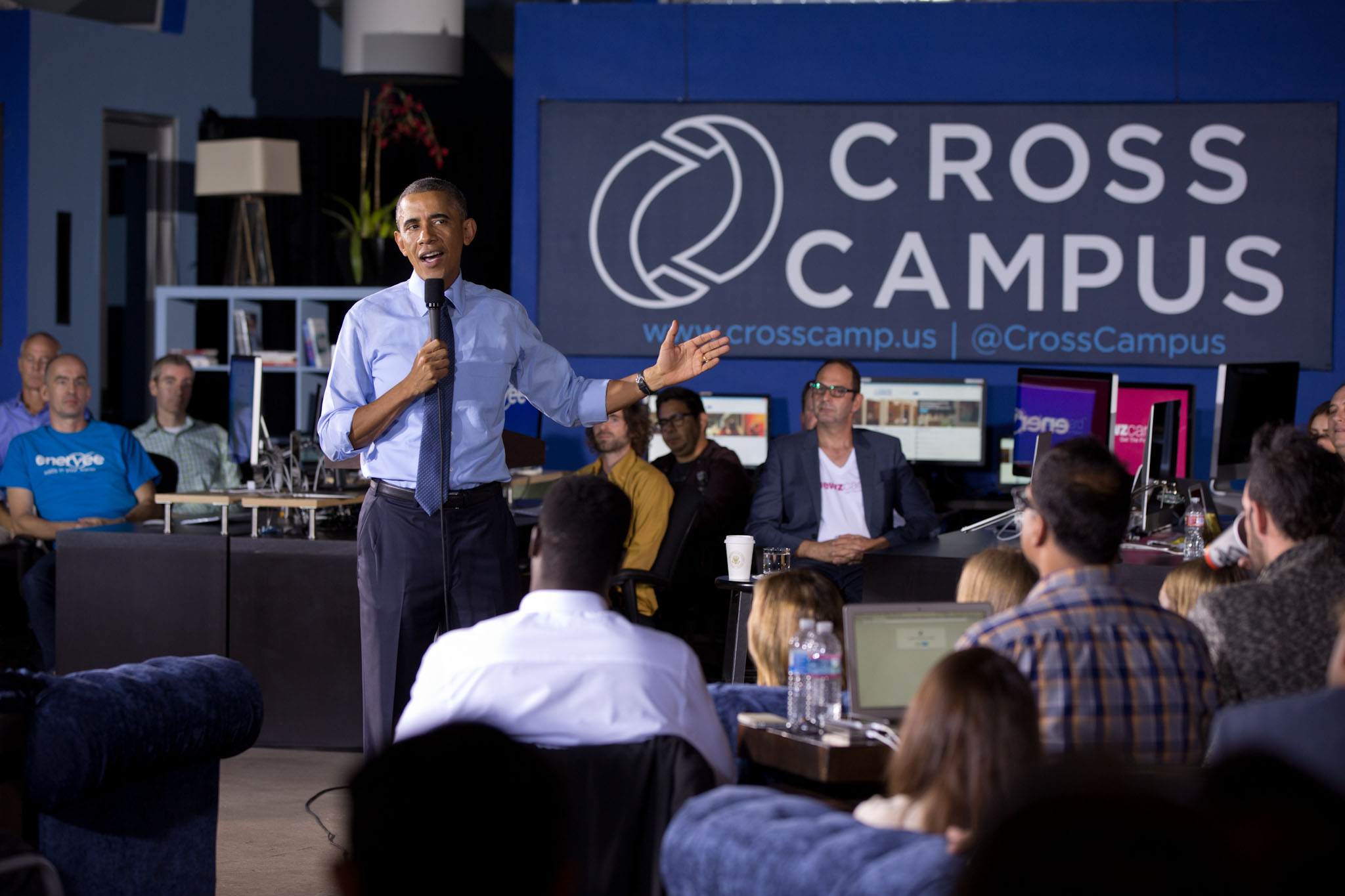 Earlier this month, the President held a town hall meeting at Cross Campus, a collaborative work space in the Los Angeles Area that brings together entrepreneurs, freelancers, creative professionals, and other innovators, many from the millennial generation. A new White House report on millennials highlights the entrepreneurial ambition of this generation, with the majority interested in starting a new business.

In conversation with the Cross Campus community, the President spoke about a wide range of issues of core importance to entrepreneurs (and considered a post-White House job offer from one of them, noting that “being able to dabble a little bit in the issues of the day while being in sweat pants and a baseball cap sounds pretty attractive”). Here are some highlights:

“I made a commitment very early on that I am unequivocally committed to net neutrality. I think that it is what has … unleashed the power of the Internet, and we don't want to lose that or clog up the pipes.”

“We know that when it comes to tech, a huge percentage of some of our biggest startups, like Intel and Google, were started by first-generation Americans, immigrants. We know that about 25 percent of our Nobel Prize winners in the sciences are naturalized Americans. And so the idea that we would make it harder for talent to come here -- especially when so often that talent is coming to study here, going to school here, wants to stay here, wants to work here, wants to invest here -- makes no sense… And what I’ve committed to is, is that assuming Congress does not act, I will use all the executive authority that I legally have in order to make fixes in some of the system.”

Growing Startup Communities Across the Country

“[T]here’s nothing wrong with folks obviously going into finance, but if our best talent for numbers are all ending up on Wall Street instead of ending up as engineers, then over time our economy is going to be out of balance… And we’ve actually got a public-private initiative to get 100,000 more engineers. A lot of that then is trying to tap new talent, people who probably would make great engineers but right [now] are ending up being diverted someplace else.”

Tapping All of America’ Tech Talent

“How do we encourage more women but also minorities into STEM fields -- science, technology, engineering, math. On average, wages are about 33 percent higher than non-STEM occupations, and yet, women are not at all represented the way they should be in these fields -- neither are African Americans or Latinos… We have an entire effort, through the Department of Education, giving grants and incentives to school districts to encourage traditionally underrepresented groups to get into STEM.”

“We’ve acted to give nearly 5 million Americans the chance to cap their student loan payments at 10 percent of their income, which means that they can afford to go out and take a risk.”

“The Affordable Care Act means that if you’re a young entrepreneur, you don’t have to be locked into a job worrying that otherwise you won’t have health insurance because now you’re able to get an affordable plan through the marketplace exchanges that have been set up.”

The Promise of Millennials

“[Y]ou have the opportunity in ways that previous generations did not have to create something yourself, to be your own boss, to have flexibility with respect to your hours, to pursue your dreams, to raise capital in creative ways, to bust down some of the barriers … and gatekeepers that traditionally existed in every industry. And that’s hugely exciting.”

You can read or watch the full town hall conversation, and the full White House report on millennials is available here. You can also learn more about the White House Startup America initiative to accelerate the success of entrepreneurs across the country.

As the President said in LA last week, “when I come to places like this, it inspires me and reminds me of why I am chronically optimistic about the future of America.” Contact us and let us know how you’re building a strong foundation for entrepreneurs in your community.

Doug Rand is Assistant Director for Entrepreneurship at the White House Office of Science and Technology Policy.