Active Monitoring and the Latest Steps in Our Response to Ebola

October 22, 2014 at 7:29 PM ET by Tanya Somanader
Twitter Facebook Email
Summary:
President Obama meets with Ebola Response Coordinator Ron Klain and Administration officials to discuss how we can prevent the spread of Ebola here at home. 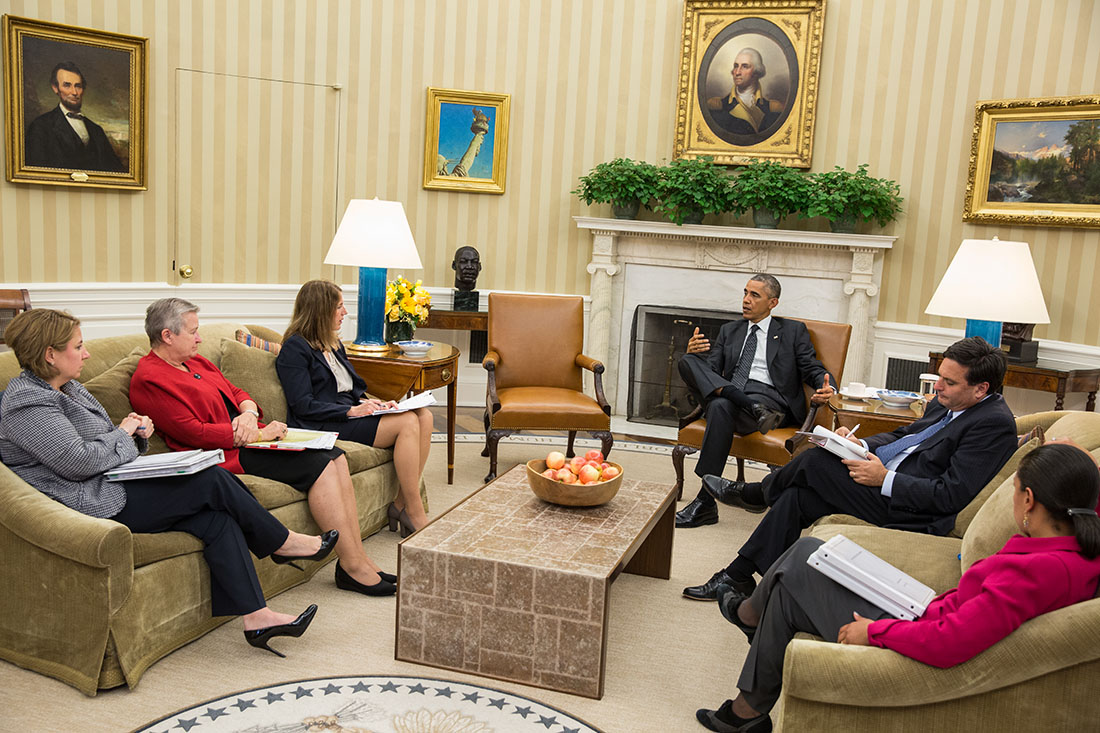 The United States continues to lead a comprehensive effort to enhance our preparedness to respond to Ebola here at home, while also tackling the epidemic at its source in West Africa. From helping hospitals improve training and care to coordinating and contributing significant resources to fight the disease at its source, the Administration is working to help keep Americans safe.

Today, President Obama met with Ebola Response Coordinator Ron Klain and Administration officials to discuss the latest steps we're taking to prevent the spread of Ebola here at home. One way is through active monitoring, a procedure the Centers for Disease Control and Prevention (CDC), in coordination with local health authorities, is putting in place to ensure travelers from the affected countries of Liberia, Sierra Leone, and Guinea will report their temperature and symptoms to health officials for 21 days. The CDC will work with state and local officials of six states -- New York, Pennsylvania, Maryland, Virginia, New Jersey, and Georgia, which are the destinations for the majority of travelers from the three countries -- to actively monitor them.

Through active monitoring and airport screening, we will have the infrastructure in place to monitor nearly all travelers who are coming from West Africa. As the President said, we've made great progress in bolstering domestic preparedness in the U.S.:

First of all, we now have seen dozens of persons who had initial interaction with Mr. Duncan, including his family and friends, and in some cases people who have had fairly significant contact with him, have now been cleared and we’re confident that they do not have Ebola. ...

In addition, what we’ve also seen is two American patients, who got Ebola outside but were brought here to be treated, have now been cleared. They have been cured, and we’re obviously very happy about that. I know their families are thrilled about that.

And finally, we also received news that, according to the World Health Organization, both Nigeria and Senegal are Ebola-free. Now, these are countries that are adjoining the three West African countries that are experiencing the most severe aspects of this disease. And again, it gives you some sense that when it’s caught early, and where the public health infrastructure operates effectively, this outbreak can be stopped.

From surging resources to both Dallas and Cleveland, to refining guidelines on personal protective equipment, to assuring every hospital has a plan to respond to Ebola, we can ensure that our health care system is fully prepared to treat an Ebola case should another arise while protecting the public. "This is a disease where if it’s caught early and the hospital knows what to do early, it doesn’t present a massive risk of spreading," the President said. "But we have to make sure that everybody is aware of it."

In order to truly protect the American public, we must help eliminate the spread of Ebola in West Africa. That is why the President has committed significant resources -- and our U.S. military -- to the international response:

What we’re doing, which nobody else really has the capacity to do, is to build the infrastructure -- the logistical systems, the air transport, the construction -- so that, as other countries start making contributions, they can be confident that it’s going to get in where it’s most needed, and it’s going to be coordinated effectively. And we just want to thanks, as always, our men and women in uniform who are doing an outstanding job there.

The Ebola cases in the U.S. are "a reminder of how important our public health systems are," the President said.

In some ways, this has created a trial run for federal, state and local public health officials and health care providers, as well as the American people, to understand the nature of that and why it’s so important that we’re continually building out our public health systems but we’re also practicing them and keeping them in tip-top shape, and investing in them, because oftentimes the best cure [is] to prevent getting diseases in the first place.