Chart of the Week: Catching Up with the Competition on Infrastructure Investment

October 24, 2014 at 3:27 PM ET by Marc Aidinoff
Twitter Facebook Email
Summary:
The U.S. is lagging behind other advanced countries when it comes to total transportation investment. Take a look at this chart to see exactly where the U.S. ranks when it comes to investment in our basic infrastructure.

The Vice President has been traveling across the country, making the case that we need to invest in American infrastructure. Since 2009, the Obama administration has improved over 350,000 miles of roads, more than 6,000 miles of rail, and repaired or replaced over 20,000 bridges. As the Vice President says, “These are long-term investments in the health, the might and the dynamism of this country.”

The world is not waiting, and the U.S. is lagging behind other advanced countries when it comes to total transportation investment.

Take a look at this chart to see where the U.S. ranks when it comes to investment in our basic infrastructure: 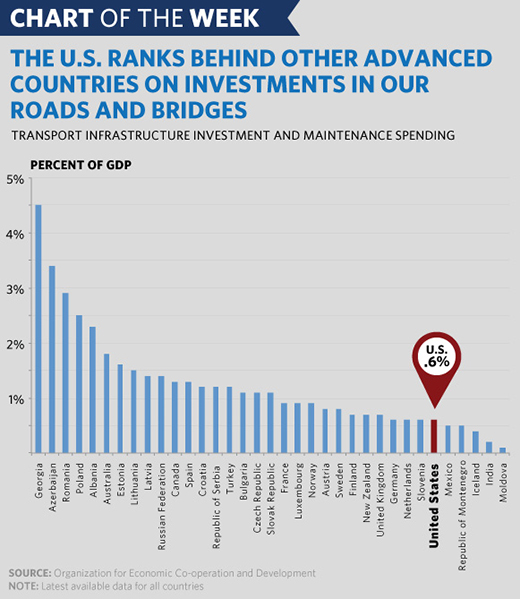 Businesses locate where they can get product to and from the floor and off the floor as rapidly and cheaply as possible. Whether it’s expanding ports from Baltimore to Houston to accommodate larger ships or expanding railroads to carry twice as much cargo, investment in infrastructure supports American exports and, therefore, American jobs here at home.

But the U.S. ranks well behind countries like Russia, Germany, Serbia, and Estonia in our investment in our infrastructure network. This lack of funding impacts how America is viewed as a place to do business.

And the middle class is picking up the tab: For 90 percent of Americans, 1 in 7 dollars goes to transportation.

We cannot afford to ignore our public infrastructure. That is why President Obama and Vice President Biden continue to push for a multi-year transportation investment. Read more about the President’s vision for a 21st century transportation system here.

Because the United States should never be 28th in anything.