CDC: Monitoring Symptoms and Controlling Movement to Stop the Spread of Ebola

Ed. Note: This factsheet is cross-posted from the Centers for Disease Control and Prevention (CDC). Read the original factsheet in its entirety here.

Yesterday, based on the best medical science, the CDC updated its guidance to provide new information for public health officials on monitoring people who may have been exposed to Ebola; overseeing their care; and -- when warranted to protect the public health or our communities -- limiting their movement or activities.

These guidelines are crafted to keep the American public safe while not unnecessarily discouraging these workers from serving on the frontlines against this disease. They are heroes whose courage is worthy of our praise. Through these changes, we will help ensure that their symptoms are monitored and a system is in place to quickly recognize when they need to be routed to care. These actions will better protect potentially exposed individuals and the American public as a whole.

Key Changes to the Movement and Monitoring Guidance:

The new guidance defines four risk levels based on degree of exposure:

Public health officials will use these risk levels along with assessing symptoms to decide how best to monitor for symptoms and what other restrictions may be needed. The table on the following page provides further information about CDC’s recommended action for each risk level.

Recommended actions for symptomatic people with fever or other Ebola symptoms*

High, some, and low risk categories

These people MUST have a medical examination to make sure they don’t have Ebola. They will remain isolated in a hospital until doctors and public health officials are certain that Ebola is not a concern.

These people might need to have a medical examination for other diseases (not Ebola).

Recommended actions for people without symptoms 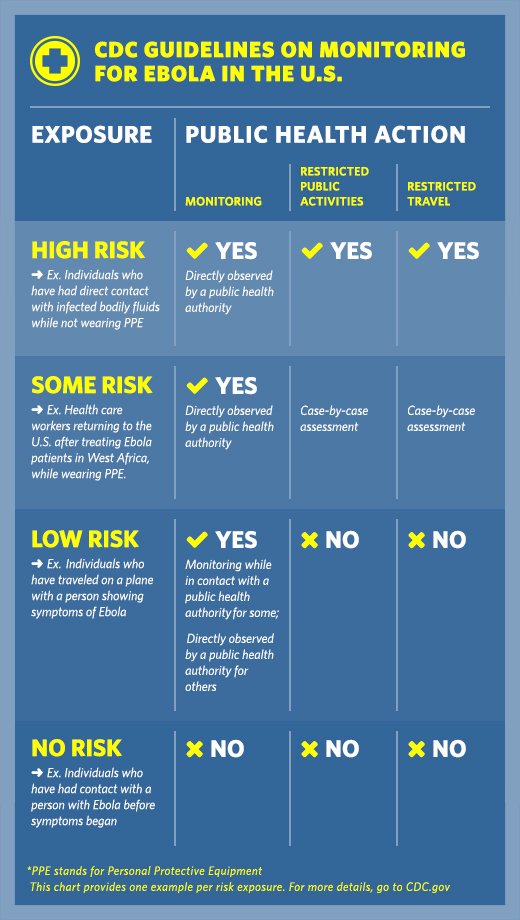 Below are the definitions of actions that are recommended in the new guidance based on risk levels and symptoms. Public health actions, such as isolation of symptomatic people, active monitoring or direct active monitoring of people without symptoms, and travel restrictions when needed, help protect the public by preventing the spread of disease:

New guidance for monitoring and determining exposure risk of returning health care workers to the U.S.