Advance Estimate of GDP for the Third Quarter of 2014

Economic growth in the third quarter was strong, consistent with a broad range of other indicators showing improvement in the labor market, rising consumer sentiment, increasing domestic energy security, and continued low health cost growth. Since the financial crisis, the U.S. economy has bounced back more strongly than most others around the world, and the recent data highlight that the United States is continuing to lead the global recovery. Nevertheless, more must still be done to boost growth both in the United States and around the world by investing in infrastructure, manufacturing, and innovation; and to ensure that workers are feeling the benefits of that growth, by pushing to raise the minimum wage and supporting equal pay.

1. Real gross domestic product (GDP) grew 3.5 percent at an annual rate in the third quarter of 2014, according to the advance estimate from the Bureau of Economic Analysis. The strong growth recorded in each of the last two quarters suggests that the economy has bounced back strongly from the first-quarter decline in GDP, which largely reflected transitory factors like unusually severe winter weather and a sharp slowdown in inventory investment. In the third quarter, net exports made a large positive contribution to growth, while consumer spending and business investment grew at a somewhat slower pace than the previous quarter. 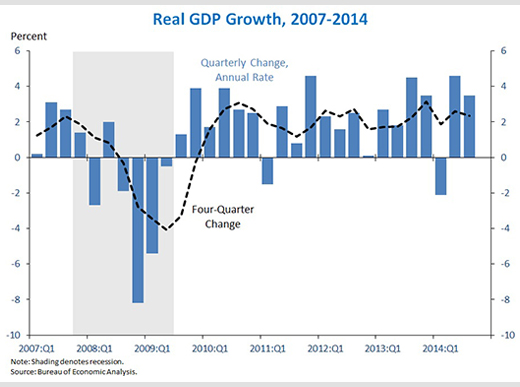 2. Export growth has picked up slightly to a 4.6 percent pace over the last four quarters, despite the continued substantial slowdown in the GDP growth of our major trading partners since 2010. Over the four quarters ended 2014:Q2, the real GDP of our major trading partners (weighted by their purchases of U.S. exports) grew 2.4 percent, up slightly from the recent low seen in 2013, but still well below the 4.8 percent growth seen over the four quarters of 2010. This slowdown reflects not just challenges in the euro area, but also slower growth in several key emerging market economies like China, Mexico, and Brazil. U.S. export growth has largely mirrored this foreign growth, and so has rebounded from its lows in early 2013 but still remains below levels seen previously in the recovery. To boost exports, the President continues to encourage countries around the world to adopt pro-growth policies, but also to move ahead with trade and investment deals that will bring mutual benefits to both the United States and its trading partners. 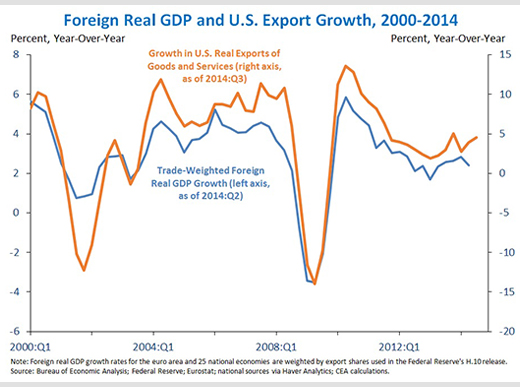 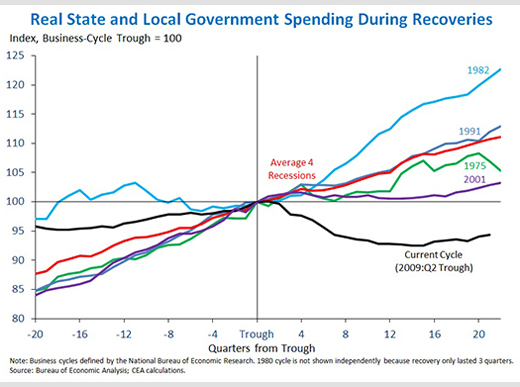 4. The overall price index for GDP has risen 1.6 percent over the past four quarters, continuing a trend of subdued inflation since the end of the recession. Within the aggregate GDP index, the price index for personal consumption expenditures was up just 1.5 percent over the past four quarters, and an identical rate was observed for the “core” (excluding food and energy) components of personal consumption. The price indexes for a number of other components of GDP—including business equipment and State and local spending—also continue to grow at sub-2 percent year-over-year rates. One factor contributing to low inflation in recent years has been the marked slowdown in health care price inflation. Since mid-2010, the price index for health care services has risen at roughly the same pace as overall GDP prices, an unusual development since health care prices have tended to increase noticeably faster than GDP prices for much of the past 50 years. 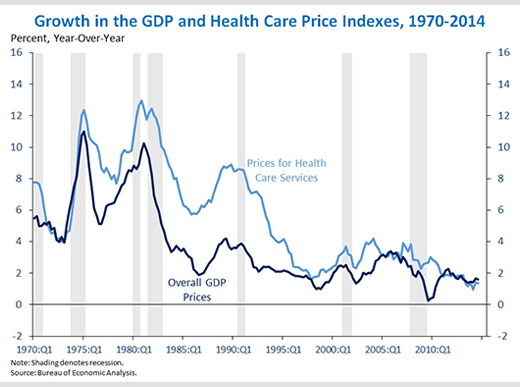 5. Real private domestic final purchases (PDFP)—the sum of consumption and fixed investment—is up 2.8 percent over the last four quarters, a faster four-quarter growth rate than real GDP. Real PDFP growth is generally a more stable and forward-looking indicator than real GDP because it excludes highly volatile components like inventory investment and net exports. In the first and second quarters of this year, GDP growth fluctuated widely, but PDFP was positive in both quarters, showing a less sharp pattern of decline and rebound. In the third quarter, PDFP grew a bit more slowly than GDP, but on balance, it has risen faster over the past year and continued its historical pattern of more steady growth. 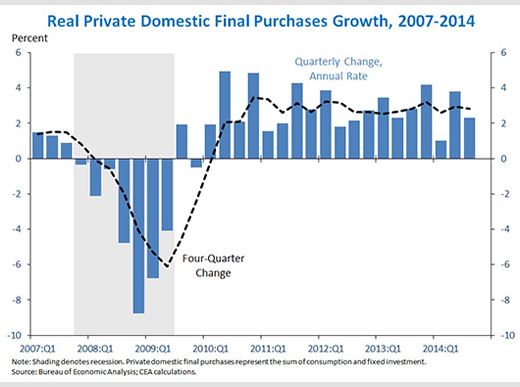