Chart of the Week: In 2014, Women Continue to Earn Less Than Men

October 31, 2014 at 1:32 PM ET by Tanya Somanader
Twitter Facebook Email
Summary:
On average, women who work full-time all year make $0.78 for every dollar a man earns. That gap is even larger for women of color.

We live in a world where women play a foundational role in the strength and growth of our economy.

Today, women are the primary breadwinners in more households than ever before. They're graduating from college and graduate school at higher rates than men, and account for almost half of all students in law, businesses and medical school. From doctors and dentists to managers and scientists, women in today’s world are increasingly entering what were once male-dominated occupations.

And yet, despite decades of progress for women in the workplace, one unfortunate fact remains: Women still earn less than men for the same work. As the President said in Providence, Rhode Island today, "At a time when women are the primary breadwinners in more households than ever, that hurts the whole family if they’re not getting paid fairly."

On average, women who work full-time all year make 78 cents for every dollar a man earns. That gap is even larger for women of color. For African American women, it’s 64 cents, and for Hispanic women, it’s 56 cents.

Take a look at this week’s chart to see how unequal pay persists for hardworking American women: 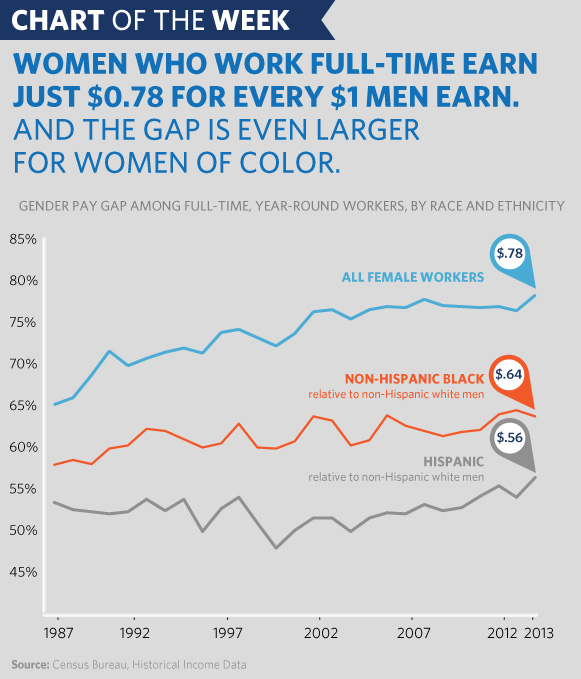 The fact is that women are starting their careers with lower pay, and that gap widens over time. Whether they get passed over for promotions, receive fewer raises, or take time off to care for their family members, the wage gap only grows for women. Because of women’s increasing importance to their families’ financial health, policies to raise the wages of working women, such as raising the Federal minimum wage to $10.10 per hour, ending pregnancy discrimination, and increasing pay transparency, can help narrow the gender pay gap and help families overall.

The President's Council of Economic Advisors estimates that increasing the wages of working women by 10 percent would lift nearly 1.3 million individuals out of poverty and close the gender wage gap by 8 cents.

President Obama has taken action to close the gap. From the Lilly Ledbetter Fair Pay Act to his executive actions strengthening enforcement of equal pay laws, he’s doing what he can to help women fight for the equal pay they deserve. But he cannot act alone. Congress can help make equal pay a reality by passing the Paycheck Fairness Act,  legislation that will close loopholes that allow employers to avoid responsibility for pay discrimination. Unfortunately, Republicans in Congress are standing against the Paycheck Fairness Act, continually blocking its passage in both the Senate and the House.

Equal pay for equal work is more than a slogan -- it is the kind of principle that will make a real difference in the livelihoods of hardworking American women and their families. There is more work to do to ensure that women receive the equal rights and equal opportunities they deserve. Because when women succeed, America succeeds.